These Cilantro Bombs are an easy way to store fresh herbs for the winter. They’re great to use in soups or stir into pasta!

So the other day, my wife and I were planning a recipe that called for cilantro.  In the summer, we grow cilantro in our garden (by the way, it’s really easy to grow!), but it’s currently about 20 degrees outside my door…which means no cilantro growing in the backyard right now!  So we decided to grab some cilantro at the market on the way home from work.  The problem is not that we forgot to pick up the cilantro…but rather we both picked up the cilantro!  So now I am looking at 2 bunches of cilantro, and I only need a small amount for the current recipe.  Has something like this ever happened to you?

In previous years, I would have just used the necessary cilantro and then let the rest of it sit in the fridge until it was wilted.  Eventually it would have been trashed.  But I’ve become fond of making bombs out of extra herbs.  Yes, bombs.  At least that’s I call them.  I simply put the herbs in a food processor with some olive oil and other spices (if desired) and then pulse the mixture until it forms a paste.  Freeze these in small portions and boom–you’ve got a cilantro bomb!  Now, when its time to make a soup or saute chicken, I can pull out one or two of these bombs and I have instant flavor in the dish.  Talk about an easy way to create quick flavor and save a bit of money–I keep a bag of these bombs in the freezer at all times! 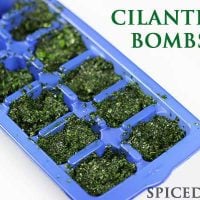 Tip: You might need to use a small butter knife or other tool to help the bombs pop out of the ice cube trays.

Note: These cilantro bombs have tons of uses!  If you are making a homemade soup, just drop 1-2 of these in.  If you are sauteing chicken, drop a cilantro bomb in the pan (you don’t need to defrost it) and let it melt.  Then your pan will be perfect for the chicken or other meat.  If you have other ideas for how to use these flavor bombs, don’t hesitate to let me know!