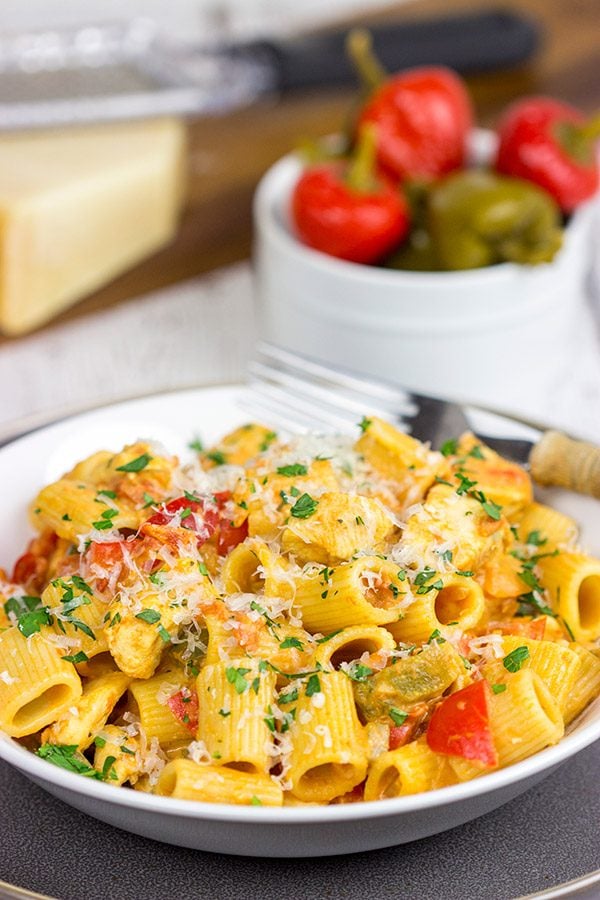 Every part of the country has it’s unique contributions to the food scene.  I grew up on Lowcountry recipes from the South Carolina coast and Cajun recipes from south Louisiana, and I often return to these recipes as they are comfort food to me.  It’s hard to beat a good chicken and sausage gumbo on a cold winter day!  Likewise, Mardi Gras season always leads to a craving for cinnamon King Cake.  (Mental note: I really need to update those photos!  The recipes are excellent.  The photos are not.  I’ll get around to that one day…maybe when Robbie turns 18.) 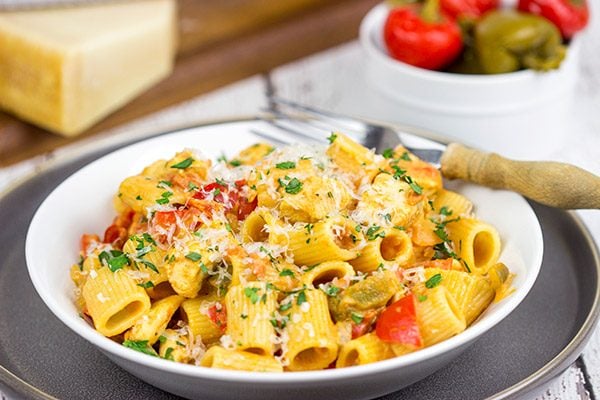 In our travels, we’ve come across a bunch of fun new recipes that I’ve slowly added to this virtual recipe box that I call a blog.  And today we add a new one.  Chicken Riggies.  Have you ever heard of Riggies?  No?  Chicken Riggies are wildly popular in the Utica area of central New York.  (In fact, Chicken Riggies are sometimes called Utica Riggies.)  Like much of the regional cuisine in this part of the country, Riggies rely heavily on an Italian influence.  Le’ts admit it: the name isn’t very original.  Chicken Riggies is a pasta dish (rigatoni!) served with chicken.  But don’t let that fool you!  Chicken Riggies are anything but boring.  Plus, it’s kinda fun to say Riggies.

Like most regional recipes, there is much debate on the origin of Chicken Riggies.  Everyone has a favorite family version that has been passed down for years.  And now we do, too!  One of the most distinguishing characteristics of Riggies is the use of a tomato cream sauce.  Laura and I were out to dinner last week, and I was telling her that I much prefer a standard tomato sauce over a tomato cream sauce.  Then I turned around and made Riggies for dinner.  She was all like, “But…but…but.”  And I was all like, “But Riggies.” 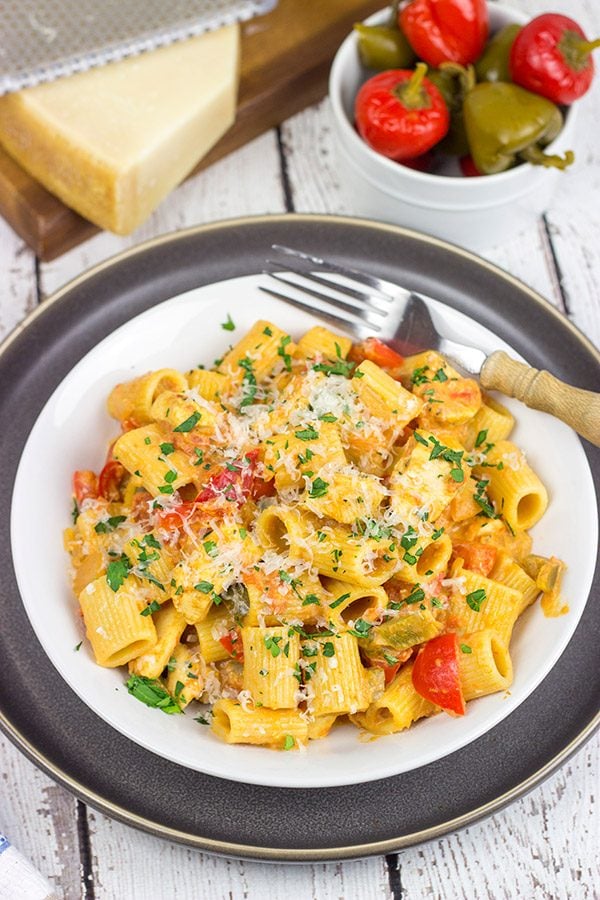 I first discovered Riggies when I went with my buddies to a curling tournament in Utica last year.  Nearly every person in our club told me I had to try chicken riggies while I was there.  I dutifully did as I was told, and I was hooked!  Chicken Riggies are packed with flavor, and they make for a fun twist on pasta night around our house. 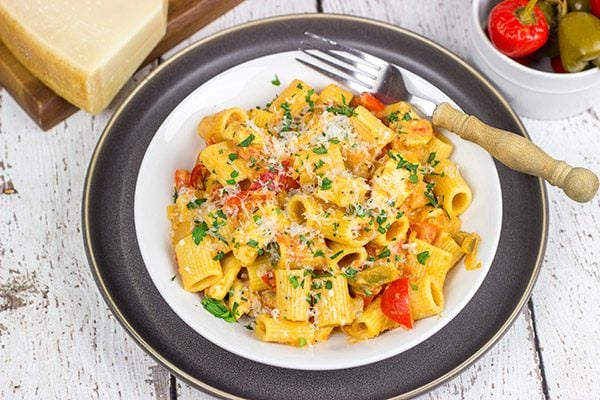 Aside from the tomato cream sauce (which is silly easy to make), Chicken Riggies often include sweet or hot cherry peppers.  I’ve never cooked with hot cherry peppers before, but I grabbed a jar from the store the other day.  Conveniently, the only jar of hot peppers they had was huge.  I say ‘conveniently’ with a bit of sarcasm as I only needed 3-4 peppers for this recipe.  I was thinking “What the heck am I going to do with the rest of these hot peppers now?”  Well the answer is make more Chicken Riggies.  Seriously.  It’s delicious!  (On a side note, I found 4 peppers brought plenty of heat to this recipe, but we like spicy food.  Feel free to adjust to your tastes, or just use sweet cherry peppers instead.) 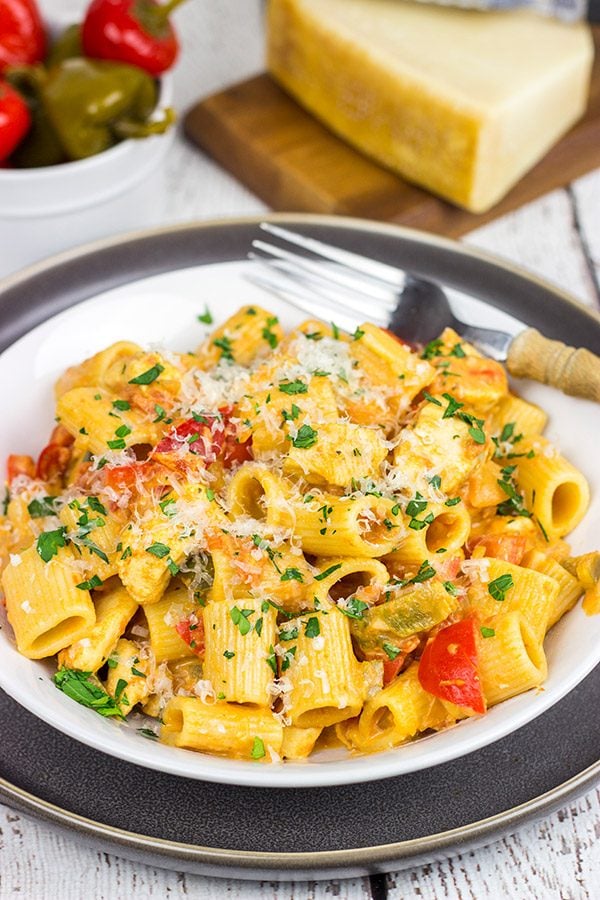 Finally, I must note that while we enjoyed the chicken, we felt it wasn’t really needed.  Sure, Chicken Riggies without the chicken just become Riggies, but I’m ok with that.  The sauce and the hot cherry peppers bring so much flavor that the chicken kinda gets lost.  In fact, Laura even suggested that we use ground Italian sausage next time.  Sausage Riggies?  I’m not sure that’s a thing (and I’m sure the mere thought offends half the population of upstate New York), but I’m just saying it would be delicious.  Cheers, friends! 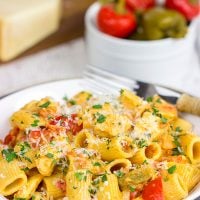 For the Chicken Riggies

If hot cherry peppers aren’t available in your area, use crushed red peppers flakes in the sauce instead. Just be mindful of how much you use!