Lightly spiced with cinnamon and cardamom, this Caramel Chai Pound Cake is a delicious dessert.  Serve it with a scoop of vanilla ice cream for a tasty summer treat! 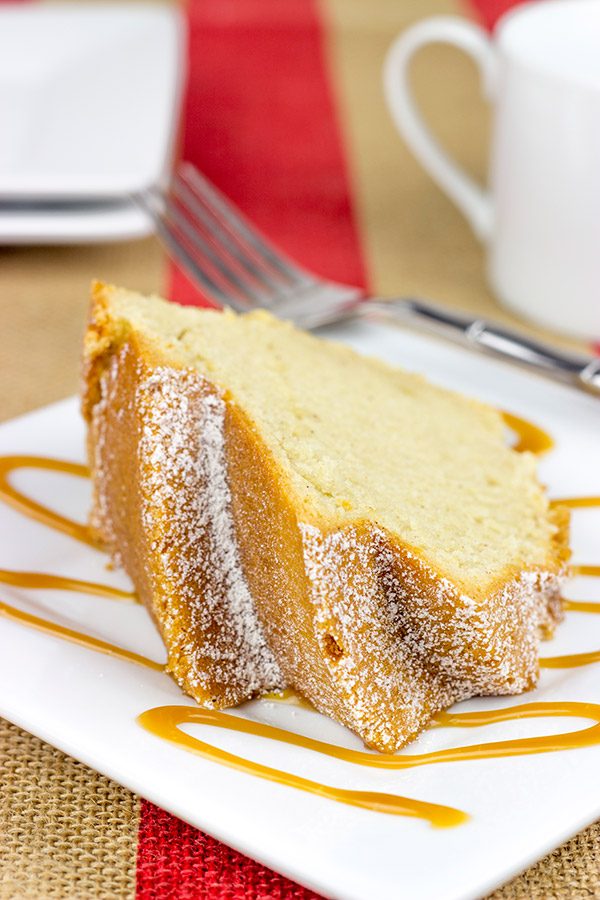 You guys know that I love sports.  College sports are my favorite, but I’ll honestly sit down and watch almost any sport I can find.  Even golf.  Ok, maybe that’s a stretch.  I put watching golf into the same category as watching pro baseball on tv.  If I want to take a nap, then I turn on golf or pro baseball.  Nap accomplished.

Back when my wife and I lived in Atlanta, we had the chance to go to a bunch of sporting events.  Conference championships for college football.  Conference tournaments for college basketball.  A couple of pro football games, too.  And then there was that semi-pro football game.  Note: I use the term semi-pro very loosely here.  I mean very loosely.  I also use football to describe the American version of the game as opposed to the international version.  That’s soccer. 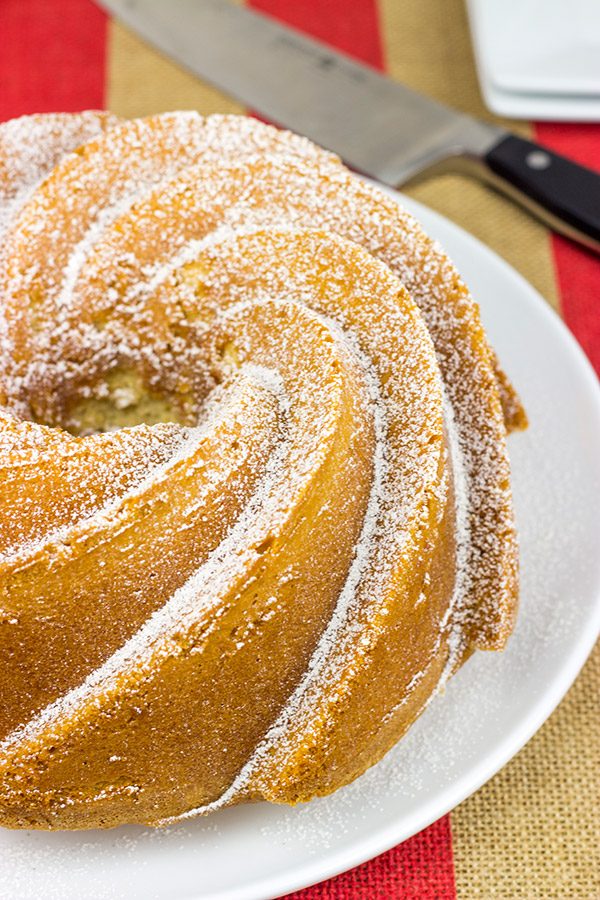 I’d never even heard of semi-pro football until we met one of our good friends.  He just so happened to be a great punter.  He actually went to the professional combines and got called back by a pro team.  He didn’t end up making the cut, but he was darned close.  I kinda wish he had made the cut because (a) it would have been awesome to know someone who played pro football and (b) I wouldn’t have been subjected to that semi-pro game back in Atlanta.  (For the record, I am not insulting our friend at all here.  He readily admitted that the semi-pro league was a joke.) 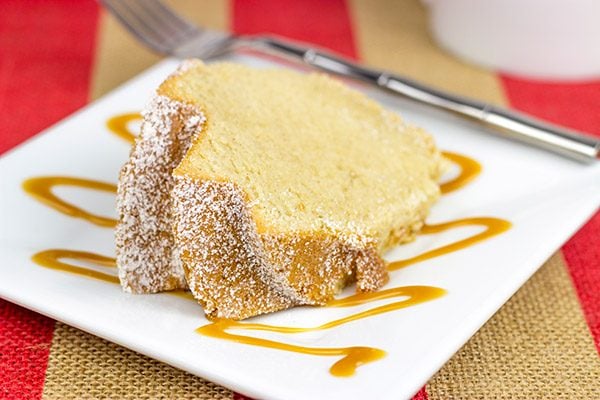 So what was the deal with this semi-pro game, you ask?  Well, let me set the stage.  The games were played on Saturdays on high school fields around the Atlanta area.  That’s fine.  Some of the high schools in Atlanta are larger than colleges.  There were probably 150 fans in attendance, and most of them were friends and family of the players.  Again, that’s fine.  That’s why we were there.

But the game started much later than expected.  I believe it was supposed to kickoff at 7:00pm, and I think it started somewhere around 9:45pm instead.  The game before ran late.  I mean, I get running late…but almost 3 hours late?  At some point right after halftime, the refs decided to speed the game up by just not stopping the clock.  Incomplete pass?  Clock kept running.  First down?  Clock kept running.  I’m pretty sure there was a timeout in there and the clock kept running. 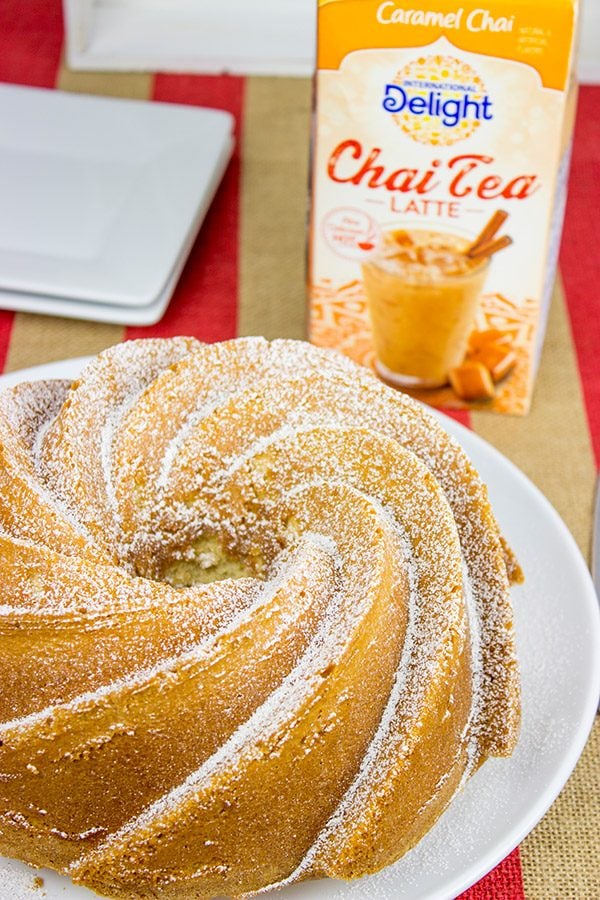 Then there was the 25-yard penalty.  For all of you that know football rules, you should be aware that there is no 25-yard penalty.  I don’t even remember what the call was, but the referee totally walked off 25 yards.  Huh?  (I asked our friend later about that, and he said he didn’t even know what the ref was doing.)  Oh, and I forgot to mention that the game announcer got thrown out because he got in a fight with one of the refs…over the loud speaker.  Yeah, that happened.

So while that was our first and last semi-pro football game, I’m still glad we went to support our friend.  He and his wife are two of our favorite people ever, and earlier this summer we drove down to visit them in Philly.  They have a son now, so our weekend trip was a great chance to meet their son as well as hang out with friends.  So what does all of this have to do with Caramel Chai Pound Cake?  Well, the day before we left, I decided we should bring a dessert with us.  No real reason.  I just wanted to bring a dessert.  So I brought a dessert. 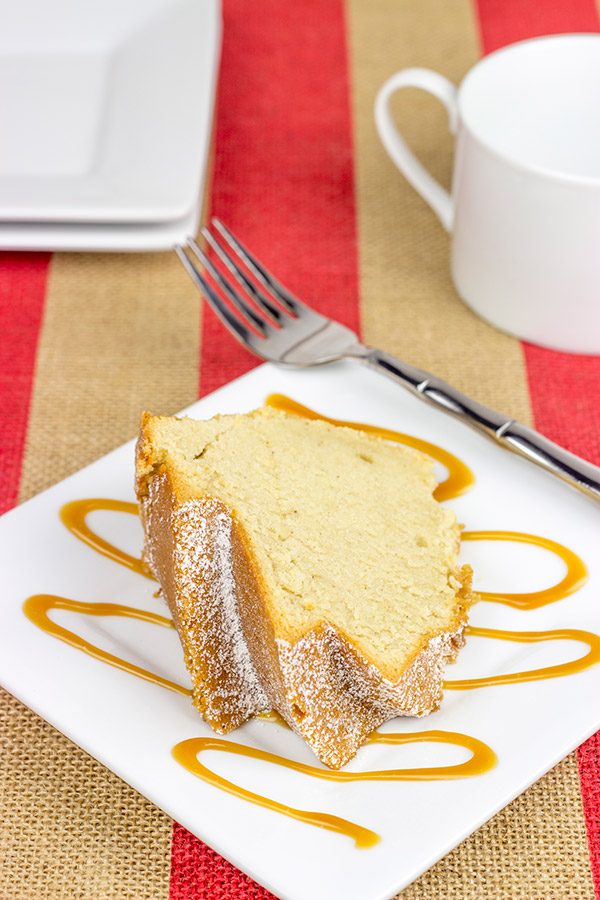 Pound cake has long been a favorite dessert for me.  My mom makes a heck of a delicious pound cake, and it is always one of my favorites whenever I go back to visit.  (Side note: Even though I have her recipe and I follow it exactly…my pound cake is never quite as good as hers.  It’s good.  But it’s not mom’s.  Anyone else know what I mean here?)  For this pound cake, I decided to mix it up a bit.  This summer, we’ve been enjoying International Delight’s Caramel Chai Tea Latte, so I decided to create a pound cake based on these delicious flavors.

In addition to adding the Caramel Chai Tea Latte directly into the batter, I also added some cinnamon, ginger and cardamom.  And of course, the cake needed to be drizzled with caramel after it was baked.  The result was this incredibly tasty Caramel Chai Pound Cake.  We loaded the cake in the car and took it down to Philly with us.  It didn’t last long.  We all snacked on that cake while reminiscing about our days in Atlanta and semi-pro football games.

Have you ever attended a semi-pro football game?  Can you explain a 25-yard penalty to me? 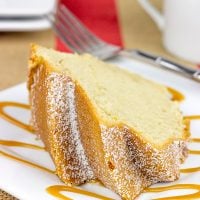 This conversation is sponsored by International Delight. The opinions and text are all mine.