This Butternut Squash and Pumpkin Soup is a tasty (and healthy) way to warm up on chilly Autumn evenings! 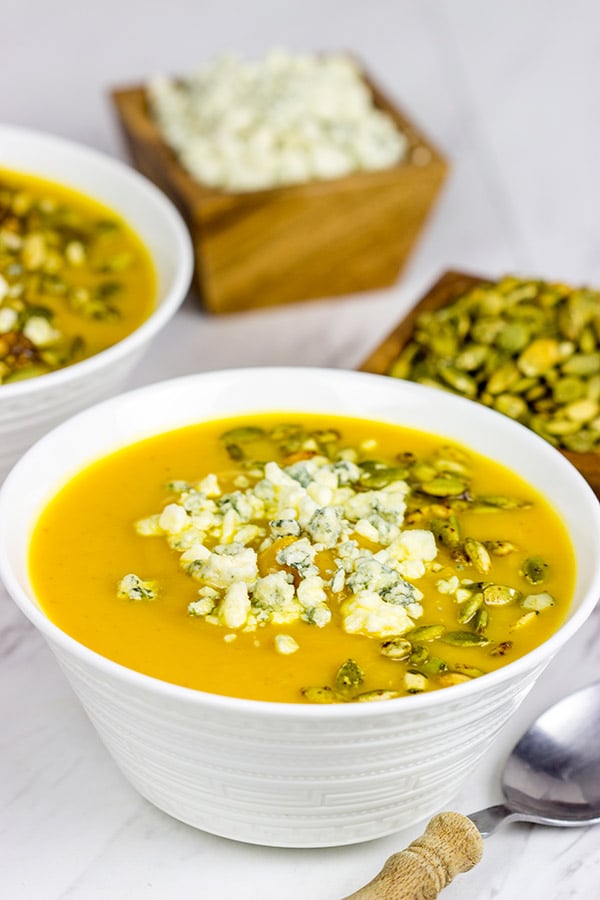 It’s officially soup season.  I’m not exactly sure when soup season actually starts, but it has totally started in our house.  The nights are downright chilly lately, and a good bowl of soup is the perfect dinner!  For this first soup of the Fall, I decided to stick with traditional Fall ingredients.  Nope, I didn’t go pumpkin spice.  We already have enough PSL love going around, so I didn’t need this soup to taste like a dessert.  (Although I did add just a pinch of nutmeg here.  It totally works…trust me!) 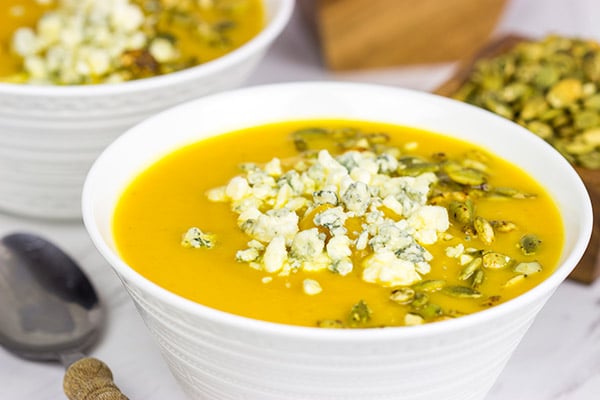 We’ve grown pumpkins in our garden several times over the years.  Last year, we got a couple tiny little pumpkins that I used as part of our Fall decorating.  Truthfully, I’ve always wanted to grow a huge pumpkin though.  Our friend’s father grows gigantic pumpkins in his yard, and the photos look awesome!  But apparently they’re a bit harder to grow than just tossing some seeds into the ground.  Oh well.

Speaking of gigantic pumpkins, did you see that a guy in Rhode Island grew a pumpkin that weighed in at 2,261 pounds last year?  Holy cow.  That’s a lot of pumpkin pie!  And take a look at that pumpkin.  It’s ugly.  That’s not a carving pumpkin at all.  It should only be used to make pumpkin pie.  Lots and lots of pie.  (And for the record, a Belgian man grew the world’s largest pumpkin last year, too.  That one clocked in at 2,624 pounds.  That’s a ton of pumpkin…literally.  In fact, it’s more than a ton.) 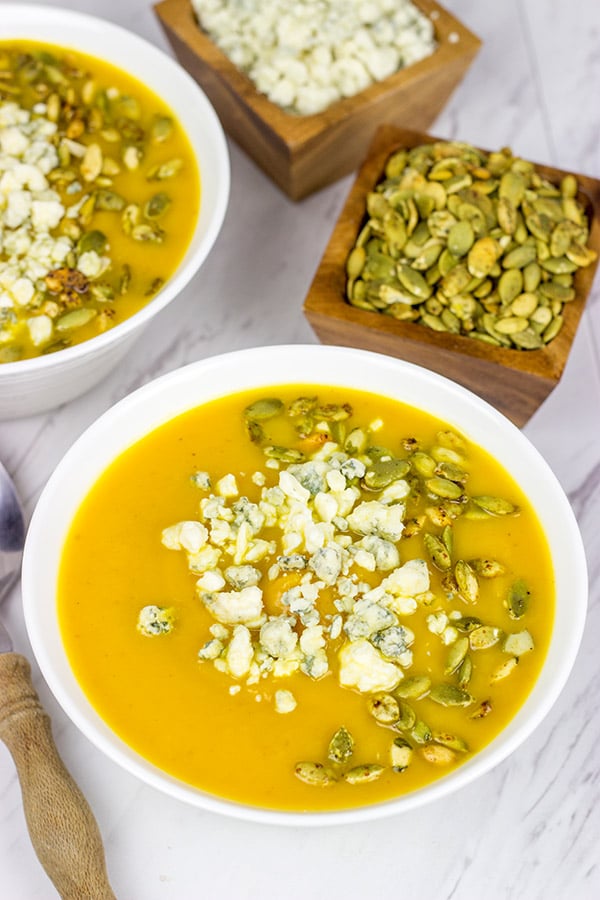 Despite talking about gargantuan pumpkins, I actually cheated with this Butternut Squash and Pumpkin Soup.  Instead of roasting pumpkin, I used a can of pureed pumpkin.  I did roast the butternut squash, though, so I probably could’ve bought some of those little sugar pumpkins and roasted them at the same time…but we happened to have an extra can of pumpkin in the cabinet, so I used that instead.  Either way, the flavor of this Butternut Squash and Pumpkin Soup is out of sight!  Like I kinda wanted to lick my bowl when I was done.  But I’m not a dog, so I refrained.  Instead, I used a spatula to scrape up all the bits…and then I licked the spatula.  Kidding! 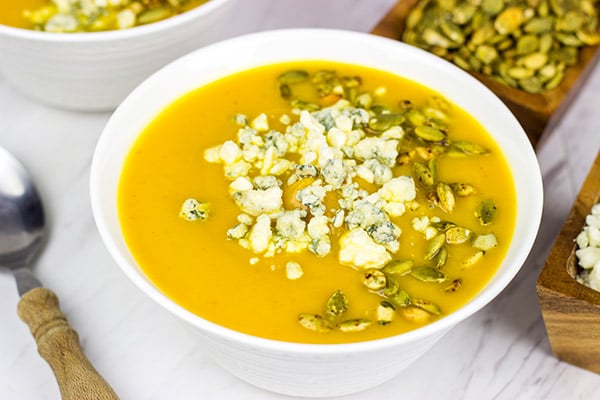 I’ve really gotten into adding fun toppings on soups lately, and I went with toasted pumpkin seeds and crumbled blue cheese for this Butternut Squash and Pumpkin Soup.  The pumpkin seeds are kind of an obvious choice, and the extra bit of crunch adds a fun texture to each bite.  (Tip: Add the toasted seeds right before serving this soup.  If they sit in the soup too long, they’ll turn soft.)  But the blue cheese is a bit different.  I admit it.  Laura went to reheat this soup for dinner, and I reached in and pulled the blue cheese from the fridge.  She was thoroughly confused.  I told her to trust me on this one. 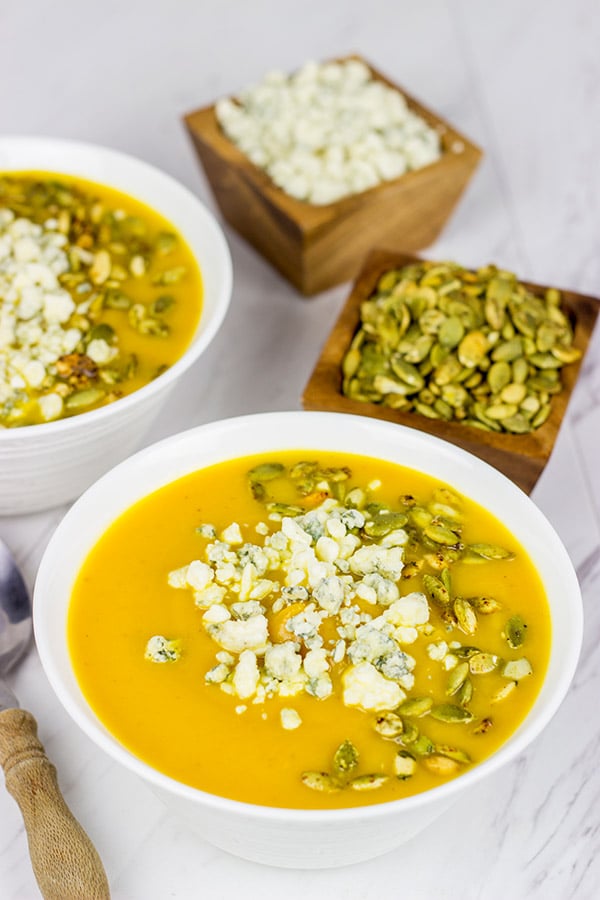 As she dipped her spoon in for the first bite, she once again reminded me that blue cheese is a strange addition.  Then she took that bite.  Then she admitted that the blue cheese totally works with butternut squash and pumpkin.  Give it a shot and see what you think!  This Butternut Squash and Pumpkin Soup was rather easy to make, too.  My mother, sister and niece are planning a visit up here in a couple of weeks, and I’m thinking I’ll have a big pot of this soup simmering on the stove when they arrive.  Enjoy this soup, my friends.  And enjoy this Fall weather, too! 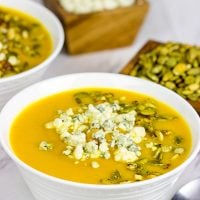 For the Spiced Pumpkin Seeds