Say hello to morning with a big slice of this tasty Banana Walnut Coffee Cake! 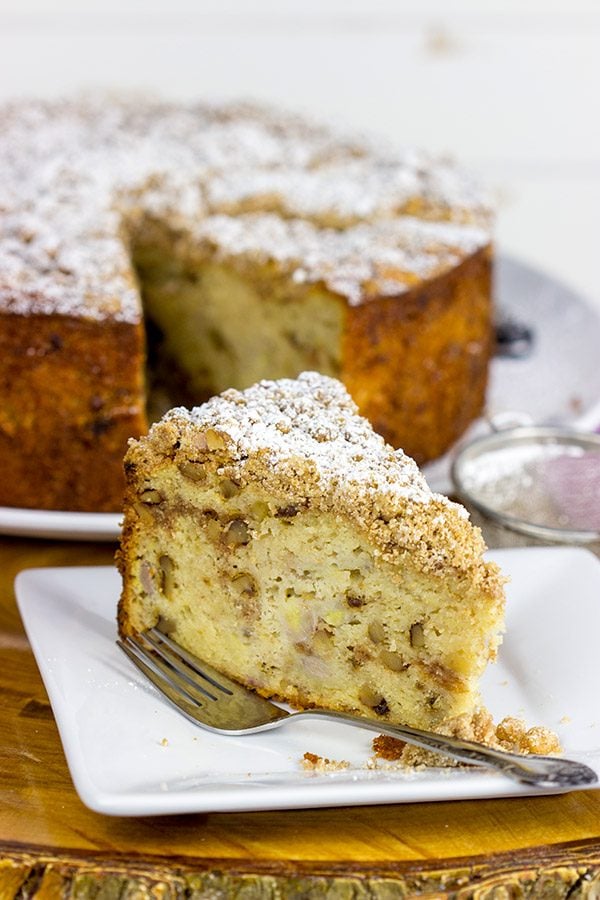 I’m a morning person.  I always have been.  Back when I was a little kid, I’d wake up at 5:30am.  I couldn’t go back to sleep, so I’d get up and read comic books.  (And eat powdered sugar doughnuts.)  To be fair, I guess there was that spell in college when I didn’t wake up early.  Since when is a 9:10am class too early!?

Even now, I’m an early riser.  And I see this pattern repeating itself in Robbie.  But that’s ok.  We’ll just go downstairs, brew a cup of coffee (for Dad) and some milk (for Robbie) and eat a slice of Banana Walnut Coffee Cake.  There may or may not be cartoons involved.  And not those new-aged cartoons where everyone gets a trophy.  I’m talking Tom & Jerry and Wile E. Coyote.  Nothing beats an anvil materializing out of thin air and squishing the bad guy.  (Although to be fair, I’ve always loved Wile E.  And I still pull for him to get that darned Road Runner.)  Thank goodness for the Boomerang network at 5:30am. 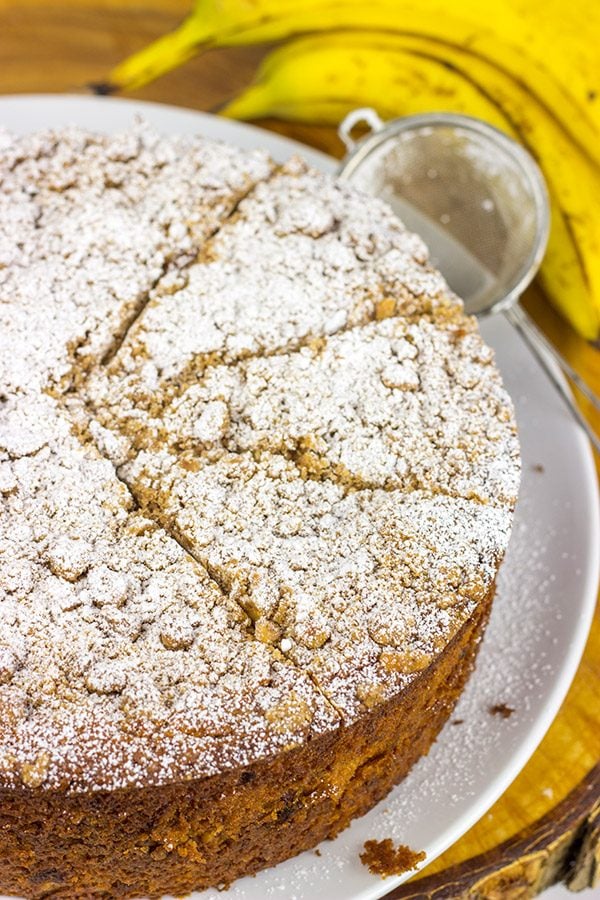 So Robbie has been on a serious banana kick lately.  In fact, I’d count banana among his first 5 words.  (And by banana, I mean him saying “nanana.”  But he does point at the bananas on the counter when he says it.)  We cut them into little pieces for him, and he initially struggled with the slimy texture.  But then he got over it, and now he’s a banana-eating machine. 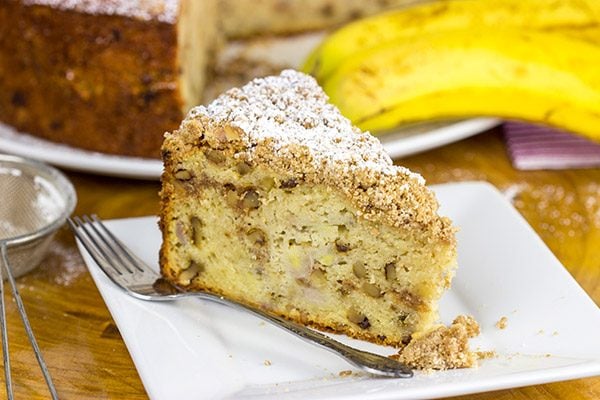 For me, banana bread was a staple growing up.  My Mom always had a bunch of bananas on the counter ripening until they were well past a normal banana.  But those are the best for baking!  So this past week, I wondered what would happen if I merged my mom’s banana bread recipe with my coffee cake recipe.  The result was this Banana Walnut Coffee Cake.  And it was nothing short of amazing! 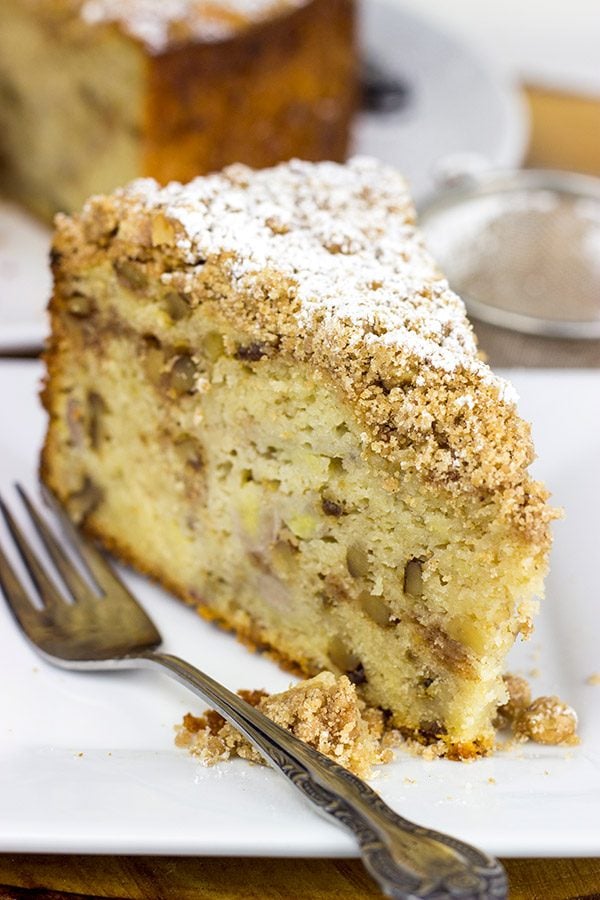 Even Laura (who readily admits that she doesn’t like breakfast food) was all about this Banana Walnut Coffee Cake.  She’d sit on the floor with a slice, and Robbie would come over and try to pick up the crumbs off of her plate.  The fact that this cake had a strong banana flavor only encouraged the little guy even more!  We made sure Robbie ate a wholesome breakfast, but we did let him nibble on some of the crumbs from this cake. 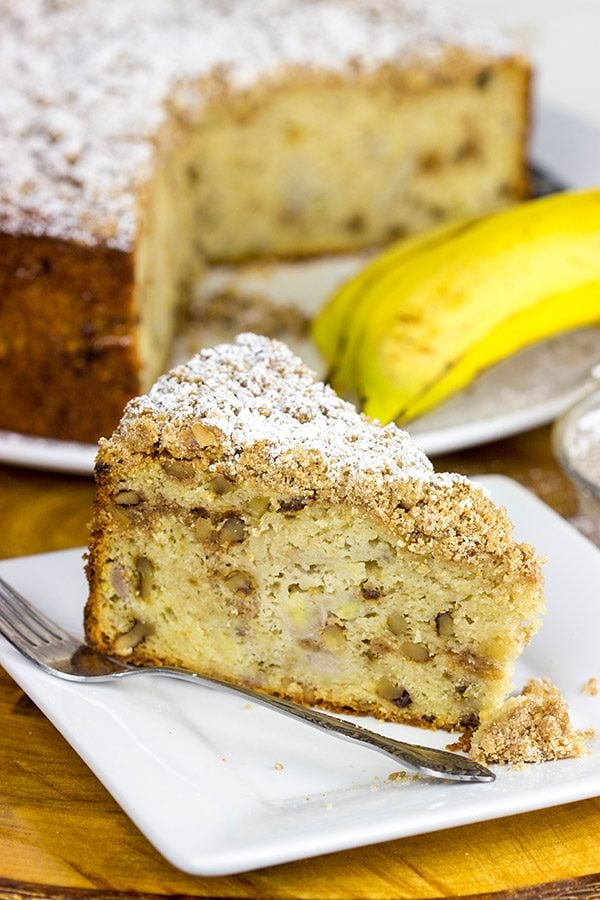 If you like banana bread, then you owe it to yourself to try this Banana Walnut Coffee Cake!  It’s the kind of cake that can be served for breakfast along with a steaming mug of coffee.  Or you can pull this one out for dessert…again with a steaming mug of coffee.  We may or may not have served it for both breakfast and dessert.  Laura opted to have hers in the morning.  I opted to have mine at night.  No matter when you prefer your coffee cake, I hope you enjoy this one!  It’s good.  Like really good!

For the streusel:
For the Cake:

For the Streusel
For the Cake