Serve up this Truffle and Herb Ricotta Cheesecake as a fun and unique centerpiece to your holiday cheese tray! 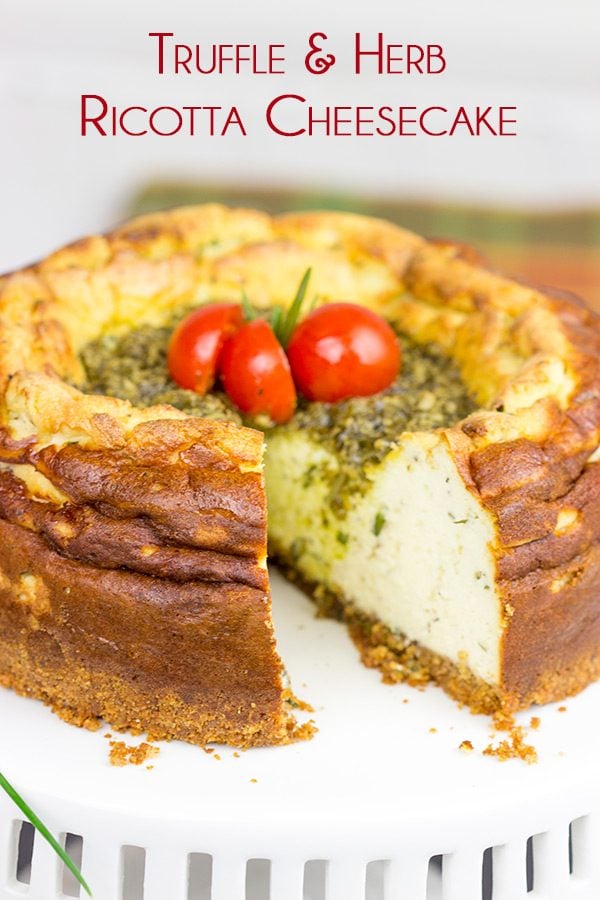 Cheesecake is one of my all-time favorite desserts.  Seriously.  If you put a line-up of desserts in front of me (aka Thanksgiving afternoon), then I will always go to the cheesecake.  But cheesecake doesn’t always have to be dessert.  Sometimes it can be breakfast.  Haha…I’m totally kidding (sorta)!

Ditch the sugar and replace it with Parmesan cheese.  Save the cream cheese for the bagels and use ricotta instead.  And no chocolate, caramel or brownie bites required for this recipe.  Nope, go with pesto, herbs and truffle oil.  Savory cheesecakes are totally a real thing…and they’re delicious! 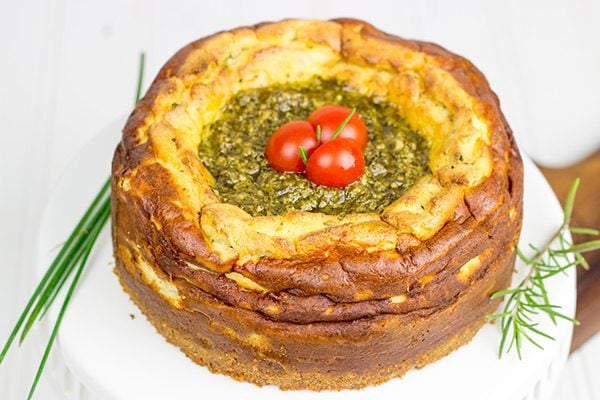 With the holidays quickly approaching, it’s always good to have a fun and unique appetizer up your sleeve when you have the neighbors over for cocktails.  We’ve been known to put together a big cheese tray with various soft and hard styles of cheese.  But now we have a fun new addition to our cheese tray repertoire.  Yup, that’s right…a cheesecake.  More specifically, a Truffle and Herb Ricotta Cheesecake!

What are your plans for Thanksgiving this year?  We’ll have a brand, spanking new little addition to our family, so the in-laws have made the trek up to upstate New York this year.  They’ve assured us that they will do all of the cooking, cleaning and diaper changes.  Ok, so maybe I added the part about the diaper changes…wishful thinking, right? 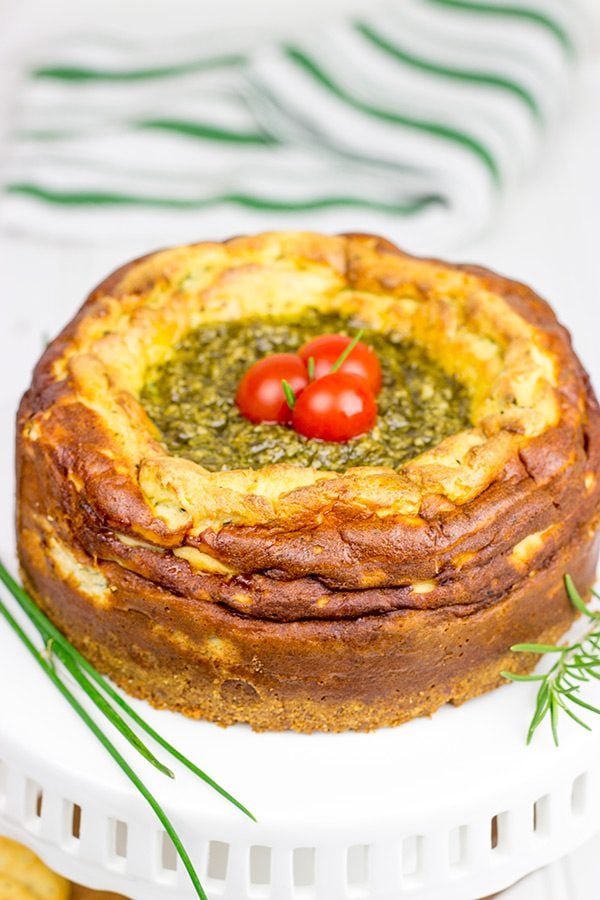 Since our families will be tasked with preparing the Thanksgiving meal, I figured the least I could do is have a tasty appetizer waiting for them when they land and/or get off the road.  My wife and I actually prefer this Truffle and Herb Ricotta Cheesecake chilled, but it can totally be served warmed or at room temperature, too.  But since we like it better cold, that means I can have this bad boy baked in advance and then hanging out in the fridge until the party begins.  Did I say party?  I meant diaper-changing marathon. 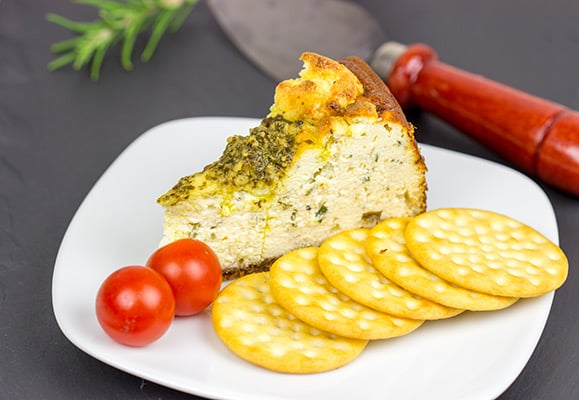 In addition to adding a layer of pesto on top of this cheesecake, I also tossed a hearty amount of chopped herbs into the batter.  Look at that delicious slice of cheese!  Might I suggest creating a tasty cheese tray as an appetizer for Thanksgiving this year?  This Truffle and Herb Ricotta Cheesecake makes for a great centerpiece.  Put this cheesecake right in the center and spread a variety of crackers, bread, olives and cheeses around the rest of the tray. 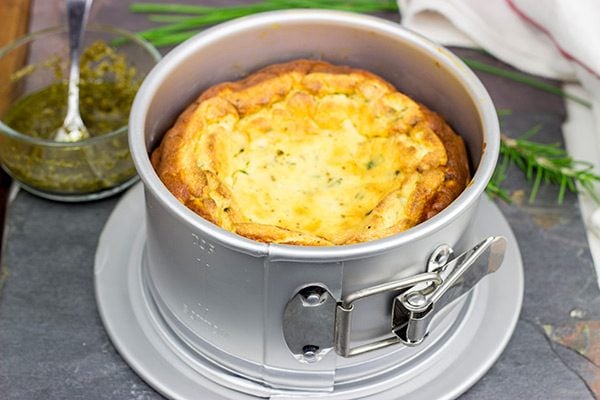 I’m a big fan of Fat Daddio’s bakeware.  Truth be told, their springform pans were the reason why this bakeware first caught me eye.  Several years ago, I worked part-time in a retail kitchenware store, and Fat Daddio’s was one of the featured lines of bakeware.  I learned how their anodized aluminum pans heated faster and cooled quicker than other pans.  Awesome!  But the design of their springform pans is what totally caught my attention.

Fat Daddio’s springform pans feature a wide-pedestal base design.  Not only does that make it easier to handle the pan as it goes in and out of the oven, but the pedestal itself can double as a cake stand.  Yes, this cheesecake pan doubles as a cake stand, too!  And I find that clamping the top portion of the pan onto the base is incredibly easy thanks to the over-sized steel buckle. 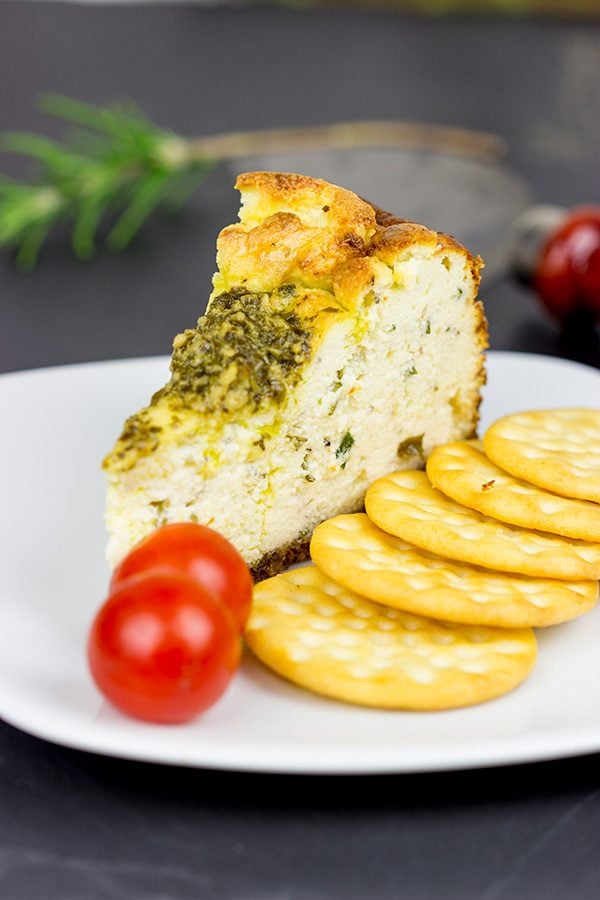 If new bakeware is on your Christmas list this year, I suggest checking out Fat Daddio’s full line.  I have quite a few of their pans, and I’m continually impressed with their quality.  You can find Fat Daddio’s bakeware in specialty kitchenware stores or online at Amazon.

Have you ever made a savory cheesecake?

For the Crust
For the Cheesecake

For the Crust
For the Cheesecake

We prefer to serve this cheesecake cold. If serving chilled, wait to add pesto and cherry tomatoes until just before serving.