Featuring chopped Butterfinger bars both in and on top, this frozen No Bake Butterfinger Pie is a tasty dessert for a hot summer day! 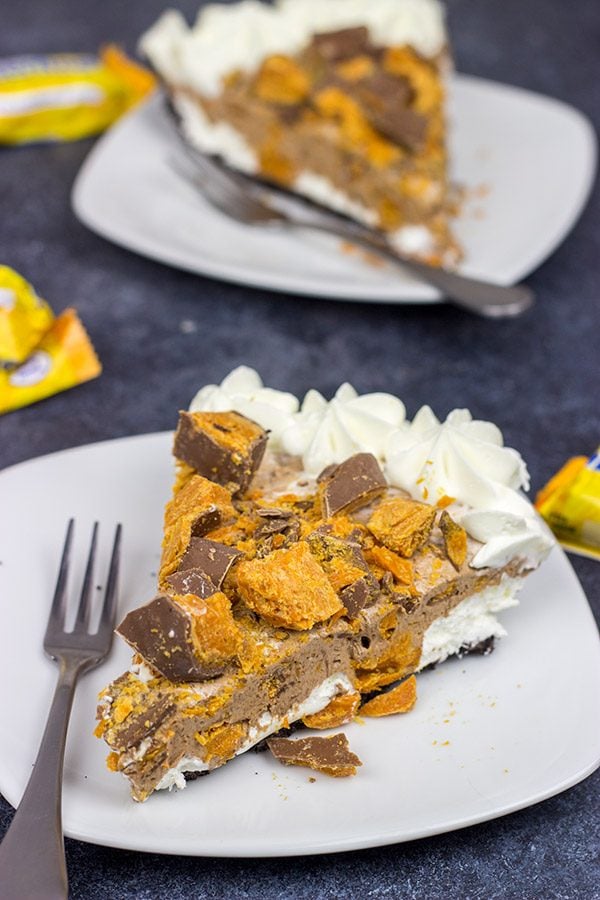 As much as I love hitting the kitchen and experimenting with a whole new recipe, sometimes it’s just nice to go back to an old favorite.  That’s how this No Bake Butterfinger Pie came into being.  It’s an old favorite.  Well, to be fair, its cousin (the No Bake Chocolate Almond Pie) is the old favorite.  My mother introduced me to that pie a couple of years ago when we were down in Nashville visiting.  It gets hot (hot! hot!) in Nashville during July, and that pie was a huge hit.  It uses melted Almond Hershey bars in the pie, and so I started wondering if I could use other candy bars instead.  The answer is yes! 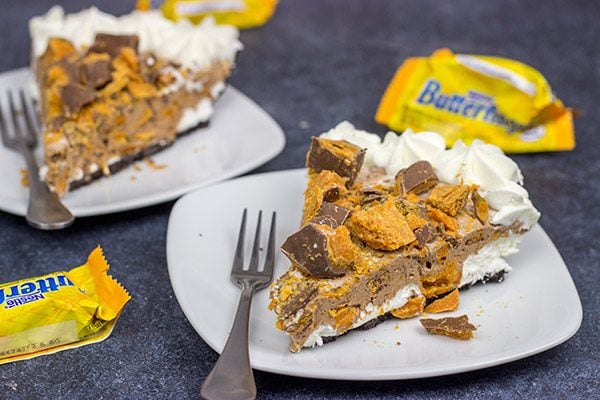 Did you grow up seeing commercials of Bart Simpson talking about Butterfingers?  I did.  I still vividly remember those television ads, too.  “Nobody better lay a finger on my Butterfinger!”  But did you know that those commercials actually aired a year before The Simpsons show actually began?  It’s true!  Back then, the Simpsons were just animated clips on The Tracey Ullman Show. 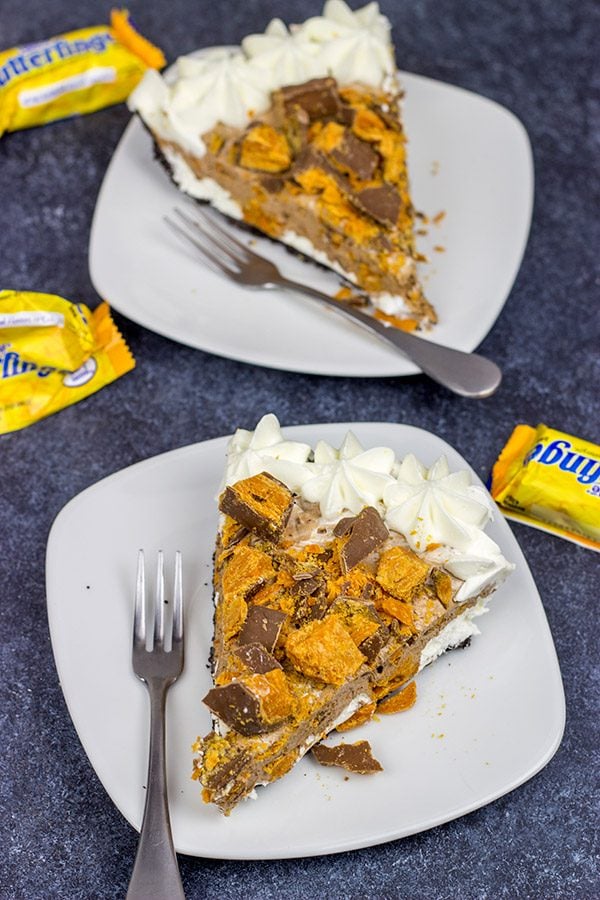 As a child of the 80’s, I remember Bart Simpson being everywhere.  From the tv ads for Butterfinger to lunchboxes to old NES games.  My sister gave me a Nintendo Retrobit console for my birthday a couple of years ago, and I totally went back and played The Simpsons: Bart vs. the Space Mutants.  In fact, that game included floating candy bars, and I suspect they were probably meant to be Butterfinger bars.  Maybe the graphics weren’t good enough back then to actually add the name Butterfinger?  Either way, there is a permanent association in my brain between Bart and Butterfingers.  Also, that game was really hard…and (contrary to popular belief) getting older doesn’t make you better at video games.

One more Simpsons trivia tidbit, and then we’ll turn back to this No Bake Butterfinger Pie.  I promise!  Did you know that Milhouse van Houten (Bart’s gullible and nerdy friend) actually made his first appearance in a Butterfinger commercial?  It’s true!  Now Milhouse is a permanent staple in the Simpsons cast of characters, but he got his start thanks to Butterfinger.

Also, while we’re on the throwback topic, can we just talk about this old Butterfinger ad for a minute?  The candy bar was invented in the 1920’s by the Curtiss Candy Company in Chicago, Illinois…and this was one of their first print ads.  Uh, enriched with dextrose? 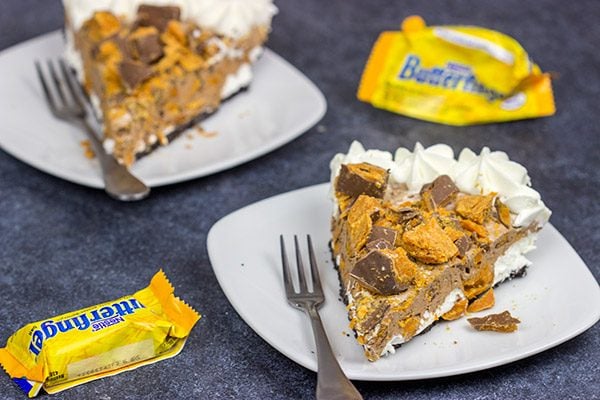 Ok, let’s fast forward to present times and this No Bake Butterfinger Pie.  As I mentioned above, this idea came about thanks to one of our favorite summer desserts.  I still melted Hershey’s bars to create the chocolate filling, but I also folder chopped Butterfinger bars in as well.  I guess this pie could be called a No Bake Candy Bar Pie, but I like using the Butterfinger name in there.  Plus, that lets me keep experimenting with other candy bars in the future.  No Bake Milky Way Pie?  No Bake Snickers Pie?  No Bake Kit-Kat Pie?  I think I’ve got my work cut out for me!

I like to serve this pie frozen.  Not only does freezing the pie make it more refreshing on a hot summer day, but it also makes it easier to slice.  I hope you enjoy this No Bake Butterfinger Pie as much as we did!  Cheers, friends!

Did you make this No Bake Butterfinger Pie at home?  Leave a comment.  Or snap a photo and tag me on Instagram (@Spicedblog).  Happy (no) baking!

Looking for other tasty no bake treats?  Check out these other favorite no bake recipes, too: 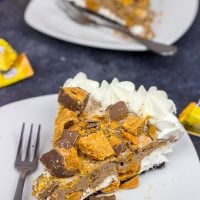