Up your gravy game…by adding mushrooms!  This Mushroom Gravy is a fun way to add a new flavor to an old favorite!

As a kid, you wouldn’t have caught me anywhere near mushroom gravy.  Heck, even as a younger adult, I wouldn’t have ventured anywhere near mushroom gravy.  Growing up, I wouldn’t touch gravy.  I’m not sure why.  Perhaps it just looked strange.  Either way, you would never find gravy on my plate.   And mushrooms?  Yeah, right!  (I actually always liked the earthy flavor of mushrooms – I just couldn’t get past the texture.) 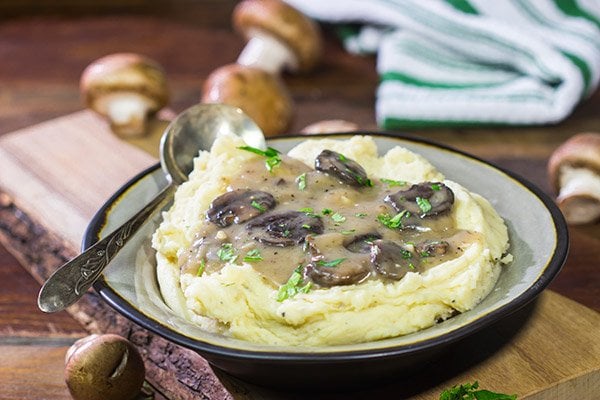 I have to chuckle a bit as I write this because I have nightly discussions with my 5-year-old son about trying new foods.  Robbie likes about 4 things, but that’s mainly because he won’t try new foods.  I guess the apple doesn’t fall far from the tree, though – he wouldn’t touch this mushroom gravy when I offered it to him.

Fast forward some number of years, and I’m all in on this Mushroom Gravy!  My aversion to gravy actually came to a sudden halt when I tried poutine for the first time.  Sometimes called the national dish of Canada, poutine is french fries covered with gravy and topped with cheese curds.  It’s amazing.  (Check out this Pulled Pork Poutine for a fun twist on the classic poutine recipe.)  One bite of poutine, and suddenly gravy was my new best friend! 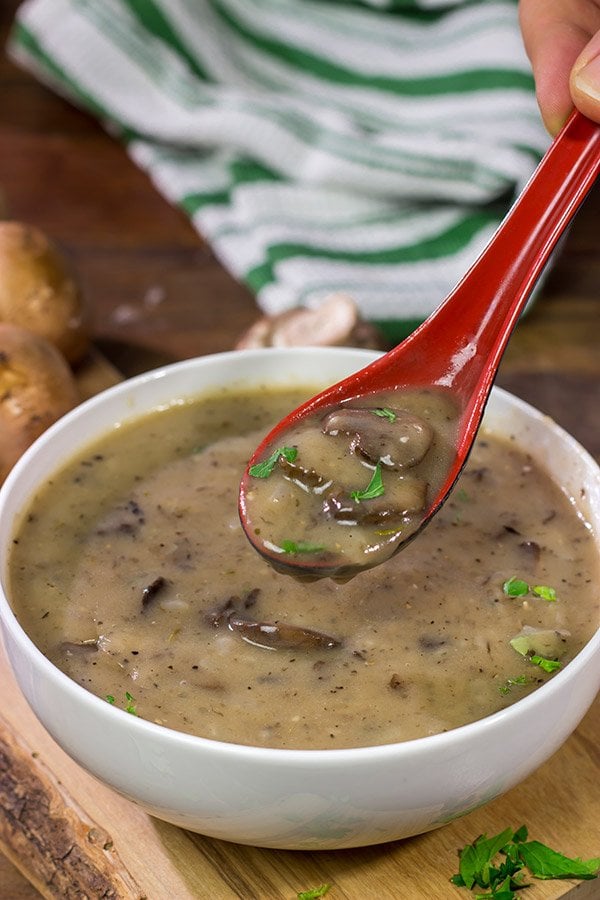 Over the years, I’ve gotten over my aversion to the texture of mushrooms.  And when combined with gravy?  It’s a match made in heaven!  The hearty flavors in this gravy pair so well with creamy mashed potatoes – I served it with a batch of Slow Cooker Mashed Potatoes.  Actually, come to think of it, I bet this Mushroom Gravy would be amazing in poutine.  I mean everything is better when you add french fries and cheese curds, right? 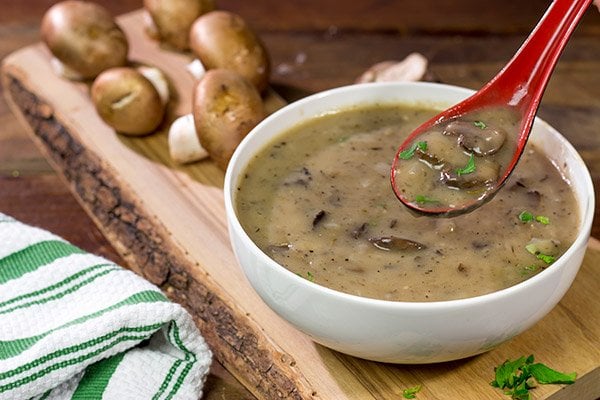 I know gravy gets a bad rap as it can end up lumpy and flavorless.  Not this Mushroom Gravy!  The key to this gravy is whisking the cornstarch together with the water before adding it to the pot.  If you add the cornstarch by itself, it tends to clump together, and you end up with lumpy gravy.  I find that making a cornstarch slurry is an easy way to avoid lumpy gravy. 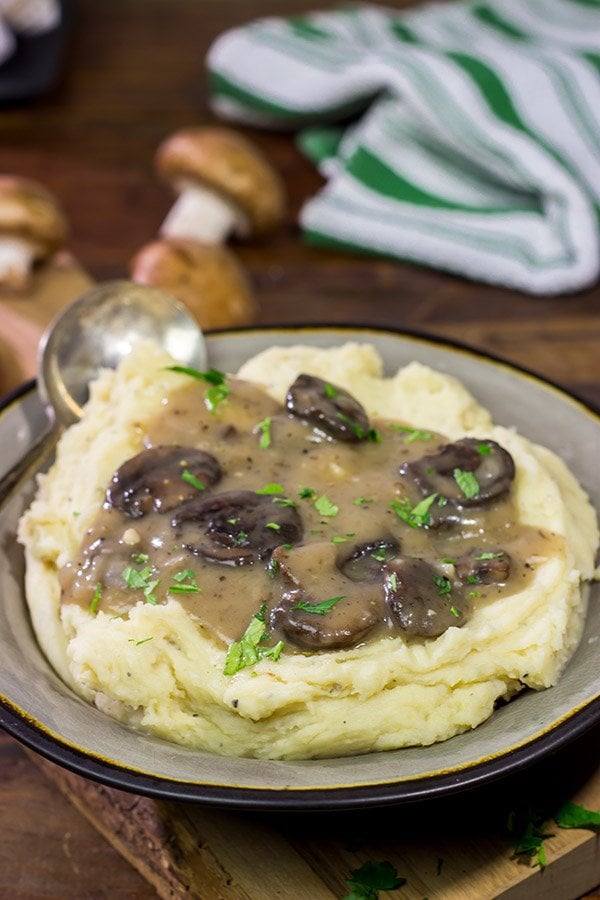 As we head into the holiday season, keep this Mushroom Gravy in mind!  It’s a relatively simple recipe, and it’s sure to catch people’s attention when you set it on the table.  I hope you enjoy this recipe as much as we do here.  Cheers!

Did you make this Mushroom Gravy at home?  Leave a comment, or snap a photo and tag me on Instagram (@Spicedblog).  I’d love to see your version – especially if you used it to make poutine! 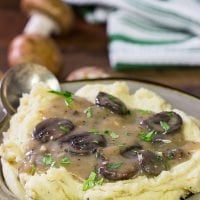 Looking for other tasty recipes?  Check out these other favorites, too: 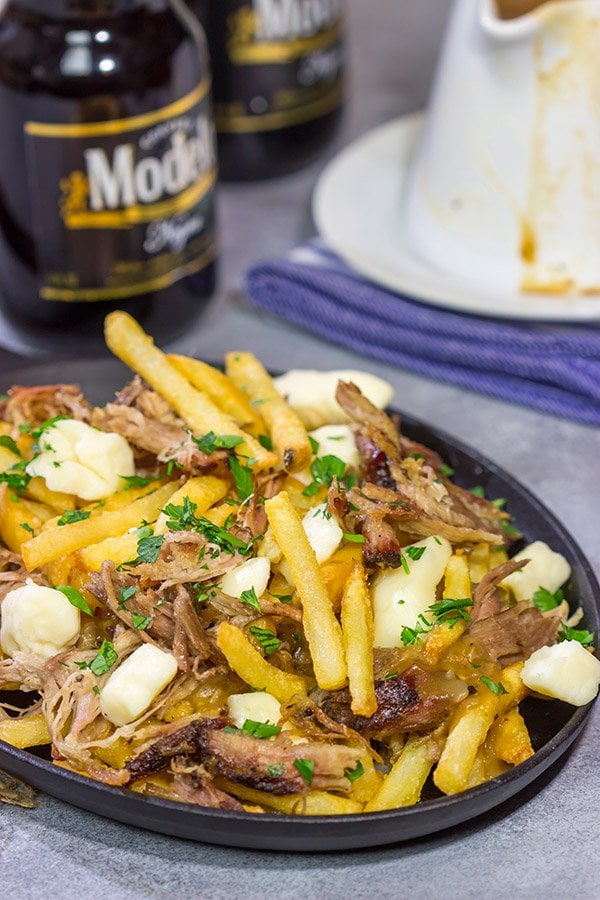 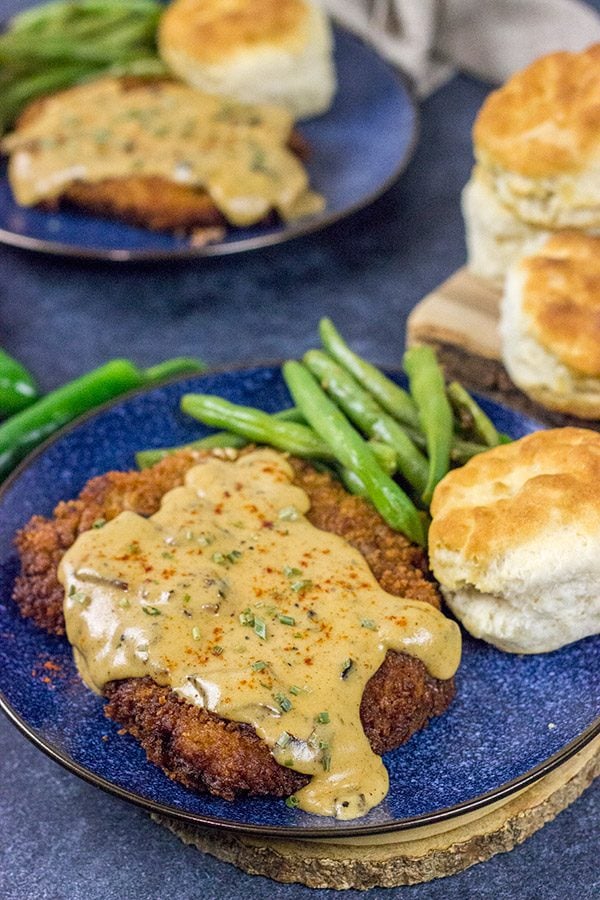 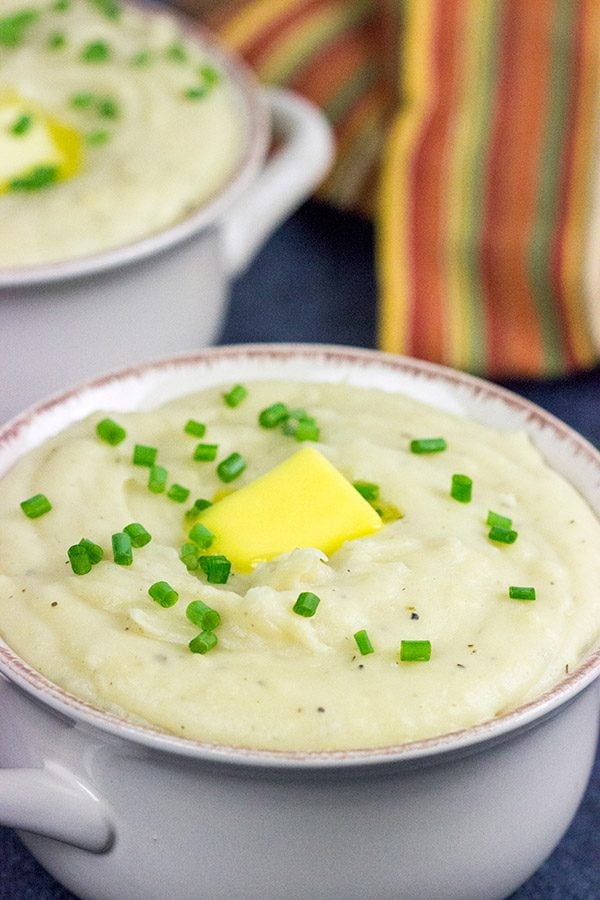