Topped with a festive champagne buttercream,
these Mimosa Cupcakes are an excellent way to ring in the new year! 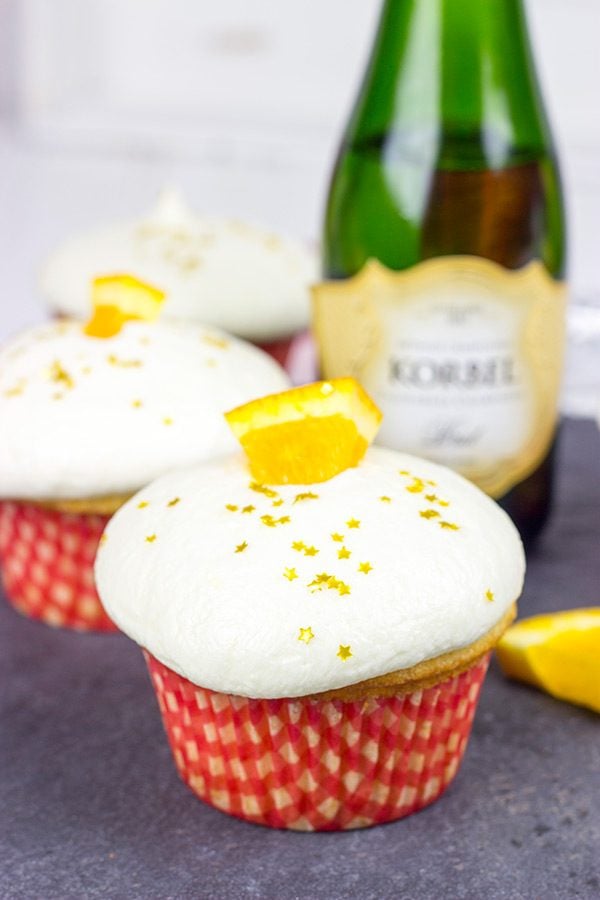 To steal one of my wife’s favorite sayings, “I’ll have a mimosa, hold the orange juice.”  Since mimosas are comprised of only orange juice and champagne…yeah, you get the point.

Do you guys ever bust out a bottle of champagne to celebrate something fun?  Maybe it was a promotion at work…or maybe you won the lottery…or maybe it’s a day ending in “y”.  No matter the reason, it’s always fun to pop the cork on a bottle of the bubbly and celebrate in style! 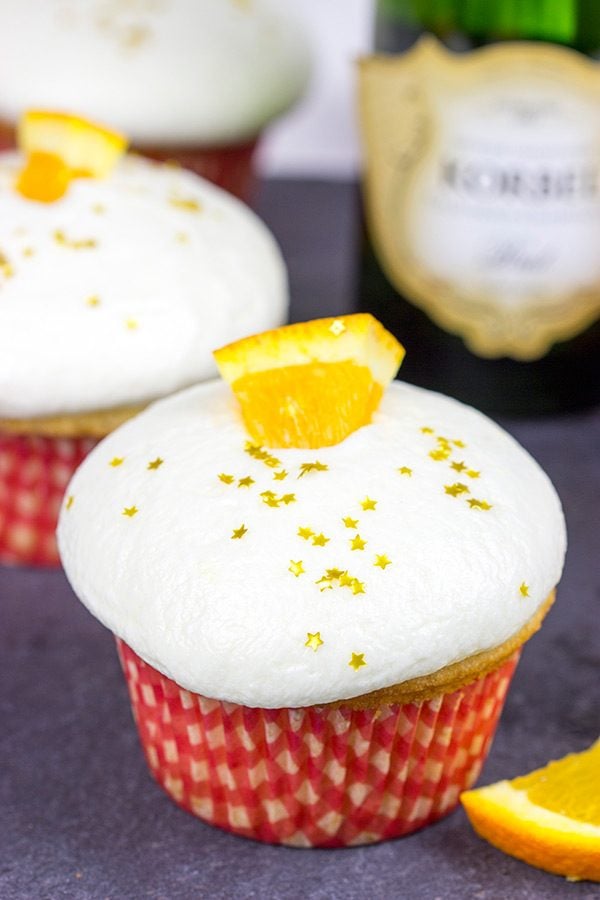 We keep it pretty low-key around here on the NYE.  We make pizza and open a bottle of champagne.  We make a batch of tater-tots as an appetizer…because why not?  It’s New Year’s Eve, and that’s a good enough reason to eat some tots, right? 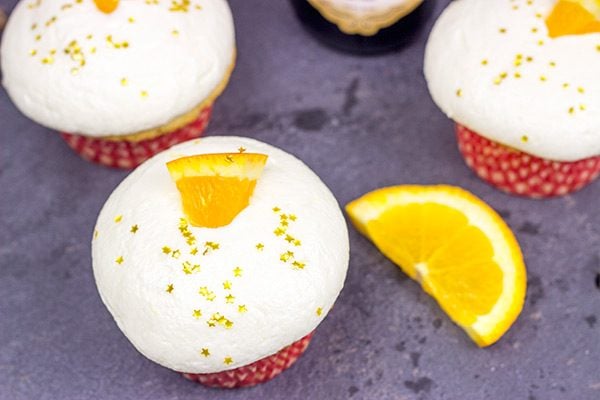 Am I the only one who finds New Year’s Eve a bit depressing?  I mean I enjoy celebrating just as much as the next guy.  I enjoy blowing those silly paper horns and wearing sunglasses that spell out 2016.  But New Year’s Eve also signals the end of the holiday season.  It means back to reality.  No more indulging in tasty desserts.  No more sitting up late visiting with family and friends.  But New Year’s falls on a Friday this year, and that means our holiday vacation gets extended by an extra weekend.  So I vote that we celebrate and make the most of these extra days.  (Plus, there’s some really good college football games on NYE this year.  Pizza, champagne and college football is the lineup of champions!) 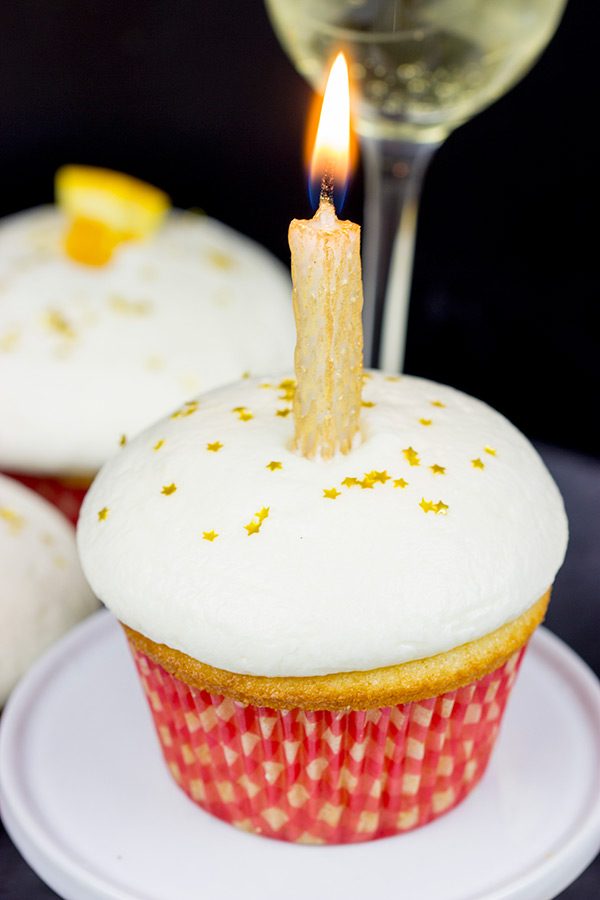 What better way to celebrate than with some Mimosa Cupcakes?  These cupcakes include a bit of orange juice, and then they’re topped with champagne buttercream.  My wife sampled the champagne buttercream while I was frosting these cupcakes…and I had to literally wrestle it away from her.  Ok, maybe not literally.  But I did have to tell her kindly to step away from the frosting.  She complied, but only after I promised that she could have a cupcake for dessert.

Oh, and if champagne isn’t your thing (or you want to serve these Mimosa Cupcakes to the kiddos), then just make the frosting with ginger ale instead of champagne.  They’ll still taste delicious.  #PinkySwear 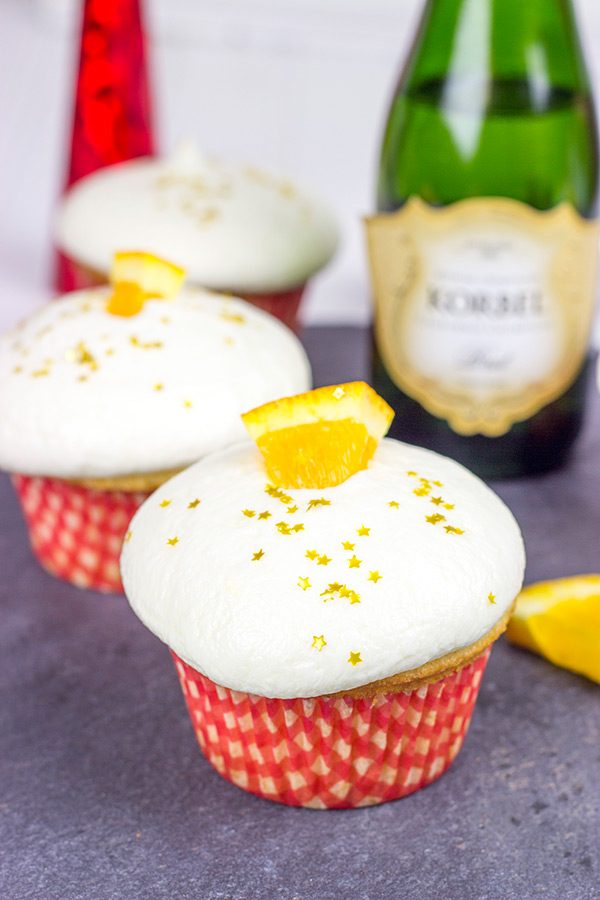 How do you celebrate New Year’s Eve?

What would you do for a Mimosa Cupcake right now? 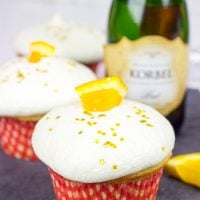 For the Champagne Frosting

For the Champagne Frosting