The Lady Baltimore Cake is a unique cake. It calls for two different “frostings,” neither of which are a traditional frosting like you might think. It also calls for raisins…soaked in sherry! This cake is a classic dessert in the American South – and if you enjoy baking (and I suspect you probably do since this is a recipe blog), it’s definitely worth putting this cake on your list of things to bake.

According to folklore, the Lady Baltimore Cake was created after Owen Wister, a novelist who lived in the late 1800’s and early 1900’s, chose Charleston, SC as the setting for one of his novels.

In his book, Lady Baltimore, the main character mentioned a cake that she named the Lady Baltimore Cake. She described the cake, but of course there was no actual recipe.

I should like a slice, if you please, of Lady Baltimore,” I said with extreme formality.  I returned to the table and she brought me the cake, and I had my first felicitous meeting with Lady Baltimore.  Oh, my goodness! Did you ever taste it?  It’s all soft, and it’s in layers, and it has nuts – but I can’t write any more about it; my mouth waters too much.  Delighted surprise caused me once more to speak aloud, and with my mouth full, “But, dear me, this is delicious!

from Lady Baltimore by Owen Wister, 1906

So that description gives a rough idea of the cake, but there are very few specifics. Like many iconic recipes, there is no way of knowing where the actual recipe for this cake comes from. Versions of this cake began appearing in newspapers all over the country by late 1906.

However, the most widely accepted version of this cake was likely created by the owners of Charleston’s Lady Baltimore Tea Room. (The Tea Room predated Wister’s book. He supposedly visited the tea room on a trip to Charleston, and that’s where he got the name for his book. Who knows if this is true – but it sounds plausible.)

This version of the Lady Baltimore Cake comes from Mrs. Whaley’s Charleston Kitchen, a local Charleston cookbook which was first published back in 1999. According to Mrs. Whaley, the recipe that she included in her book came from a family friend. She swore she would not reveal the recipe as long as she lived. However, after the family friend passed away, Mrs. Whaley got permission from her friend’s granddaughter to share the recipe.

If we are willing to ignore the murky history of where this cake comes from, then we can focus on how delicious this cake actually is! As noted above, it’s unique. It features 2 layers of firm white cake. It includes 2 frostings – neither of which is a traditional frosting. And it includes toasted walnuts and raisins soaked in sherry.

I grew up in Charleston, SC, and I have vague memories of the Lady Baltimore Cake showing up for special occasions. After all, this cake is a labor of love. But it’s a labor I’m willing to make!

One of the “frostings” for this cake is actually more of a thin sugar syrup that gets drizzled over the cakes while they are cooling. The cakes soak up much of the syrup, and as a result you get a super soft, super tender white cake. I could have eaten that cake by itself – no need for more frosting, nuts or fruit. Just hand me the cake!

The other frosting for this cake is actually a variation of the classic “7-minute frosting.” This is a boiled frosting that hardens up once it sets. I was a bit unsure how this frosting would work on this style of cake – but it was fantastic! Seriously.

And lastly, the sherry-soaked raisins. I’m not a huge fan of sherry in general (I’m more of a bourbon guy), but I have to say that the raisins brought a unique and tasty layer of flavor to this cake. Next time, I might soak the raisins in bourbon…but that’s just me!

I hope you get a chance to make this cake sometime soon. As noted above, it’s a bit of a process to make this cake. In the American South, this cake is typically seen at weddings, birthdays and holidays like Easter, Thanksgiving or Christmas. I say this cake is appropriate for any day of the year! Happy baking!

Did you make this Lady Baltimore Cake at home? Leave a comment, or snap a photo and tag me on Instagram (@Spicedblog). I’d love to see your version! 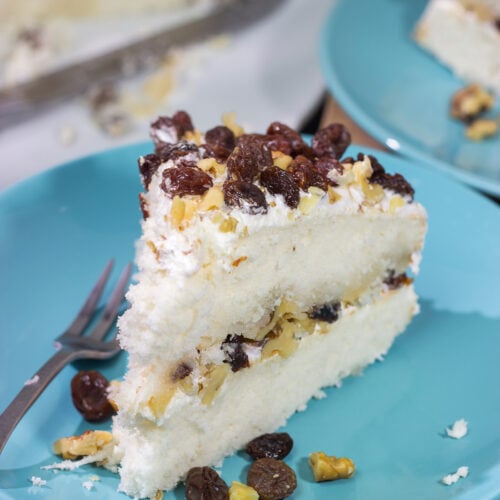 For the Soft Icing

For the Hard Icing

For the Soft Icing

For the Hard Icing

Looking for more tasty cake recipes? Check out these other favorites, too: