Stuffed with quinoa, brown rice and Italian sausage, these Italian Stuffed Peppers are a tasty and filling winter meal! 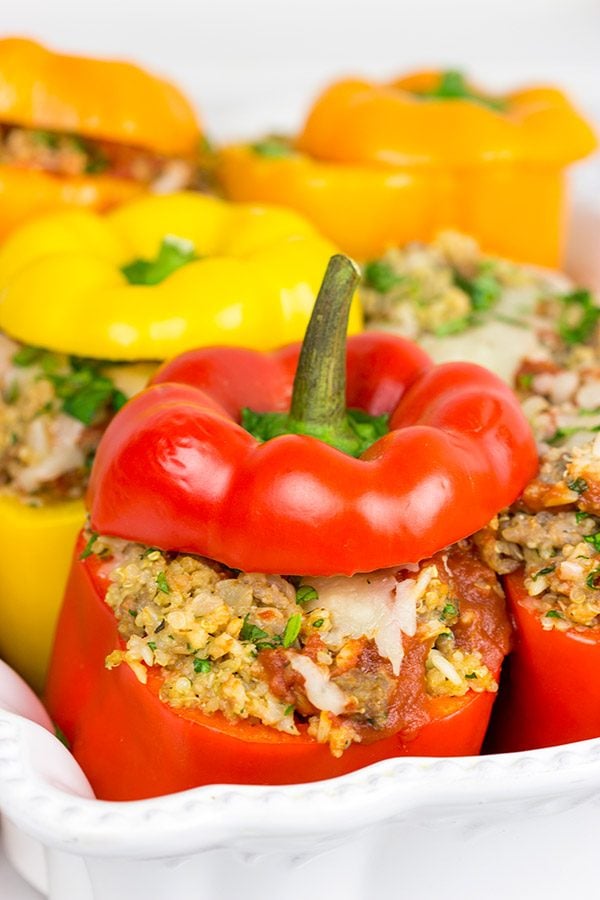 “You’ve got to wait until the sky is totally grey.  All one color.  And you can’t see any clouds.  That’s when it’s likely to snow.”  I remember my mother telling me this when I was a kid…and I subsequently remember staring out of the window for hours waiting for that solid, dull-grey sky.  Growing up in the south, snow was rare.  In fact, I’d guess that we saw snow only once or twice during our years Charleston.  We later moved to Raleigh, NC, and while snow was more common there, it was still rare.  Snow was still an “OMG!  It’s snowing!” type of event. 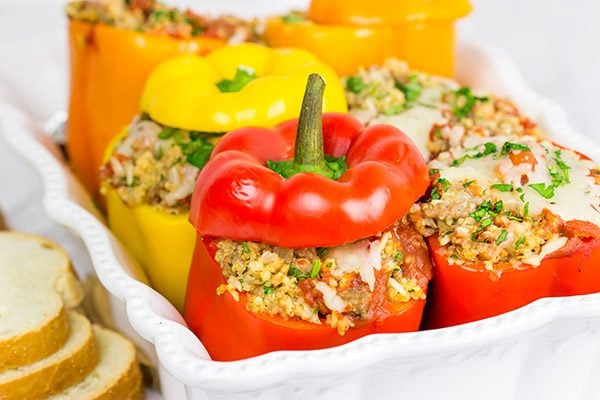 Back then, snow meant snow days.  Snow meant an unexpected day off of school.  Snow meant fun!  We’d build snowmen, have snowball fights, make snow “ice cream”.  It was a regular old party!  Now that we live up here in upstate New York, snow is fairly common.  Correct that.  Snow is very common.  In the last week alone, we’ve had 2 large snow storms.  One led to Robbie’s daycare closing for the day and the other led to a 2-hour delay.  Both led me to snowblowing and shoveling the driveway in the bitter cold. 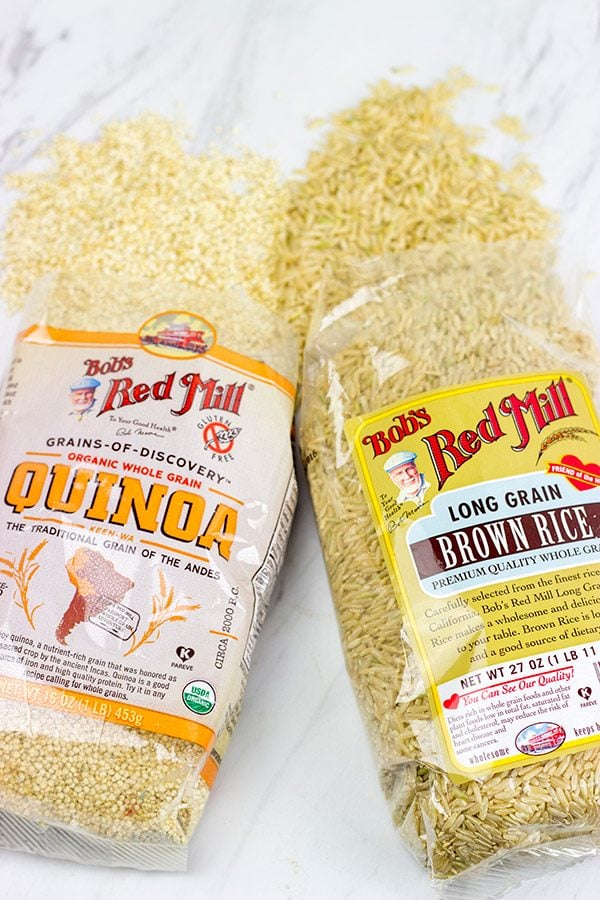 Over the weekend, we decided to have some good old-fashioned fun with the snow.  Sunday was a snowy day, so we pulled out our sled and laid Robbie right down on top.  Of course, we put him in his hand-me-down snow suit, and he looked a bit like a cartoon character.  But at least he was warm and dry!  So off we went pulling the sled behind us down the street.  At first, we thought Robbie would complain or perhaps try to get off the sled.  Nope.  He loved it!  In fact, at one point, I was trotting along at a nice little clip while Robbie laid on the sled yelling “Go!  Go!”  So Dad went and went.  And then Dad came in and took a nap on the couch.  (Hey, running through snow is hard work!  How did I do that when I was a kid?!) 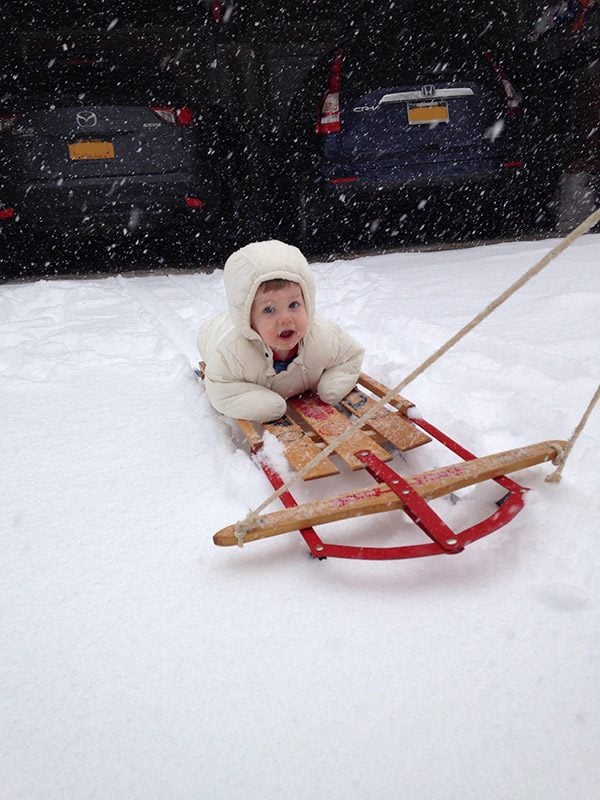 Once we recovered from the sledding adventure, I hopped into the kitchen to make dinner.  I had a general idea that I wanted to make stuffed peppers with Italian sausage, but I wasn’t sure where to go from there.  I decided to add in some brown rice and quinoa to bulk up the filling.  Add in some Parmesan cheese and then top those peppers off with tomato sauce and shredded mozzarella, and a mighty tasty dinner began to come together! 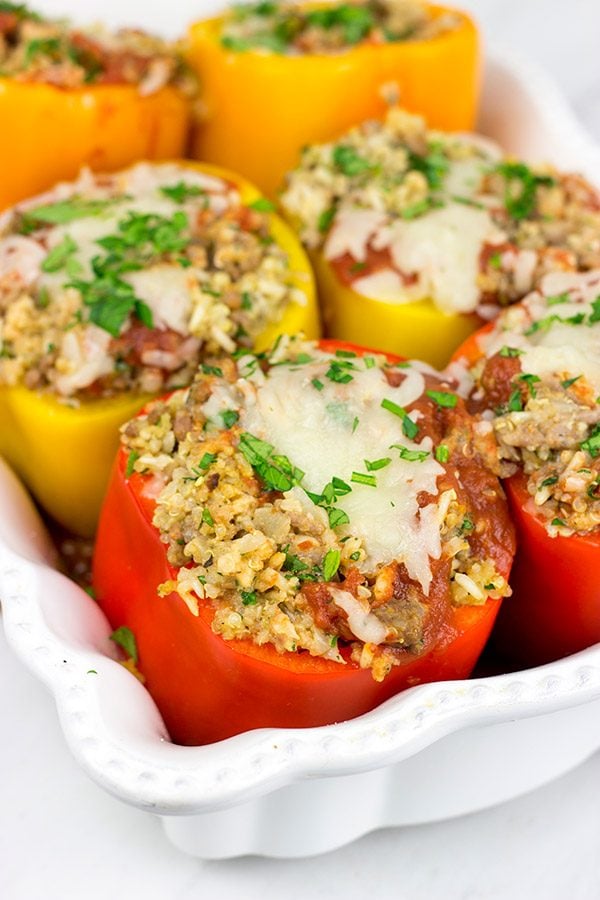 For these Italian Stuffed Peppers, I used both Long Grain Brown Rice as well as Organic Whole Grain Quinoa.  I love both brown rice and quinoa individually, but I find that the two taste even better when mixed together.  Both have a mild nutty flavor, and they make a great base for fillings like the one in these Italian Stuffed Peppers.  Not only did the rice and quinoa bulk up the filling so I ended up with more stuffed peppers, but they boosted the protein in this dish, too.  Win!  Wondering where to buy Bob’s Red Mill products near you?  Click here! 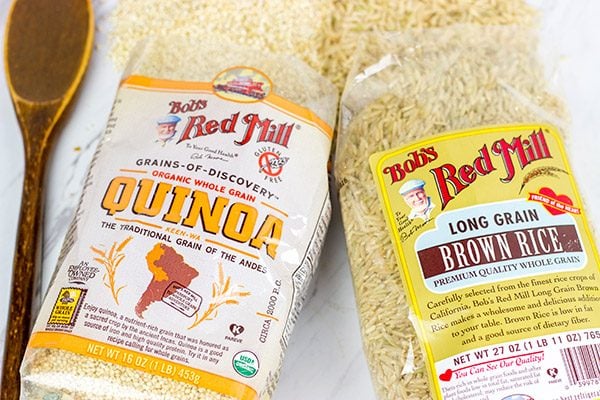 That night, Laura and I ate our Italian Stuffed Peppers while we watched the snow fall in the backyard.  And Robbie sat there with us in his high chair.  He even poked at a bit of the rice and quinoa before giving up and opting for sweet potatoes (his favorite) for dinner.  All in all, I give our snow day an A+.  So next time it snows, grab a sled and act like a kid again!  In the meantime, stay warm and enjoy these Italian Stuffed Peppers! 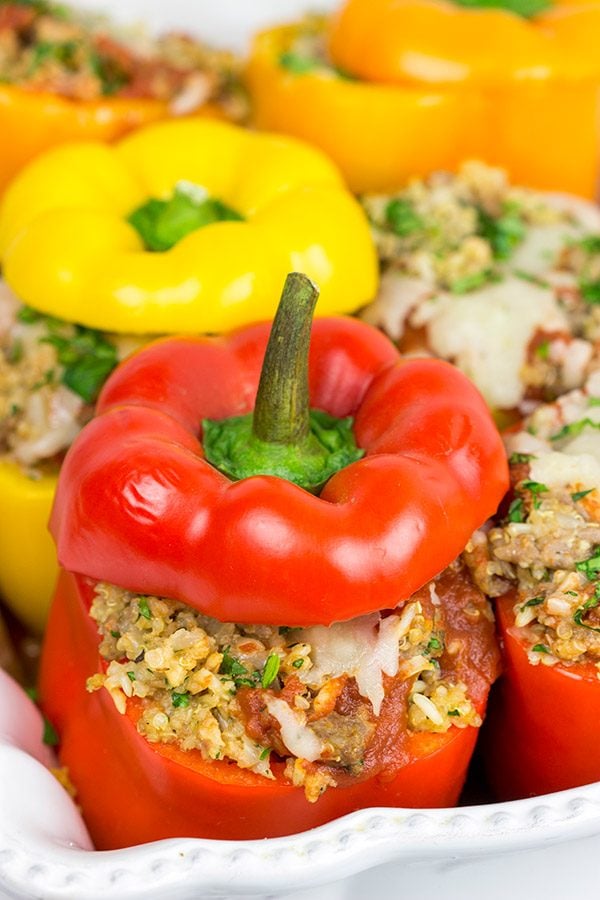 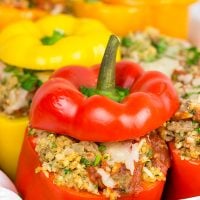 For the Brown Rice

This Italian Stuffed Peppers post was written by me on behalf of Bob’s Red Mill.
The opinions and recipe are all my own.  Thank you for supporting the brands that support Spiced!