These Hickory Smoked Peanuts are surprisingly easy to make, and they’re a fun and unique snack for the next backyard party! 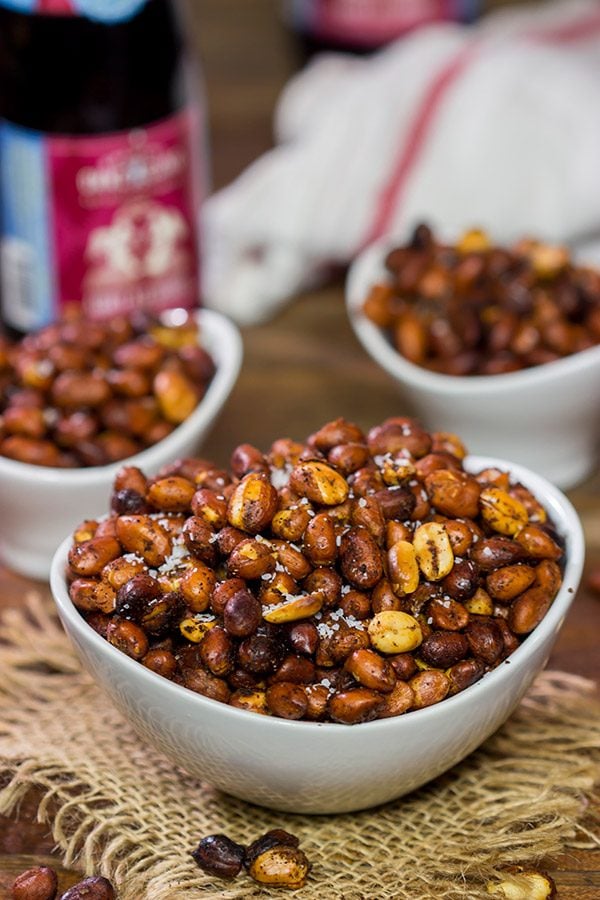 Growing up, my sister and I spent a lot of time running through the woods in upstate South Carolina.  My grandparents lived in a small town where everybody knew everybody else.  My Grandpa was the town magistrate, so he really did know everyone.  Occasionally, I would go with him to work and read comics in the back row of the court room.  However, the best days were when Grandpa would play hooky from work and take me fishing.  Or when peaches were in season, he would “drive me up” to the local orchard where we’d pick peaches and then proceed to eat one on the tailgate of his beat-up old pickup. 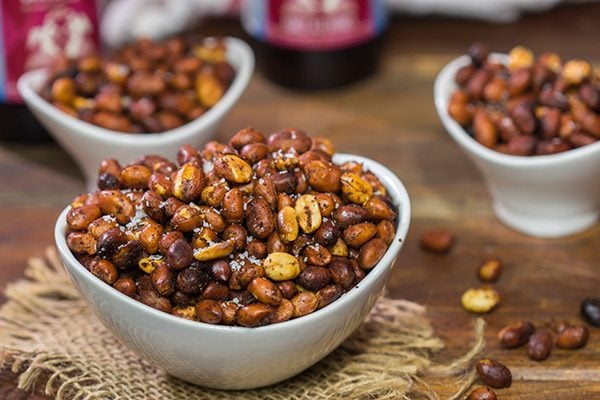 Another favorite activity was grilling in the backyard.  My grandpa built his own grill/smoker using cinderblocks and an old metal highway sign.  (Remember that part about everybody knowing everybody?  I’m sure he got that old sign from a friend at the highway department.)  The grill was right under a massive hickory tree, and each Fall I’d go around collecting hickory nuts in an old plastic bucket.  He’d throw those nuts right onto the coals and the smoke would contribute to the flavor of whatever happened to be on the grill.

Well, that was all 30 years ago.  However, last Fall, we were hanging out with some of our friends who live out in the country here in upstate New York.  They have a bunch of land, and we were meandering down a path behind their house.  That’s when I saw hickory nuts on the ground!  I hadn’t seen those in years.  I immediately started collecting them to bring back home to my smoker.  (Laura just looked at me and shook her head.  My thought is there are far worse things I could be doing than collecting hickory nuts for later use.  So there.) 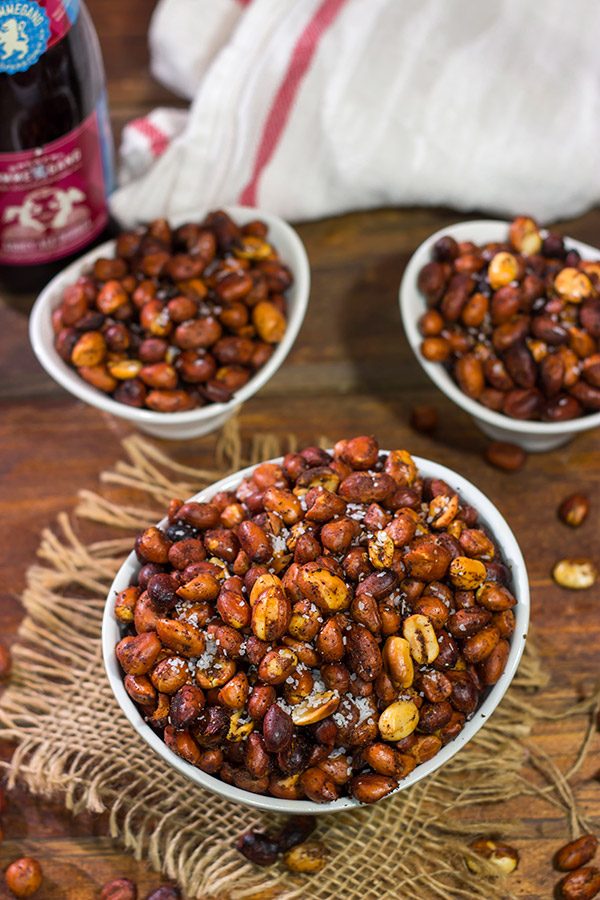 Back last summer, I posted a tasty recipe for Peanut Butter Banana Ice Cream.  When writing that post, I stumbled across Jehangir Mehta, a NYC restaurateur who uses peanut shells in his smoker.  That got me thinking about whether I could smoke actual peanuts.  I took me a couple of months, but I finally got around to testing that theory.  The answer?  Yes, you can make smoked peanuts, and, yes, smoked peanuts are delicious!

For these Hickory Smoked Peanuts, I used hickory nuts from my buddy’s yard.  However, I supplemented those hickory nuts with some actual chunks of hickory wood that I picked up from Home Depot.  (I usually keep large bags of hickory, cherry and mesquite wood chunks around for whenever I fire up the smoker.)  Since I was going hickory here, I used hickory wood.  About 30 minutes later, the smoker was up to temp and puffing away…and it was time to add the peanuts! 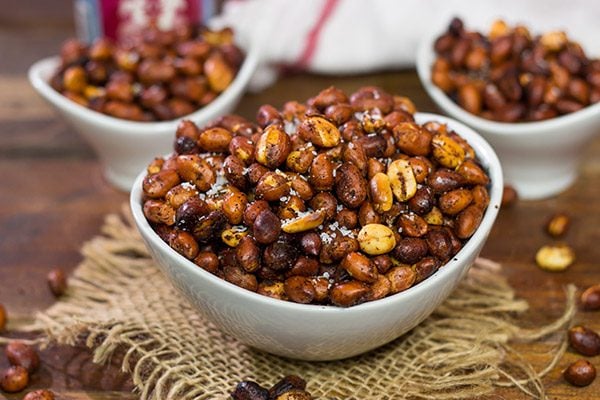 To be fair, I wasn’t sure if smoked peanuts would work.  I read a ton of forums on smoking, and I came away with a mixed bag of results.  In the end, I decided to go with raw, shelled peanuts.  It seemed like you can smoke peanuts in-shell, but the smoke flavor doesn’t really penetrate through the shell very well.  Fortunately, I found a bag of raw peanuts at my local grocery store, so I went that route.  (Raw peanuts are also readily available on Amazon, and they aren’t too expensive.) 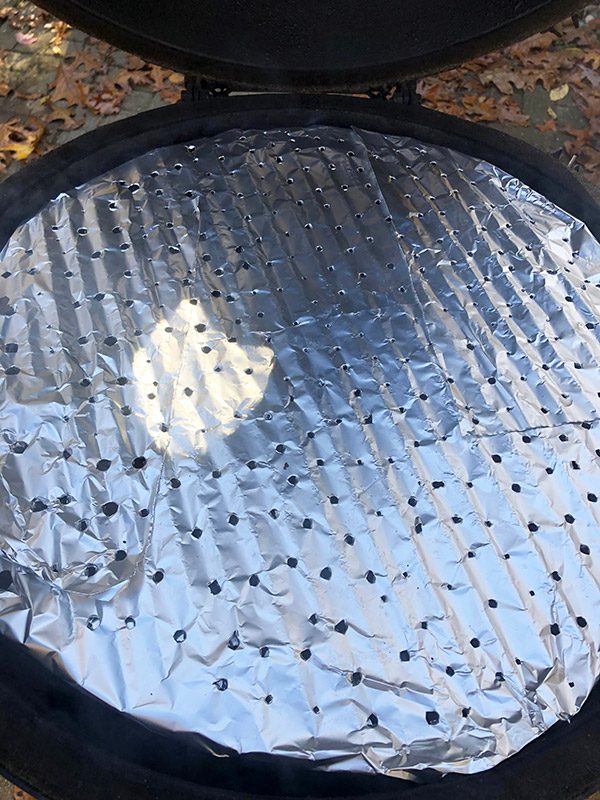 Instead of finding a grill pan with small holes in the bottom, I elected to turn my entire grill grate into a pan.  I simply wrapped foil around the whole thing, and then punched a bunch of holes in it.  The holes were big enough to allow smoke to come through, but they were small enough to keep peanuts from falling through into the coals.  After about 45 minutes, I noticed some of the peanuts were beginning to turn black.  I decided I was close enough, so I pulled ’em all off and let the nuts cool.  (Word of warning: the warm peanuts will be soft.  They will harden back up once they cool.) 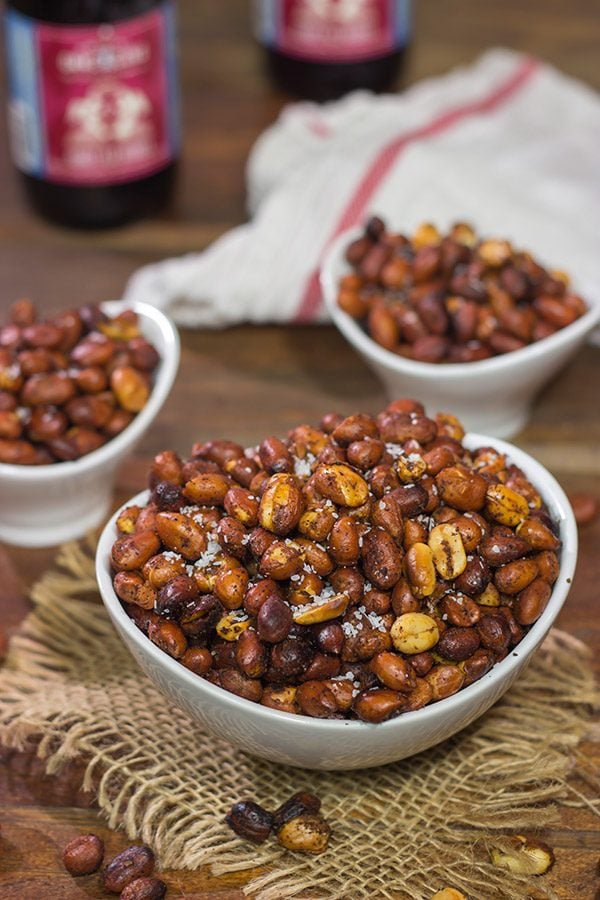 One bite.  That’s all it took.  One bite of these smoked peanuts, and I was hooked!  I was shocked at how easy it is to make smoked peanuts, and these make for one heck of a tasty snack.  Even Robbie got in on the action.  He loves peanuts, but I wasn’t sure if he’d go for these since they looked different than the traditional cocktail peanuts that he eats.  But he grabbed a handful, ate one and then gave me a thumbs up while saying “Perfect, Dad!”  Man, that melted my heart right there.  I hope you get a chance to make these smoked peanuts at home, and I hope you give ’em the thumbs up as well.  Happy smokin’, my friends!

Did you make a batch of these Hickory Smoked Peanuts at home?  Leave a comment, or snap a photo and tag me on Instagram (@Spicedblog).  I’d love to see your version! 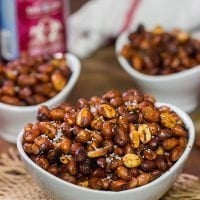 Looking for other smoker recipes?  Check out a couple of my other favorites below! 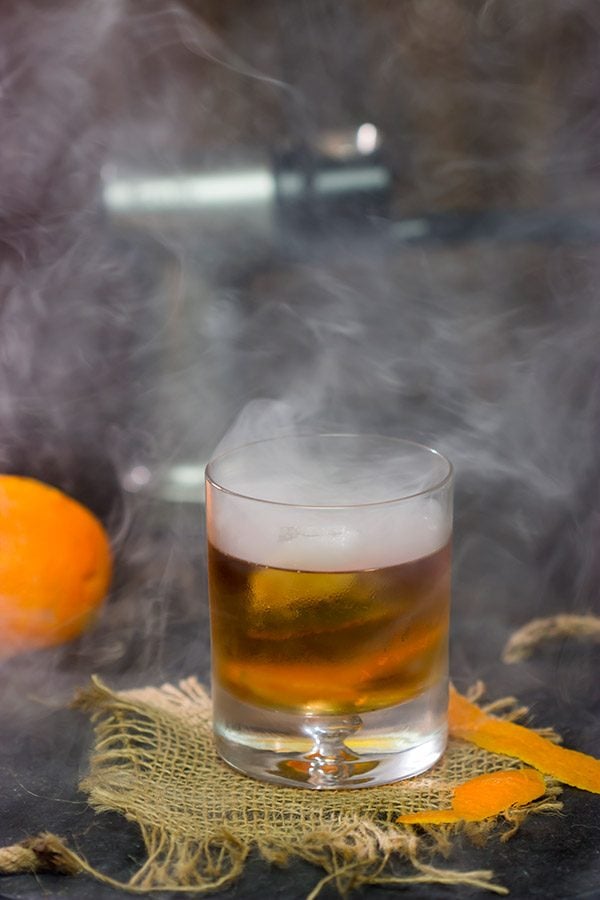 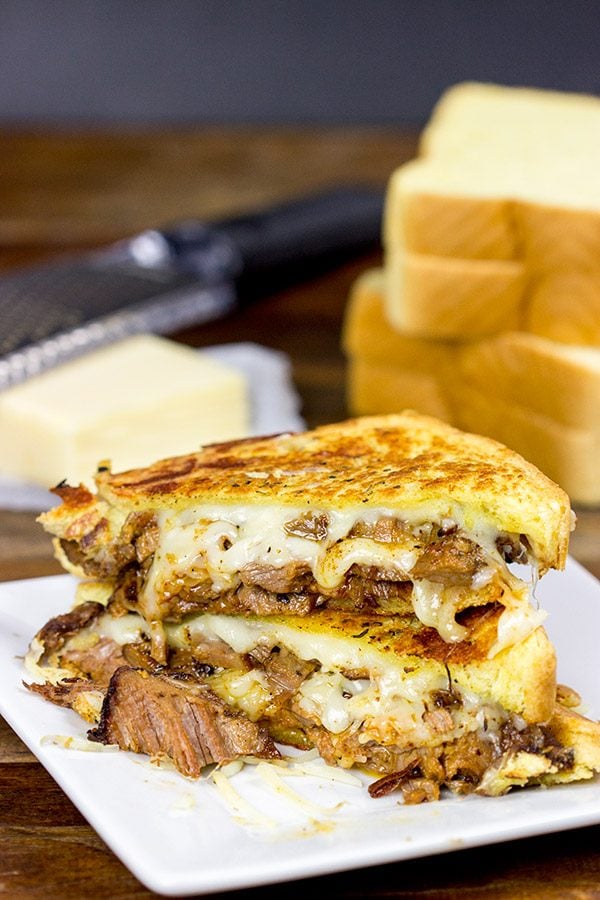 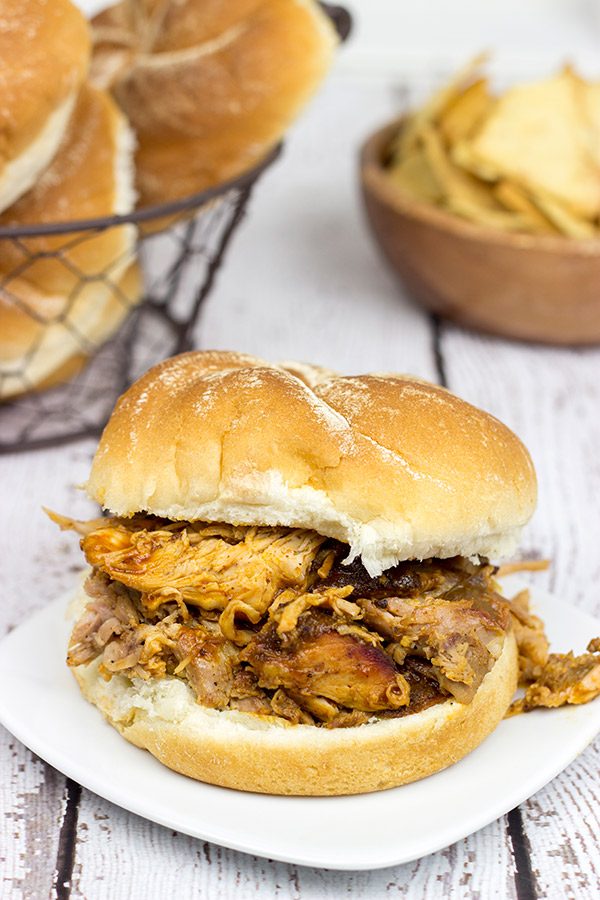