These German Chocolate Brownies feature a chewy, chocolate base topped with toasted pecans and coconut! 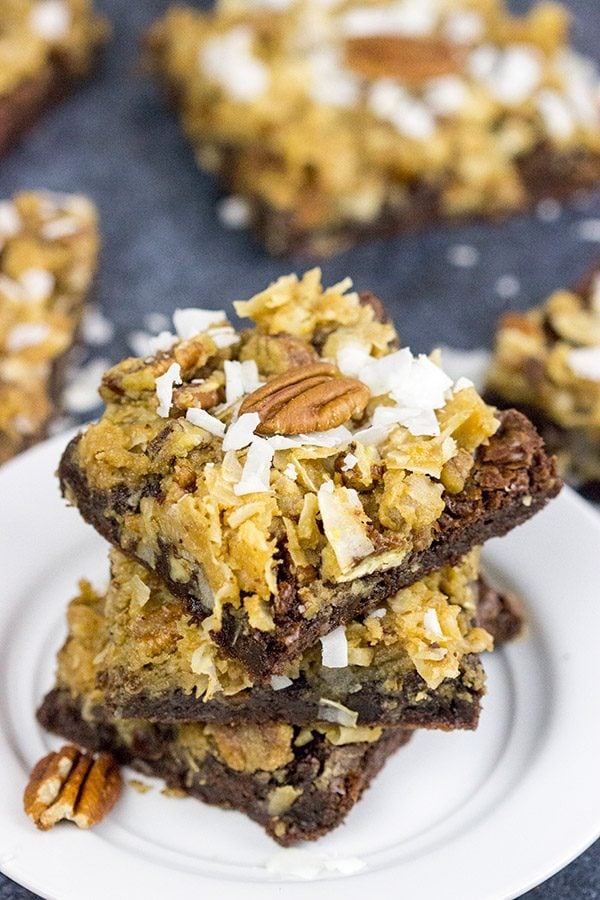 And with that, I rest my case.  What case is that, you ask?  Well, one that is very, very important.  A debate that has raged for 85 years.  Is Goofy a cow or a dog?

We all know Goofy, right?  The lovable, yet clumsy cartoon character who is one of Mickey’s best friends.  Last weekend, we were sitting around chatting with one of our friends while Robbie watched Mickey Mouse Clubhouse on tv.  (For any parents of toddlers, I’m sure you know this cartoon…and I’m sure you cringe whenever you hear the Hot Dog Song, right?) 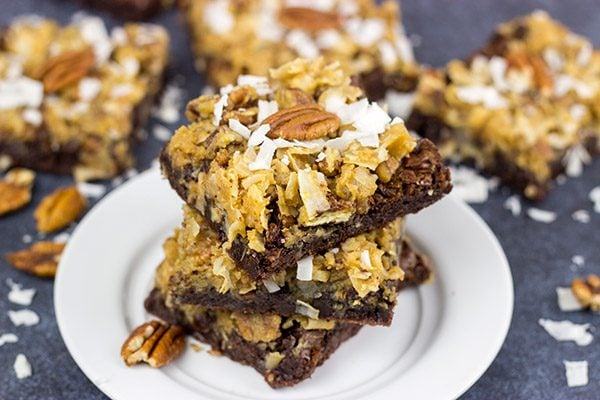 Well, at some point, we looked up and saw Goofy on the screen.  And I happened to ask whether Goofy was a cow or a dog.  Laura swore he was a dog.  Our friend was undecided.  I said I wasn’t sure, but that he definitely was more cow than dog.  I mean Pluto is the dog in the cartoon, so it didn’t make sense that Goofy would be a dog, too.  With that, I reached for my phone and turned to the source of all wisdom: Google.  Sure enough, as I typed “Is Goofy a…,” Google autofilled with “cow or dog.”  Ok, so I’m not the only one who has pondered this one.

So Goofy might look like a dog in that he has long, floppy ears.  However, according to one source, Goofy was created by Disney in 1932.  His original name was Dipalwa Dawala, and he’s actually an Aberdeen-Angus cow from Scotland.  I kid you not, folks.  However, this site makes a sound argument that Disney decided in the 1930’s that his characters needed to all be American.  After all, America was on the brink of World War II against Hitler at the time, so it makes sense that Disney would circle the wagons and promote American characters, right?  For the record, the author later admitted that while the article is fictional, it is based on early Disney cartoon shorts.  So I guess that leaves us back where we started, huh? 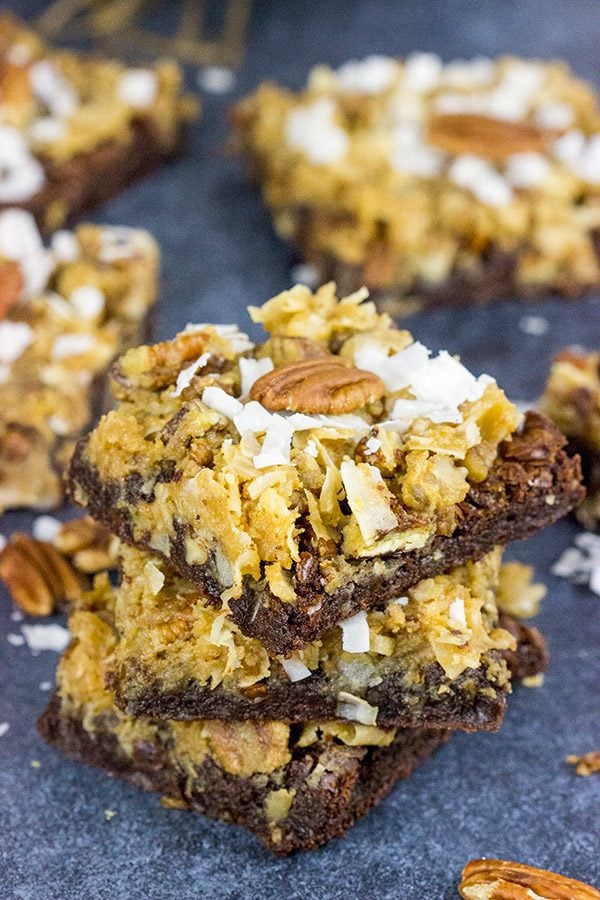 In a completely shameless effort to sway the jury, I offer up these German Chocolate Brownies.  These brownies feature a deliciously chocolaty base topped with a combination of coconut + toasted pecans.  It’s German chocolate cake…in brownie form!  And trust me when I say that these German Chocolate Brownies are irresistible.  I might have eaten all of the crust pieces while I was taking pictures.  (Of course, making brownie crusts disappear is one of my favorite tricks!) 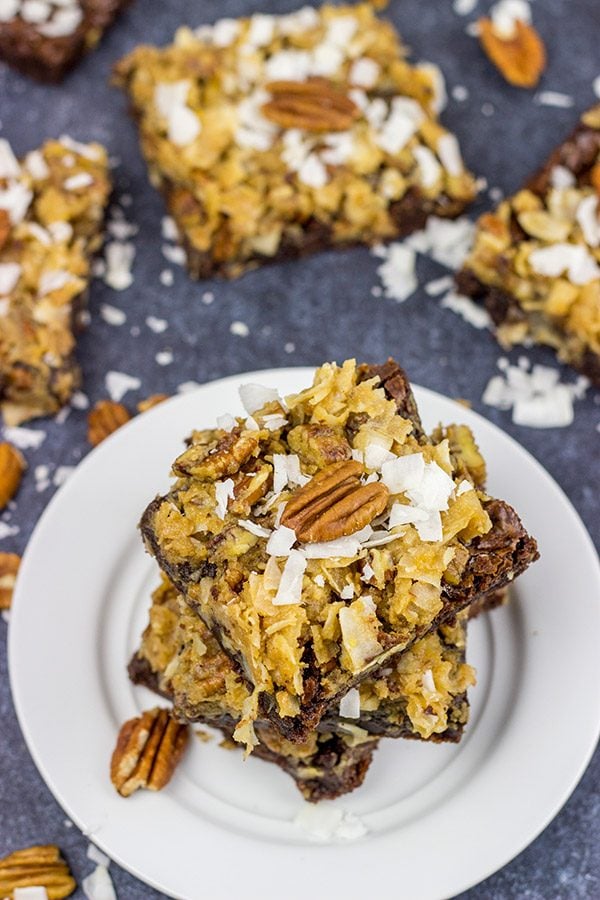 Oh, and did you know that German Chocolate Brownies (and German Chocolate Cake for that matter) have nothing to do with Germany?  Nope, this chocolate was created by a man named Sam German.  The chocolate is similar to semi-sweet chocolate, but it has a bit higher sugar content…so recipes with German chocolate tend to be a little sweeter.  You can absolutely just use semi-sweet chocolate though.  The recipe will still work.  The brownies will still taste delicious.  And Goofy will still be a cow.  Yes, a cow with a doglike nose.  But a cow nevertheless.

And next time you find yourself watching a Disney cartoon (particularly Mickey Mouse Clubhouse), just pay attention to the interaction between Goofy and Clarabelle Cow.  It is clear they are more than friends, although the writers only offer subtle hints and clues.  So is Goofy a cow or a dog?  Let’s bake up a batch of these German Chocolate Brownies and watch some old Disney cartoons in hopes of finding an answer!  (Ok, that’s just an excuse to make German Chocolate Brownies….as if we really needed an excuse.)  Either way, enjoy my friends! 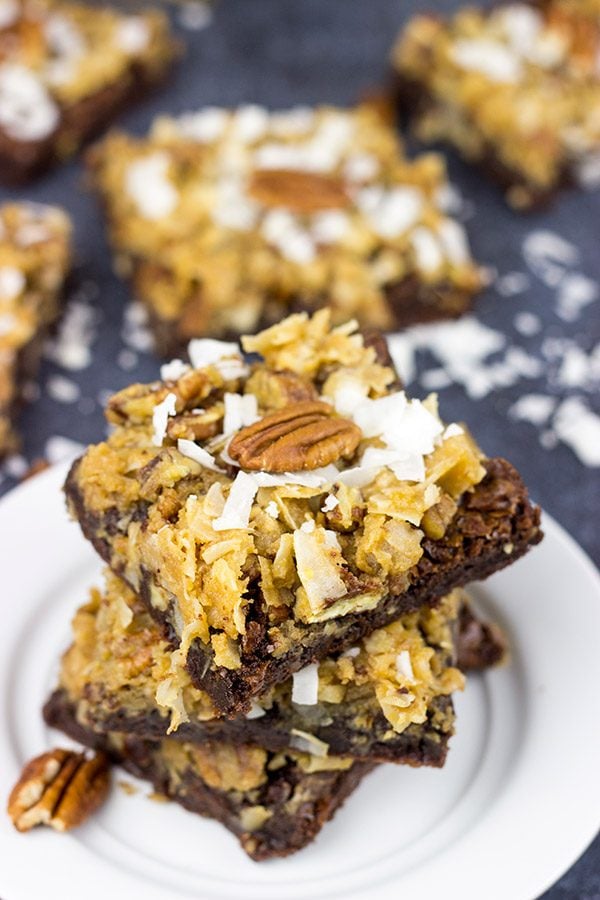 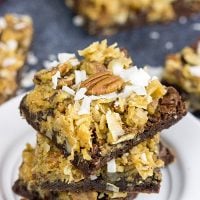