These Eggnog Spice Cupcakes feature eggnog in both the cupcake and the buttercream frosting! They are a great dessert for the holiday season!

One of my favorite things about the holidays is nutmeg.  Yes, seriously…nutmeg.  Ok, there are other things I love too…for instance cinnamon.  Especially if the aforesaid cinnamon is paired with nutmeg.  So you can imagine my excitement when the eggnog starts to show up on store shelves this time of the year!  As if drinking the nog isn’t enough, I decided I needed to incorporate it into a cupcake this year.

My neighbors and coworkers devoured the extra Holiday Spice cupcakes that I had, so you would be smart to go ahead and make extras!

If you wanted to make these adult-themed, you could incorporate some rum into your cream cheese frosting.  Just be aware that you will need to add more powdered sugar to offset the additional liquid.

Why didn’t I think of this last year!?!

Did you make these cupcakes at home? Leave a comment, or snap a photo and tag me on Instagram (@Spicedblog) – I’d love to see your version! 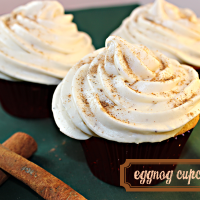 This is my dog, Maximus.  And this is his reaction when I showed him the Eggnog Spice Cupcakes and told him he couldn’t have any.