This Classic Pumpkin Pie features an extra silky pumpkin filling and a flaky pie crust.  It makes for one tasty sweet Autumn treat! 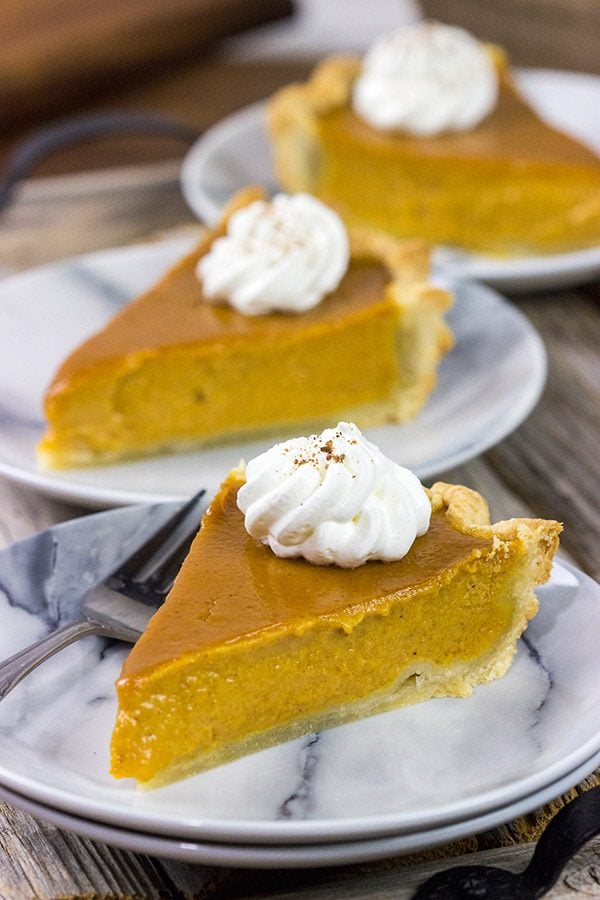 In the past, I’ve wondered what folks do with those gigantic pumpkins that they grow for ‘largest pumpkin’ contests.  I mean, 2,500 pounds of pumpkin is a lot of pumpkin!  What do you do with that after Halloween is over?  Well I think I found the answer.  Give ’em to the elephants!  Animals love pumpkin, so it only stands to reason that large animals love large pumpkins.  I first heard about Squishin’ of the Squash last year as an event at the Oregon Zoo.  Turns out several zoos around the country host squash-squishin’ events.  Oregon is a bit of a drive for us here in upstate New York, but the Syracuse zoo hosts a similar version.  I’m thinking Robbie would love to see elephants devour gigantic pumpkins.  Heck, I want to see that!

As Thanksgiving season is sneaking up on us quickly, I thought it would be fun to include a tried and true Turkey Day recipe: classic pumpkin pie.  To be fair, pumpkin pie as a classic Thanksgiving dessert isn’t exactly historically accurate.  The Pilgrims and Indians at Plymouth Rock would likely have eaten pumpkin in some form, but it most certainly was not in the pumpkin pie form that is so ubiquitous this time of the year.  That’s ok, though.  Historically accurate or not, a good classic pumpkin pie is hard to beat! 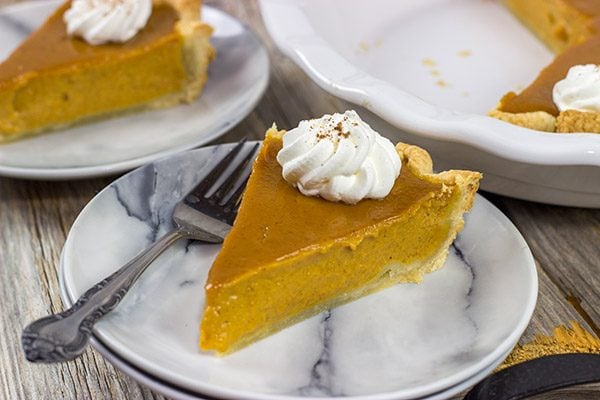 We always make 2 pies for Thanksgiving.  1 is this Brown Sugar Pecan Pie.  Some day I’ll get around to re-taking these photos, but that day is not today.  Just know that I pull up that recipe every Thanksgiving.  The 2nd pie?  Well that one is on rotation.  We’ve done chocolate pies, buttermilk pies, sweet potato pies.  Basically whatever sounds like a fun addition to the Thanksgiving menu!  This year the classic Pumpkin Pie will be slotted into the 2nd pie position. 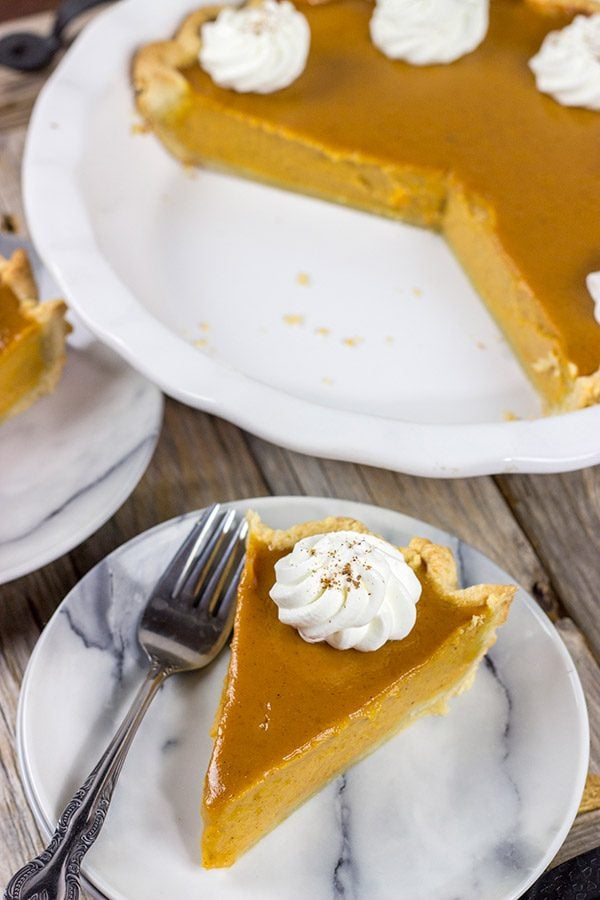 I’ve made a number of pumpkin pies in the past, but I tried a couple of new tricks this time.  First, I strained the filling for this classic pumpkin pie through a fine-mesh sieve.  That led to an extremely silky texture to the filling.  No more grainy pumpkin pie!  Laura actually caught this as she noted the silky texture after just one bite.  I’ve gotta say that I’ll be straining (sieving?) my pumpkin pie filling from now on!

The other trick?  Vodka.  With the holidays approaching, we’ve always got plenty of liquor in the cabinet.  (How else are you supposed to get through holidays with the in-laws!?  Just kidding!)  I stumbled across the concept of using vodka in pie dough from a NY Times article.  This isn’t just a sneaky way to incorporate alcohol in your dessert.  Nope, there’s actually a scientific reason here. 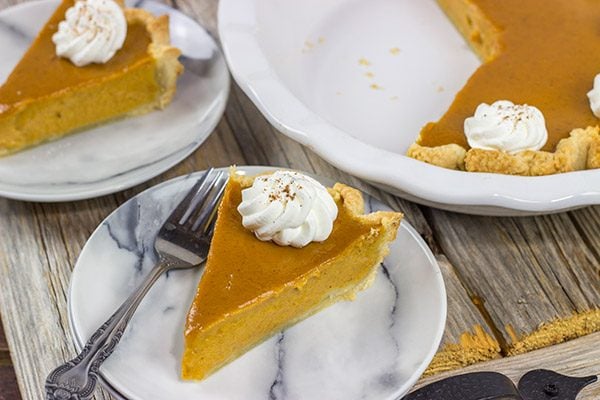 When water is mixed with flour, gluten forms.  We like gluten when it comes to things like pizza crusts, bagels and breads.  We don’t like gluten in things like pie crusts.  Here’s the trick: alcohol doesn’t contribute to the formation of gluten.  Vodka is often used in pie crusts simply because it’s the most flavor-neutral of alcohols.  The result is a flakier crust, and I’ve got to say that this will be my go-to pie dough recipe from now on!  Actually, I kinda want to try this with bourbon now.  I know it’s not flavor-neutral, but I think the combination of bourbon with pumpkin and cinnamon would be quite tasty.  Or perhaps an apple pie with a bourbon crust?  Oh yeah, that needs to happen now!  (Oh, and it’s worth noting that the alcohol bakes off in the oven, so this is still safe to serve to the kiddos.) 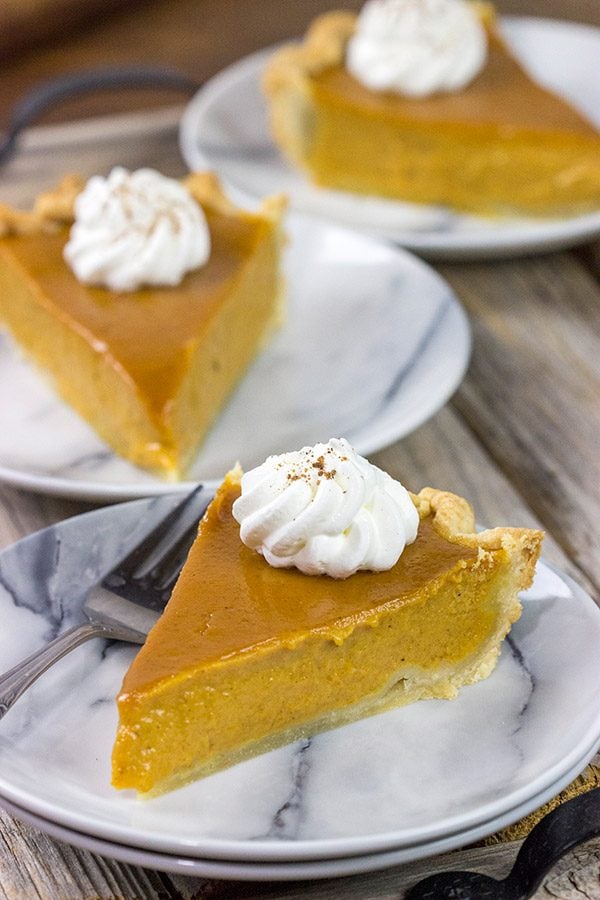 If you’ve looking for a mighty tasty pie for Thanksgiving this year, then put this Classic Pumpkin Pie on the menu!  The silky texture combined with the flaky crust (thanks, vodka!) make for one delicious Turkey Day dessert.  Happy baking, my friends!

Did you make this Classic Pumpkin Pie at home?  Leave a comment.  Or snap a photo and tag me on Instagram (@Spicedblog)!

Looking for other tasty pie recipes?  Check out these other favorites: 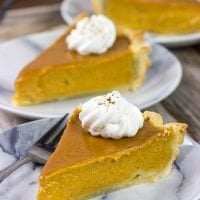 The alcohol in the crust will evaporate while baking. Substituting vodka (or another 80-proof alcohol) for ½ of the liquid in pie dough will lead to a flakier crust once baked. Try it out!