This Cheesy Beef Manicotti is a tasty comfort food dinner…perfect for chilly nights! 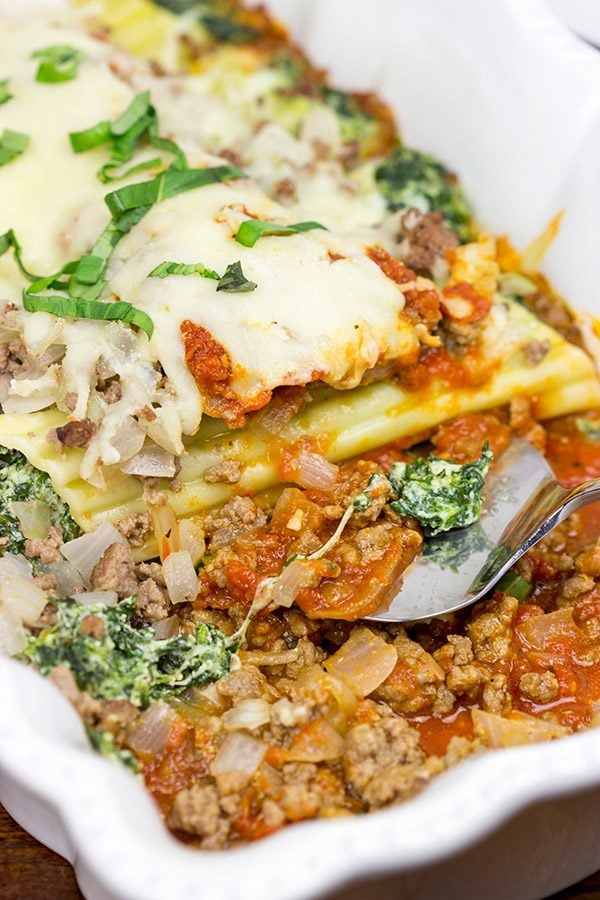 We’ve got our morning routines down to a science around here.  Laura gets Robbie dressed while I get his milk and cereal ready.  Then I feed the little guy, but only after he goes down the steps on his own.  No help from Mom or Dad on that one!  (And if Mom or Dad helps, then be prepared for an all-out meltdown.  Right there in the middle of the landing.  It happened this morning, and it was a whole bunch of not fun rolled into a little package.)  If all goes well, Laura and Robbie are out the door at the same time every morning. 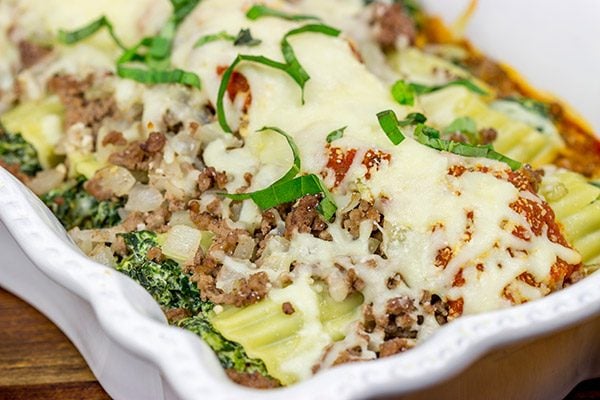 Back in the early part of the summer, I had the opportunity to go out to Nebraska to learn a bit more about the beef industry.  The trip, hosted by the Nebraska Beef Council, included visits to multiple cattle farms across the eastern portion of the state.  Did you know that cattle outnumber people in Nebraska by more than 3:1?  Yup, Nebraska has over 6 million head of cattle and just under 2 million people.  Nebraska is the 2nd largest cattle producing state in the country behind only Texas, but Texas has way more people. 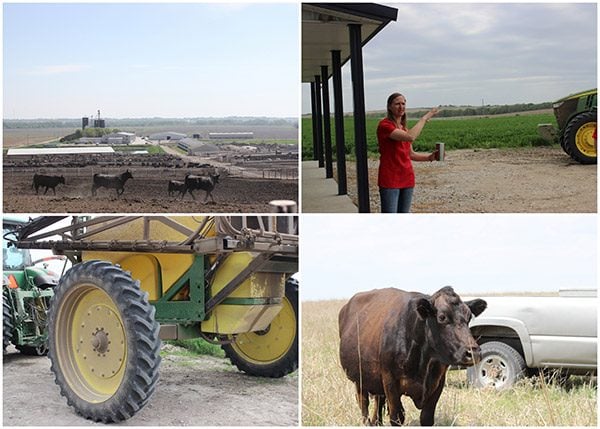 As a food blogger, I spend my days thinking about (and eating) food.  And for me it’s really important to understand where my food comes from.  Did you know that cattle production in the U.S. is actually the largest single segment of American agriculture?  According to the National Cattlemen’s Beef Association, there are ~725,000 beef farms and ranchs in the U.S.  We got to visit several of these on the trip to Nebraska, and the life of a farmer/rancher isn’t easy.  These folks are up early and awake late, and I was particularly struck by the amount of care these ranchers show to their herds.  Sure, beef is a commodity in that it’s bought and sold, but these folks never stop worrying about and caring for their herds.  The average size of a beef cow herd is just 40 head of cattle. 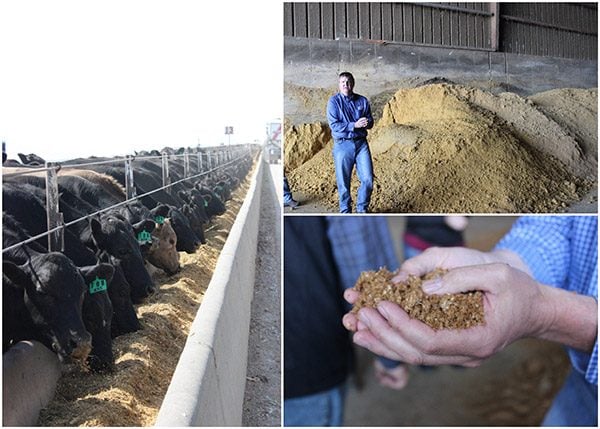 Another aspect of the beef industry that I found amazing was the focus on sustainability.  Many ranchers use spent grains from breweries as part of a nutritious diet for their cattle.  In fact, spent grains are the single biggest source of waste in the brewery industry, and the cost of feed is the biggest cost of raising cattle.  So this is a perfect relationship!  But most ranchers take the sustainability focus one step further, and utilize the manure to fertilize their crops (such as corn) that are then used to feed their herds.  It’s one big circle!

Oh, and one of the coolest sustainability things I saw on that trip?  One rancher was using leftover street sweeper brushes from the city of Omaha.  But he wasn’t using them to sweep his fields.  Nope, he stood those huge brushes up on end, and his cattle love to walk up next to them to scratch themselves.  (I tried to grab a photo, but it turned out a bit blurry.)  Talk about some happy cows!  They eat corn and leftover brewery grains (full of malted barley, wheat, corn, etc.) in the morning and then spend the afternoon scratching their backs on gigantic street sweepers. 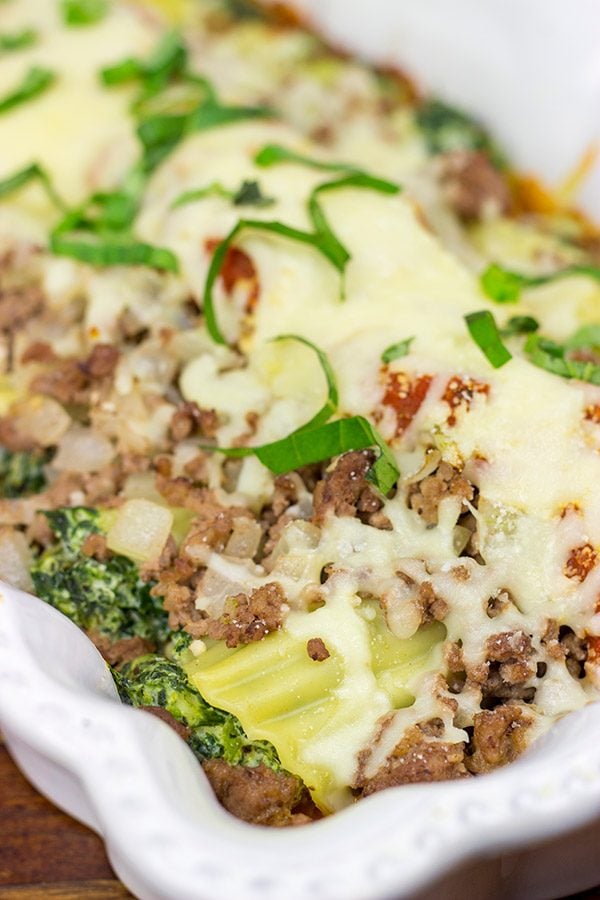 I learned way more about the US beef industry than I could ever hope to squeeze into a single post…unless you guys want to be reading for the next 2 hours!  But it’s safe to say that the US beef industry is healthy.  It’s a major economic driver for our country, and there are hundreds of thousands of farmers and ranchers who depend on beef.  If you guys have any questions about the beef or the trip, feel free to reach out!  If I know the answer, I’ll get right back to you.  If you stump me, then I’ll reach out to my friends at the Nebraska Beef Council as well as the New York Beef Council to find the answer! 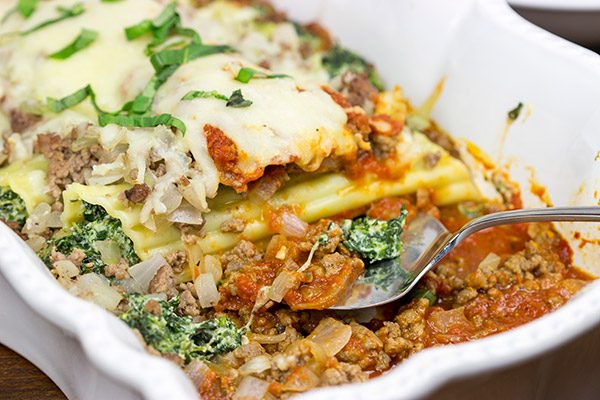 But back to this delicious Cheesy Beef Manicotti!  That’s why you’re here anyways, right?  We love pasta around our house, so I chose to go with manicotti as a base to this recipe.  There’s something about manicotti that just elevates a regular pasta dish into a fancy pasta dish!  That manicotti gets filled with spinach, mozzarella and ricotta, and then the marinara-ground beef sauce gets spooned on top.  This Cheesy Beef Manicotti makes for one amazing dinner!

Looking for another fun manicotti idea?  Check out this Pesto Chicken Manicotti.  It’s a great way to use up any extra basil that you might have in your garden!  Enjoy! 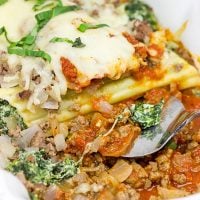