Don’t forget the sweet treats on your appetizer table!  This Cannoli Dip with Cinnamon Sugar Pita Chips takes almost no time to make.  It’s sure to be a party favorite! 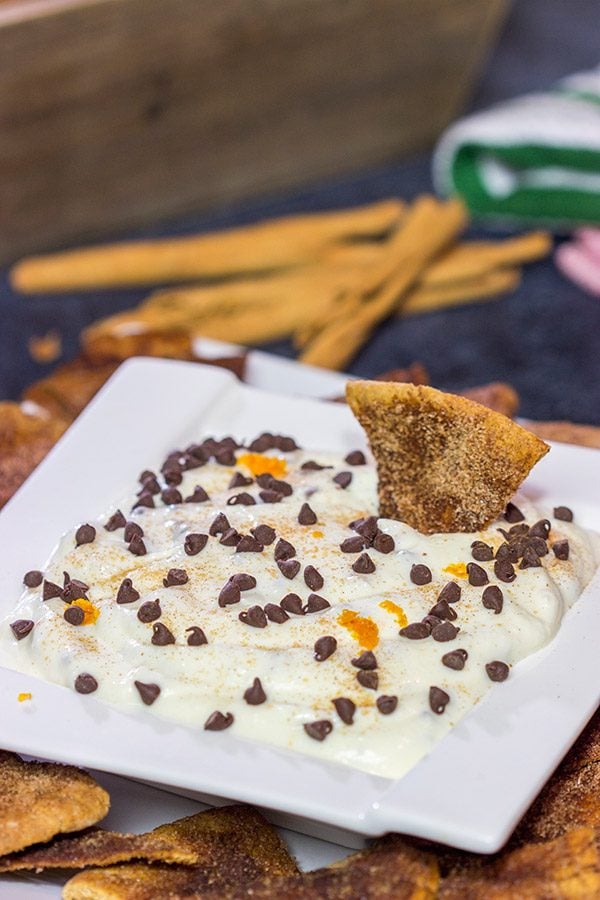 The Godfather.  Talk about a classic!  I remember renting this one when I was much younger, and I remember not enjoying it as I couldn’t understand a thing they were saying.  The strong Italian accents are definitely a challenge, but I’m glad I gave this one another shot.  There’s a reason this one is ranked #1 on IMDB’s list of all-time greatest movies!

One of the most famous lines from The Godfather comes when Rocco assassinates Paulie.  (That’s only a mild spoiler…if you’ve somehow managed to never watch this movie!)  As Rocco gets out of the car, his buddy tells him to “Leave the gun – take the cannoli.”  I couldn’t agree more!  You can’t leave the cannoli behind at the murder scene.  The gun?  Sure.  But not the cannoli! 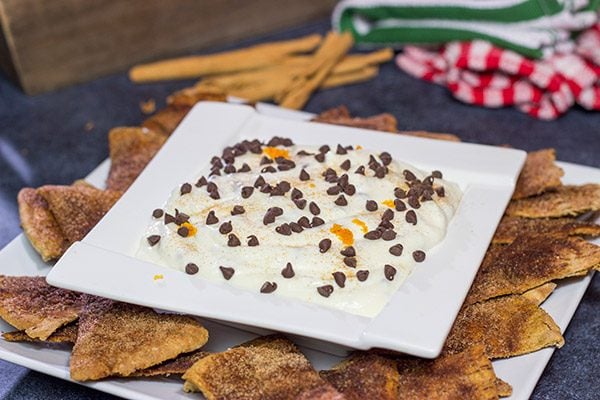 We love cannoli around our house.  As I noted back in this Pumpkin Spice Cannoli post, Laura’s obstetrician’s office was right next to a bakery that makes amazing cannoli.  Lucky for me that Laura had weekly appointments near the end of her pregnancy!  We picked up a couple of cannoli after each visit.  (Also, on a side note, that Pumpkin Spice Cannoli is insanely delicious.  I highly recommend trying it sometime.) 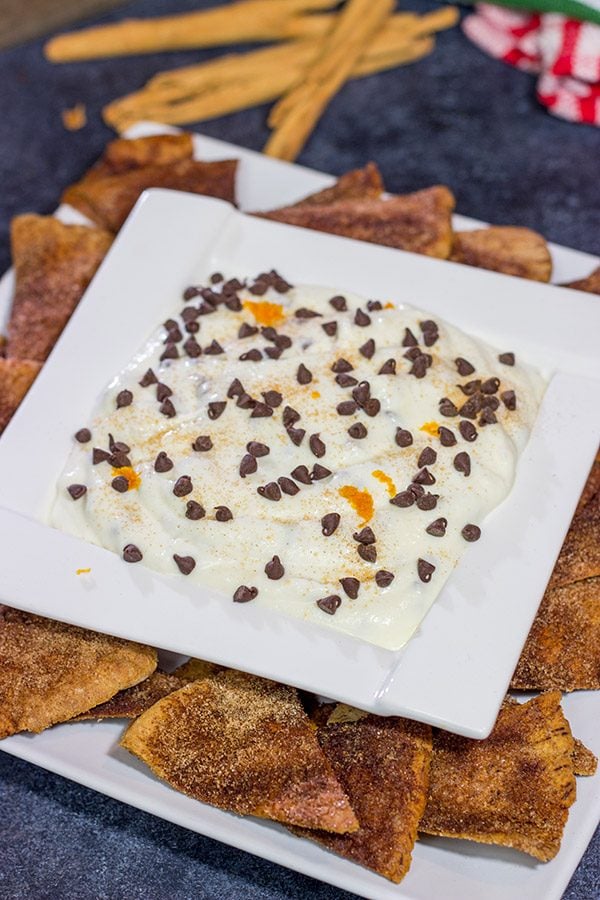 As much as I enjoy a good cannolo (singular of cannoli), sometimes you just need to mix things up.  That’s exactly what I did with this Cannoli Dip with Cinnamon Sugar Pita Chips.  The filling for this Cannoli Dip is very similar to the pumpkin spice version.  The only difference is the pumpkin puree is swapped out for a container of mascarpone cheese.  (Mascarpone cheese is often described as ‘Italian cream cheese.’  Like most European dairy products, mascarpone has a higher fat content which means it has a much richer, creamier taste.) 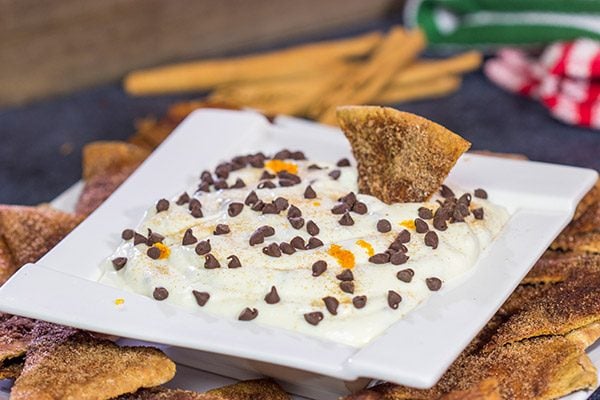 Unlike the pumpkin spice version that I mentioned above, I took a very traditional approach with this Cannoli Dip.  Chocolate chips are a common add-in for cannoli, and I incorporated mini chocolate chips into this dip.  (If chocolate isn’t your thing, then you could totally mix this Cannoli Dip up and add in some toasted, chopped pistachios.)

Another common ingredient is candied fruit.  I thought about making candied citrus peel, but instead I opted for the zest of an orange.  This little trick brought a noticeable, but not overpowering, citrus flavor to the dip.  I’m here to tell ya: if this dip makes it more than an hour into the party, then I’ll be a monkey’s uncle.  (I like to use this zester for zesting citrus fruit as well as shaving bits of chocolate as a garnish for desserts.) 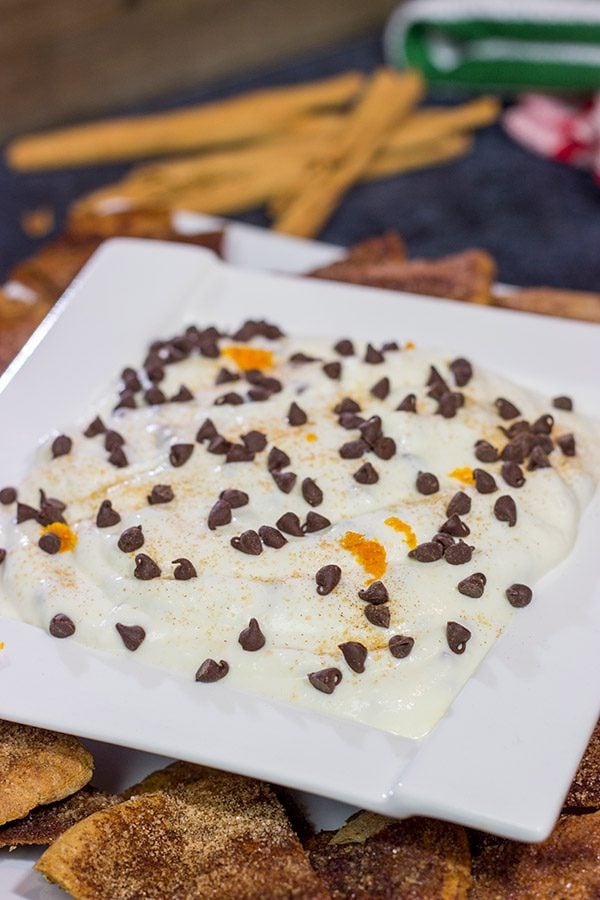 Although eating Cannoli Dip straight out of the bowl with a spoon might be delicious, it is generally frowned upon in the company of others.  To solve this problem, I baked up a batch of cinnamon sugar pita chips.  These couldn’t be easier to make!  Just slice up some pita bread, brush them with olive oil and then give ’em a good shake with cinnamon sugar.  Bake the triangles up in the oven for about 10 minutes, and you end up with the perfect dippers.  Of course, if you choose to take the bowl of Cannoli Dip into the other room and eat it with a spoon, then I won’t judge you.  Enjoy!

Did you make this Cannoli Dip with Cinnamon Sugar Pita Chips at home?  Leave a comment.  Or snap a photo and tag me on Instagram (@Spicedblog)!

Looking for other sweet treats for the appetizer table?  Check out these other favorites, too: 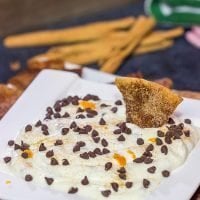 For the Cannoli Dip

For the Cinnamon Sugar Pita Chips

For the Cannoli Dip

For the Cinnamon Sugar Pita Chips