This Sour Cream Pound Cake with Cinnamon Walnut Swirl is a tasty (and easy) recipe that can be served for dessert or breakfast…or both! 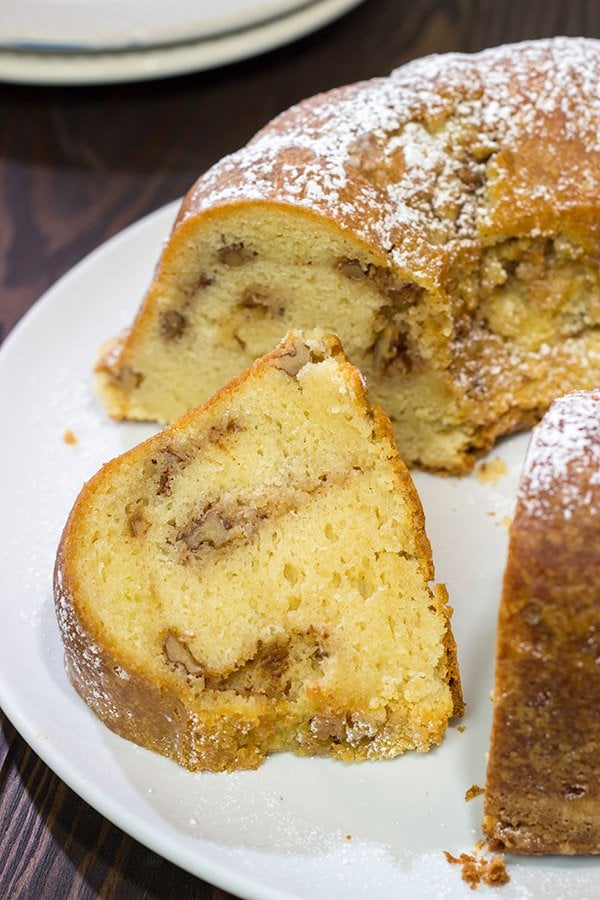 Pound cakes are one of those desserts that often face an identity crisis.  Are they meant to be a dessert?  Or should they be served for breakfast?  They work well for both occasions, so I say let them have a split personality!  Serve up with this Sour Cream Pound Cake for dessert one night, and then serve up more for breakfast the following morning.  I don’t think anyone would be sad about that! 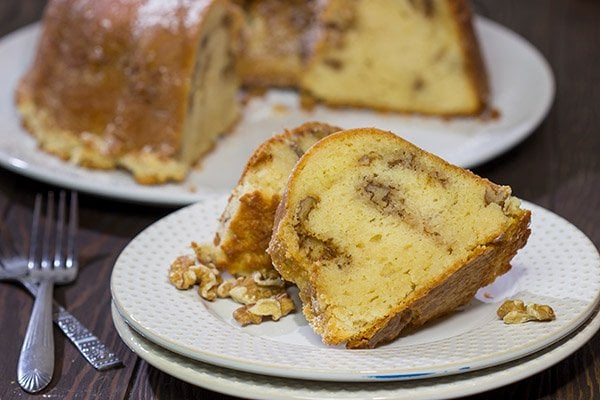 Growing up, pound cakes were always one of my favorite desserts.  Put a slice in the toaster oven so it got just a little warm and crispy on the edges?  Oh yeah!  That made for one heck of an after-school snack!

As much as I love my Mom’s pound cake recipe, I’ve updated it slightly over the years.  I’ve added some sour cream to her tried-and-true recipe.  Sour cream adds moisture without thinning out the batter, and it also helps activate the baking soda.  One bite of this Sour Cream Pound Cake with Cinnamon Walnut Swirl and you’ll understand why I’ve updated my Mom’s go-to pound cake recipe.  This one is delicious, folks! 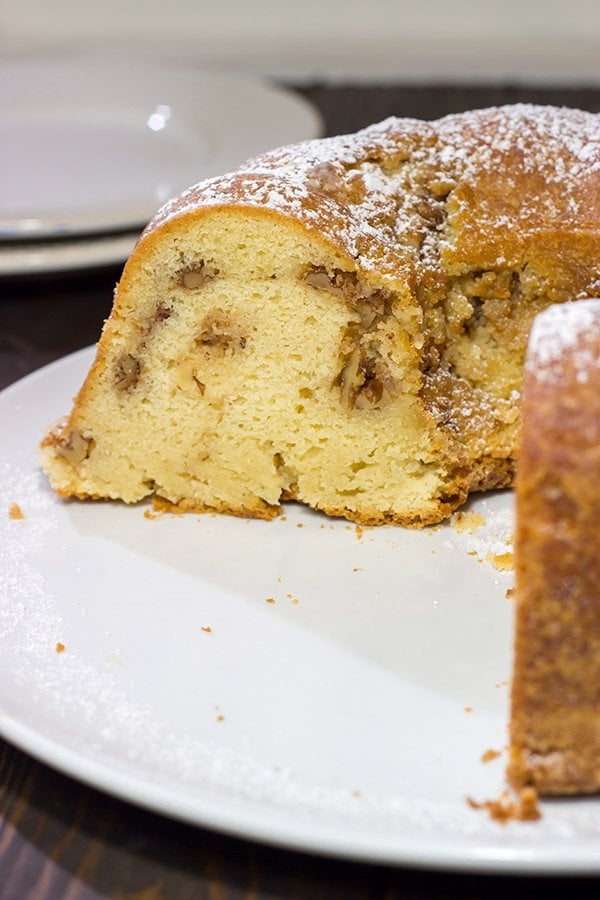 Speaking of delicious, I went one extra step and adding a Cinnamon Walnut Swirl into the middle of this pound cake.  It’s a fun (and unexpected) treat when you slice into this one!  Don’t like walnuts?  That’s cool.  I get it.  Walnuts can be polarizing.  I personally love walnuts, but pecans would be another good addition here, too.  And if you don’t like nuts?  Leave ’em out entirely!  I promise the flavors in this Sour Cream Pound Cake will still be delicious! 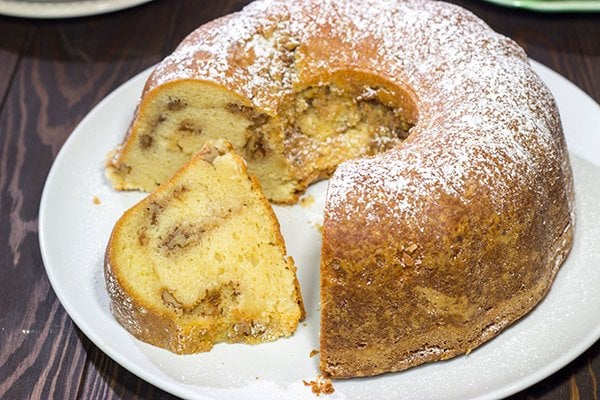 One thing you’ll note about this recipe is that it takes a long time to bake.  The cake stays in the oven for ~90 minutes on a relatively low temperature.  I like going with the low and slow method for this sour cream pound cake as it ensures that the center is fully baked without having to worry about the top (err, bottom?) of the cake burning.  (I say bottom because once the cake gets inverted, the top becomes the bottom.)  Don’t worry – the sour cream ensures that the cake won’t dry out at all! 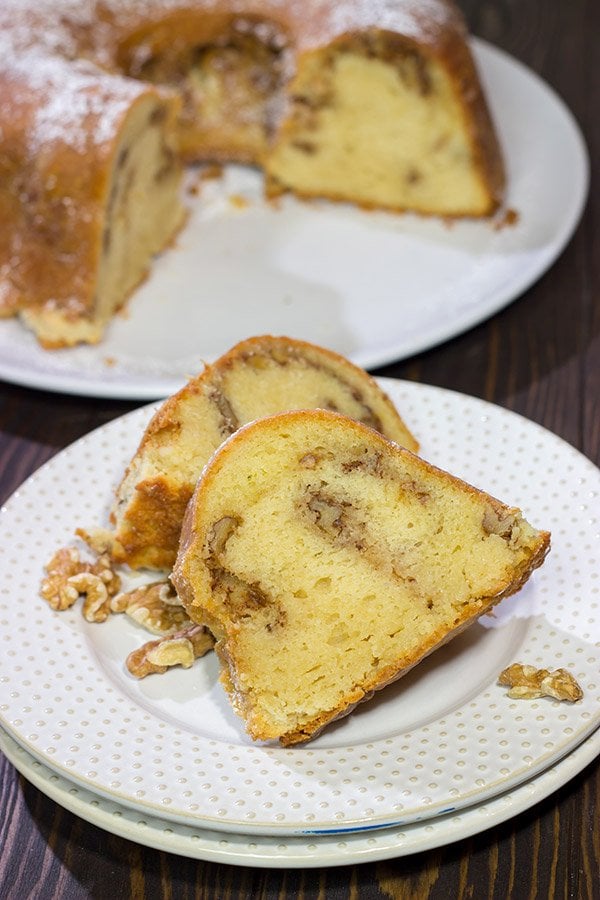 All together, this is a classic Sour Cream Pound Cake, and the results are fantastic.  It’s a good recipe to keep on hand for when friends and family are visiting.  This tasty cake can serve as dessert, breakfast or both!  I hope you enjoy this recipe as much as we did.  It’s on our short list for favorite pound cakes!  Happy Baking!

Did you make this Sour Cream Pound Cake with Cinnamon Walnut Swirl at home?  Leave a comment, or better yet snap a photo and tag me on Instagram (@Spicedblog).  I’d love to see your version! 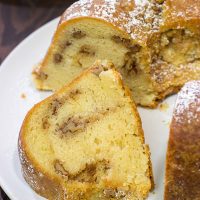 For the Cinnamon Walnut Swirl

For the Cinnamon Walnut Swirl 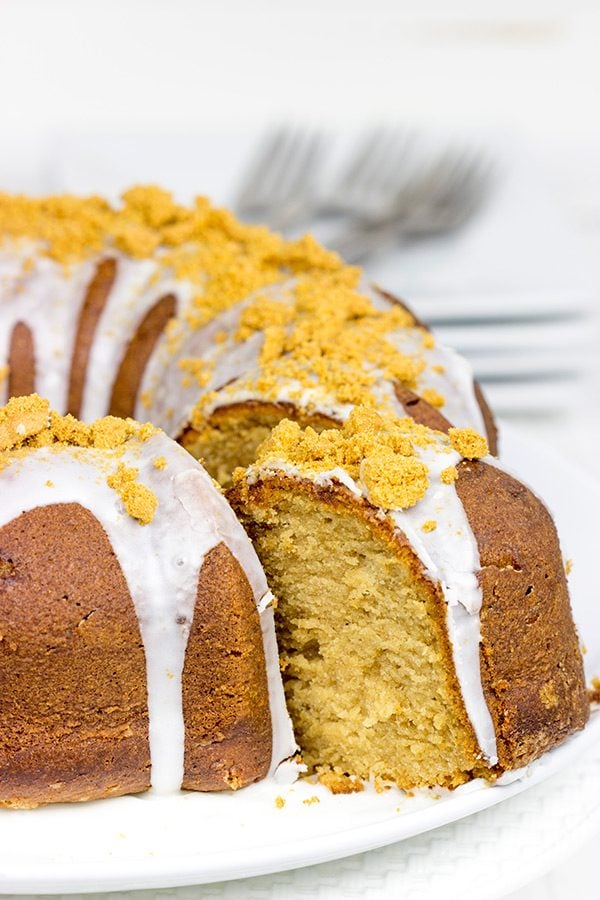 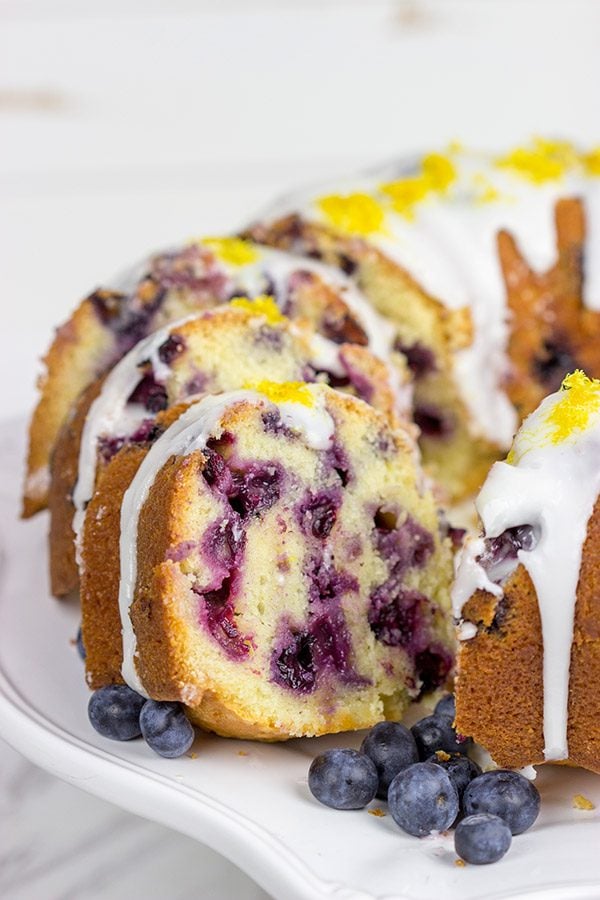 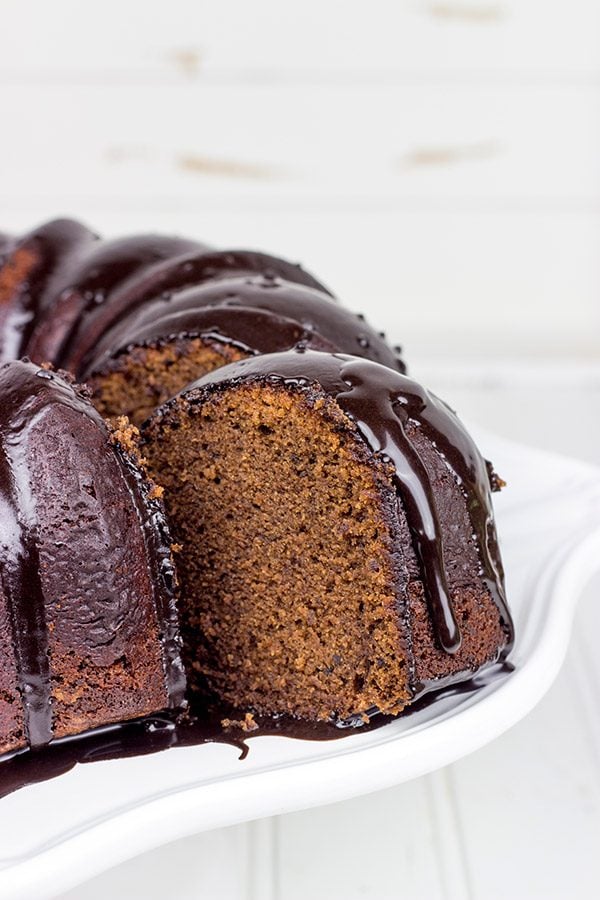