This classic Snickerdoodle Cookie recipe is crispy on the edges and chewy in the center…just the way snickerdoodles should be! Make a batch today!

I don’t think I’ve ever mentioned it on the blog, but in addition to running Spiced, I also teach high-school Latin.  And I love it!  You may remember my post a while back where I talked about taking Latin myself.  Check out the Campenelle + Italian Sausage, Peas, and Pamigiano Reggiano Cream Sauce post!

How many of you took Latin at some point in high school?  If so, I bet you have fond memories of farmers standing in the fields talking to their daughters.  As if the Romans never did anything else!  But I digress…and you are probably wondering what Latin has to do with a food blog.  Well one of my student had a birthday recently, so I made a batch of Snickerdoodle cookies for the class.  Hey, if I get my pick of what cookies to make, then you can bet they will involve cinnamon somehow!

These cookies are incredible!  I love Snickerdoodles, and I’ve certainly eaten my fair share of them.  But sometimes they are too “bready” or don’t have enough flavor.  This recipe solves those problems!  The hardest part is letting the cookies cool before eating them.

One of the tricks I used when I creating this recipe was rolling the ball of cookie dough in cinnamon and sugar in addition to putting cinnamon and sugar in the dough itself.  And needless to say, these bad boys are loaded with flavor!  So next time you’re in the mood for cookies and want something a bit different than the standard chocolate chip…then remember this post and make some Snickerdoodles! 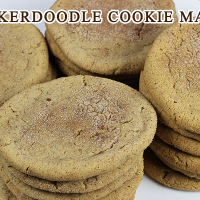 For the Cinnamon Sugar coating