This Smoked Old Fashioned introduces maple syrup and smoke for a fun twist on a classic cocktail!

Every since Robbie was about 1 year old, Laura and I have made a point of having a date night every other week.  This idea sorta fell into our laps when we needed a babysitter last minute (we had tickets to The Lion King).  I happened to mention something to his daycare teacher when I picked the little guy up, and she said she could watch him.  That soon evolved into regular babysitting nights…and regular nights when Laura and I could have adult conversations.  (Let’s be real, though.  Most of the time we just talked about Robbie anyways.  I know you parents out there can identify.)

But here’s the thing.  Regular date nights are awesome, but sometimes it’s hard to fill 3 hours.  (We have a 3-hour minimum rule.  We figure if our babysitter is giving up her night, then we should stay out at least 3 hours to make it worth it.)  Think about it.  Going out to eat takes what?  An hour.  Maybe an hour and a half?  Ok, two if you really push it and order appetizers and dessert – which we don’t do that often.  We’ve been known to go to Home Depot on our date nights.  Seriously.

We’ve solved this “problem” by dropping by a local distillery for a drink.  Sometimes it’s before dinner, sometimes it’s after dinner.  Either way, it’s a great way to fill up the extra time.  And Laura and I get to enjoy a tasty cocktail, too.  #Winning!

Several months ago, we dropped by Yankee Distillers for a post-dinner drink.  It was a fairly quiet Saturday evening, and the two distillery dogs greeted us as we sat down on the comfy leather chairs in the corner.  I opted for my usual Old Fashioned, while Laura ordered a cucumber vodka lemonade.  That’s when the bartender asked me if I wanted my Old Fashioned smoked?  Say what?  Smoke my drink?  Uh, yes, please!

Let me tell ya something.  The bartenders at Yankee Distillers make a darned good Old Fashioned.  But they make an even better Smoked Old Fashioned!  I’ve watched them make this drink enough over the past several years that I could pretty much recite it from memory.  (Luckily, they were nice enough to share their recipe on Facebook a while back, too.)

An Old Fashioned is a classic bourbon cocktail.  The ingredients list is short, and it couldn’t be easier to make, too!  Basically mix bourbon whiskey with some simple syrup, bitters and a twist of orange peel.  But here are a couple of tricks for taking your Old Fashioned from good to great.

Garnishes for an Old Fashioned

An Old Fashioned is a simple, classic cocktail, and it doesn’t need much in the way of garnishes. A couple of ice cubes and an orange peel is how I usually roll. However, I have seen these served with a rosemary sprig if you’re looking to make it a bit fancier!

Instead of simple syrup (which is just sugar and water), use maple syrup instead.  You need some sort of sweetener in a Smoked Old Fashioned, and the maple syrup adds an unexpected (and delicious) depth of flavor.  Just don’t use that “maple syrup” in a squeeze bottle.  Use the real thing.  (We’re big fans of Runamok Maple Syrup from northern Vermont.  They were on Oprah’s list of favorites several years ago, and they make a number of fun syrups.  Think maple syrup aged in rye bourbon barrels.  Fun!  Fortunately for us, Runamok has a storefront on Amazon.) 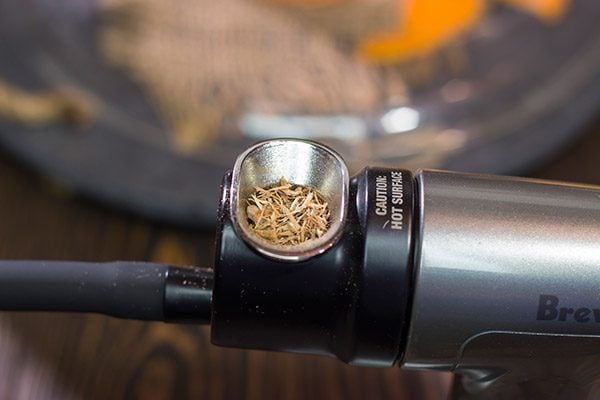 Bitters are just that.  Bitter.  But when added to a drink, they can really start to work their magic.  Angostura bitters or orange bitters are the most common, but Yankee Distillers uses black walnut bitters in their Smoked Old Fashioned.  The depth of flavor here is amazing!  I noticed that Yankee uses Fee Brothers’ Black Walnut Bitters, so I ordered a bottle from Amazon.  (Is there anything that Amazon doesn’t have!?)  Bitters might seem expensive for a small bottle, but that bottle will last a looong time.  You only need a couple drops for each drink.

Here’s where you can slip into your alterego of evil bartending wizard.  If you haven’t come across smoking guns yet, then you need to be introduced.  ASAP.  Smoking guns burn a small amount of wood chips (almost wood dust) and then send that smoke through a tube.  You will need to get a separate smoking dome, and I picked up a simple plastic one from Amazon.

If you don’t want to go with the special equipment, you can use a glass bottle with a medium opening.  Just place the smoking wand into the bottle and fill it with smoke.  Pour in the old fashioned cocktail, give it a quick swirl and then pour it back into an old fashioned glass. In a pinch, you could cover a pint glass with a piece of saran wrap, too – it would accomplish the goal.

There are a number of companies that make smoking guns, but I have the Breville version.  It’s super easy to use!

For a Smoked Old Fashioned, you simply make the drink as normal, and then put it under the smoking dome.  Turn on the smoking gun, and let it fill the dome with smoke.  Now just wait 2-5 minutes (experiment with how long based on your taste preferences).  Pull the dome off, and serve up your drinks.  Cheers!

But does a Smoked Old Fashioned taste smoky?  I personally don’t think so.  You’ll smell the smoke as you go to take a sip, but the drink itself doesn’t taste like you’re licking an ashtray.  (That’s a good thing in my opinion.) The intensity of flavor depends on how long you let the drink sit in the smoke.

What else can you smoke with a smoking gun?  The sky is the limit here!  I had some guys over a few months back, and we tried smoking everything we could find.  Smoked nuts?  Good.  Smoked cheese?  Could be really good, but I think we left the cheese in a little too long.  1 minute tops next time.  Smoked ice cream?  Don’t try it.  Seriously, though, you could smoke anything from cooked meats to desserts.  What about a slice of smoked sour cherry pie?  That sounds amazing, right?

What kind of wood chips do you use?  You’ll want to use wood chips that are designed for smoking guns.  These wood chips are super fine, so they burn quickly.  As far as flavor, that depends on what you’re smoking.  The Breville smoking gun came with apple and hickory chips.  (Jax Smok’in Tinder make a cool 5-flavor variety pack. – aff. link)  I used apple for the Smoked Old Fashioned.  I think mesquite would be better for meats and cheeses, but maybe I’ll have to experiment next time.

For a fun twist, you can skip the wood chips entirely and use pipe tobacco. We recently ordered a smoked old fashioned cocktail at the Quill and Crow in Asheville, NC, and they put a pinch of pipe tobacco in their smoking gun. Different? Yes. I enjoyed it, but my wife thought it was too reminiscent of smoking a cigarette. Give it a try and see what you think, though!

Is a smoking gun dangerous?  Yes, if you consider lighting a candle dangerous.  That’s pretty much what you’re doing.  And the smoke is a cold-smoke rather than a hot smoke like you might have outdoors on a grill or smoker.  That means you actually can smoke cheese (do it!) or ice cream (don’t do it!) without melting it.

All in all, smoking guns are a super fun toy for anyone who likes to cook.  And I assume that if you landed on this blog, then you probably like to cook.  The Smoked Old Fashioned has become one of my go-to cocktails, both at home and when we go out on date nights.  It sounds fancy, but it’s insanely easy to make…and drink.  Plus, it’ll be a great conversation piece for your next party…cheers!

Did you make a Smoked Old Fashioned at home?  Leave a comment with your thoughts below, or snap a photo and tag me on Instagram (@Spicedblog).  I’d love to see your creation! 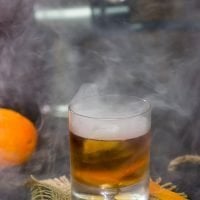 Looking for more fun tequila or whiskey cocktails?  Check out some of these other favorites, too: