This light and fluffy Potato Gnocchi is complemented with a delicious (yet simple!)
Sage Brown Butter Sauce.  Buon appetito! 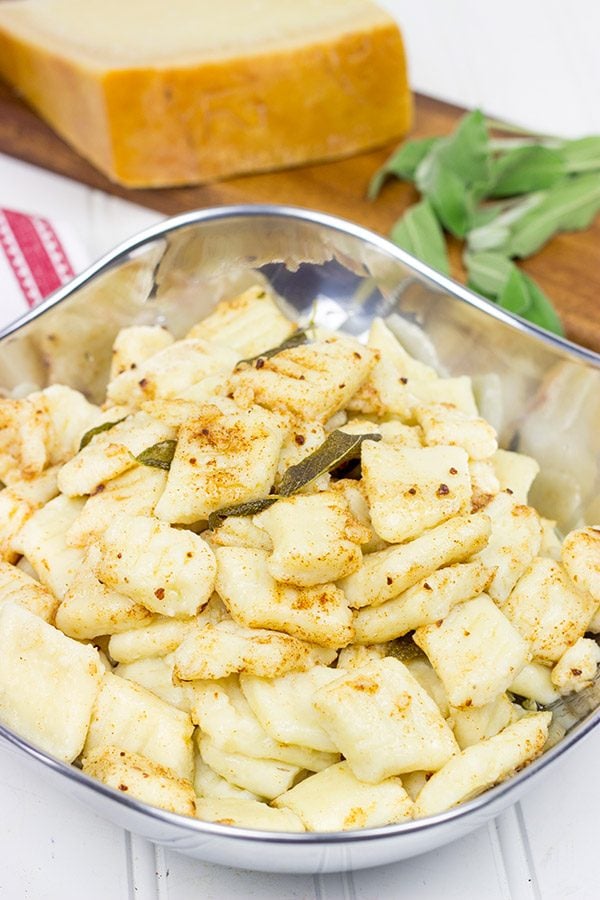 It’s funny how your tastes in food are influenced.  Obviously, you probably take a strong influence from the foods you ate growing up.  But there’s more to it than that.  (Otherwise, I’d be a strictly meat and potatoes kind of guy!)  I had the opportunity to study in Italy one summer while I was in college, and that trip absolutely influenced my foodie tastes.  I mean, c’mon…it’s Italy.  How can you not be influenced by the amazing food in Italy?

We actually didn’t grow up eating Italian food very often in our house.  Sure, we ate spaghetti from time to time, but we never ventured into the world of delicious Italian salami, prosciutto, and provolone piccante.  But then I spent a couple months in Rome, and I adopted a obsession for Italian food.  (Lucky for me, my wife comes from a large Italian family, so there is never a shortage of delicious Italian meats and cheeses whenever we all get together.) 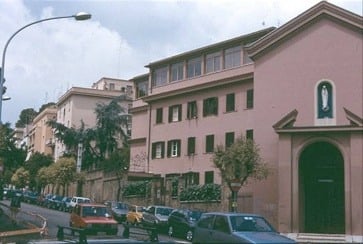 While I was studying in Rome, we lived in a small 4-story building somewhat akin to a dormitory.  The top floors were small rooms where we slept, while the downstairs featured a large commons area and computer room.  And then there was the basement.  An Italian family lived in the building year-round, and they took care of the laundry and cooking.  The kitchen was in the basement, and the Italian feasts that came out of there were nothing short of amazing.  For a guy who grew up on a traditional diet of meat and veggies, I thought I had won the lottery! 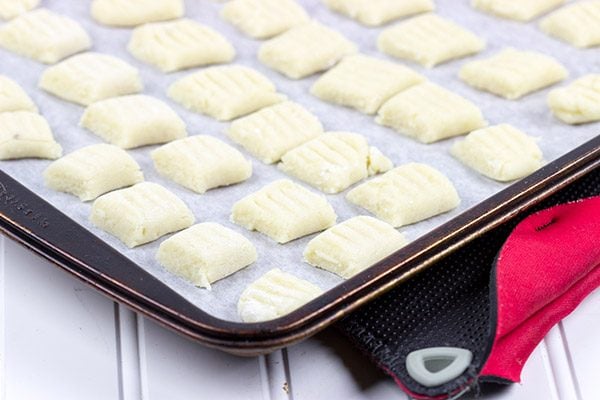 My favorite meal by far was potato gnocchi.  I had never even heard of gnocchi prior to this trip, but it quickly became my meal of choice.  The gnocchi was light and fluffy, and it was often finished in the most amazing sauces.  I’m an inquisitive kind of guy, so I immediately set out to learn how to make potato gnocchi.  I took notes from the husband and wife who cooked for us.  I looked at various cookbooks around Rome.  (Most of them were in Italian, so that didn’t help a whole lot.)  Then when I came back to the States, I began to practice.

Sadly, those initial attempts at making potato gnocchi were mediocre at best.  The gnocchi were dense and lumpy, but I was able to mask that somewhat thanks to the addition of red sauce and cheese.  I came home and made gnocchi with my mother in the kitchen.  She didn’t know exactly what gnocchi should taste like, so the result was a decent (albeit rather heavy) meal.  But I knew.  I knew these weren’t the gnocchi that I had eaten all over Italy.  I was determined to figure it out. 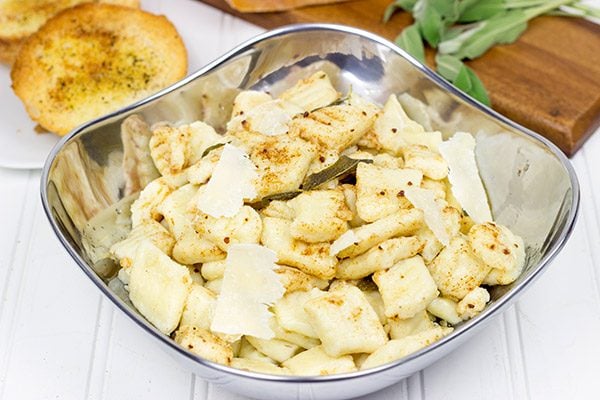 After playing with the recipe proportions a bit, I managed to achieve a somewhat better version of potato gnocchi.  I remember making a huge (like seriously huge) batch of gnocchi for my wife when we first started dating.  I think I sent her home with a whole bunch of leftovers.  She was too nice back then to tell me that my gnocchi still needed some work.  But I knew.  I knew my recipe was close…but it just wasn’t quite there.

Then I finally figured out the key.  It was simple.  It was a food mill.  I had been mashing the potatoes with a potato masher or a countertop mixer.  After all, that’s how I made mashed potatoes.  But I always ended up with little bits of potato in the gnocchi.  In hindsight, this was why my potato gnocchi was too dense.  Fast forward a number of years, and I attempted to make gnocchi again.  I only made some slight tweaks to my recipe, but this time I used a food mill to process the potatoes.  That was it.  I’m not an Italian chef by any means, but I can proudly say that these potato gnocchi rival some of those that I ate in Italy years ago. 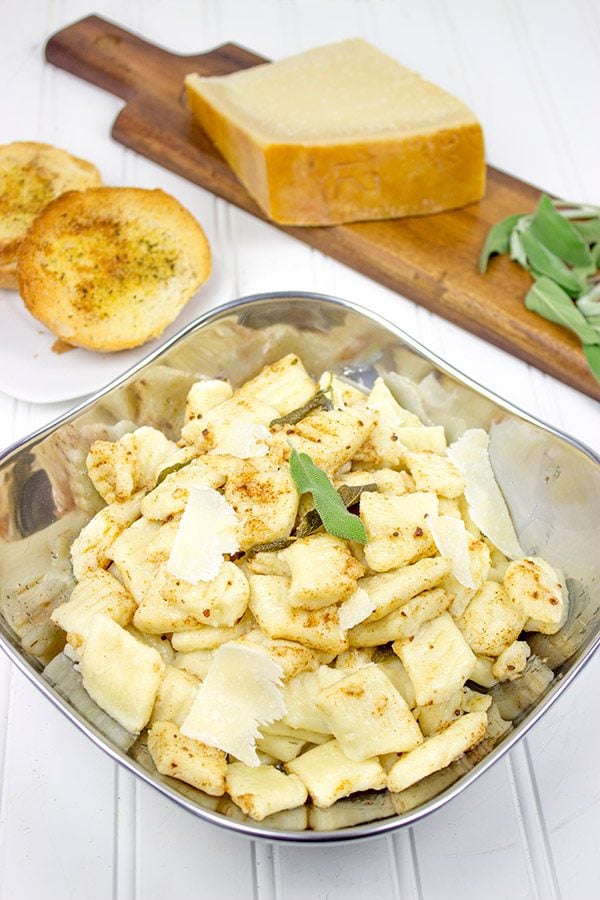 I recently made this Potato Gnocchi with Sage Brown Butter Sauce for dinner.  My wife had the distinct pleasure of eating my gnocchi back before I had finally perfected the recipe, so I think she was a bit wary when I told her what I was making for dinner.  But she went along with it.  One bite later, she looked up and said, “Woah.  This is delicious!”  I had to agree.  And now I foresee many more nights of gnocchi in our future.

I served this Potato Gnocchi with Sage Brown Butter Sauce in this stylish metal bowl from Wilton Armetale.  I’m a huge fan of Wilton Armetale’s serveware as it not only looks classy, but it’s also oven, stove, grill and freezer safe.  Truth be told, I made this gnocchi in the late-afternoon so that I could get these photos before my wife came home.  By the time she got home, the gnocchi was cold.  No worries, though.  I just covered it lightly and put the entire bowl in the oven for a few minutes.  Problem solved! 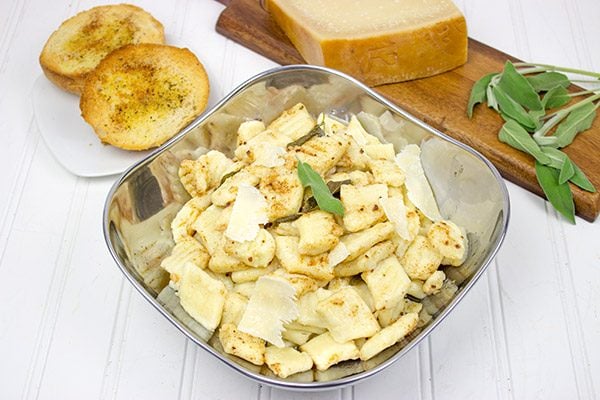 Do you have any Mother’s Day traditions in your house?  Maybe you go out to brunch as a family?  Or perhaps you make her a special dinner that night?  My mother lives down in Nashville now, so I don’t get to see her as often as I would like.  However, I still always send her a gift so that she knows we’re thinking about her.

This year, I’m sending my mother a Wilton Armetale serving platter.  (Mom, if you just read that…sorry to ruin the surprise!)  Not only is the platter functional, but it looks great, too.  In fact, I suspect that she’ll end up keeping the platter out as decoration when it’s not in use.  If you’re looking for an awesome gift for Mother’s Day (or any other occasion), check out Wilton Armetale.  They’ve got a whole bunch of unique gift options over there!

Did you make this Potato Gnocchi at home?  Leave a comment.  Or snap a photo and tag me on Instagram (@Spicedblog)!

Looking for more tasty Italian recipes?  Check out some of these other favorites, too: 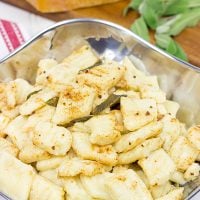 For the Sage Brown Butter Sauce

For the Sage Brown Butter Sauce

You can place cooked gnocchi onto a baking sheet and freeze until hard. Then transfer frozen gnocchi into a freezer bag.

Disclosure: This post was sponsored by Wilton Armetale, but the recipe and opinions are entirely my own.