This Malted Milk Ice Cream is chocolaty, creamy and delicious…and it’s packed with chopped Whoppers!  Grab a bowl and relax! 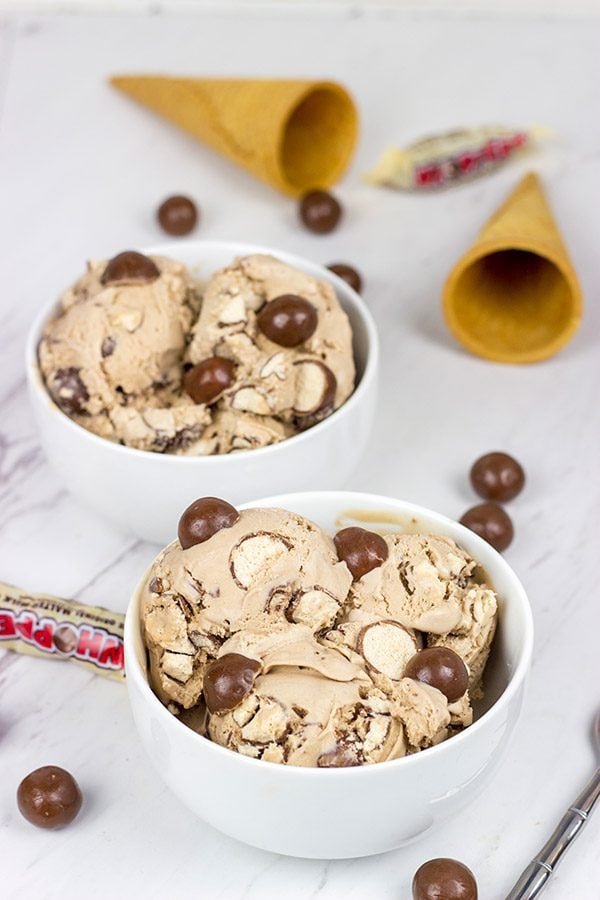 I think the first sign of my age was when we started going to bed around 8:45pm.  Yes, 8:45pm.  But before you judge, hear me out.  Before Robbie was born, Laura and I would go to the gym 3-4 mornings a week.  We’d be at the gym when they opened at 6am.  Then we’d hit the showers at 7am and get off to work.

Once we had a toddler in the house, we couldn’t just head off to the gym anymore.  (We like to work out together as we motivate each other to actually get out of bed.)  So we purchased exercise bikes here at home, and now a corner of our basement storage room has been transformed into a gym.  But in order to work out, shower and then get Robbie up and fed?  The alarm starts beeping at 4:45am.  So that’s my defense of the 8:45pm bedtime.  It’s still 8 hours of sleep.  But, yes, it also still makes me an old man. 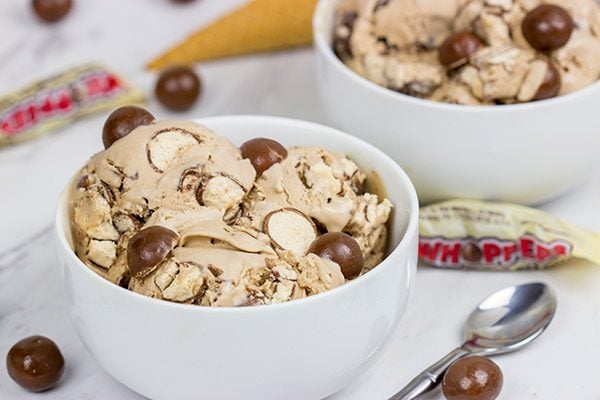 Next sign?  The day I said, “Wow, my hip didn’t hurt like that yesterday.”  I find that I wake up with random leg/back/<insert random muscle here> pains lately.  Some of this I most definitely attribute to curling as I’m on the ice a couple of nights a week.  And some of those games are rather late…which means less sleep on those nights.  That can combine to create random things that hurt, and I occasionally find myself hobbling around.  Thus, old man.

And just last weekend, I caught myself saying, “Eh, I don’t think I need another beer tonight.”  Laura and I often kick back on Friday nights with a couple of beers or a glass of whiskey or wine.  But last weekend, I consciously turned down a second beer.  I was already tired, and I was afraid I’d be too tired the next morning if I stayed up drinking another beer.  Granted, this all happened around 8:30pm…on a Friday night.  Holy moly, I’m old.  Also, I just said holy moly.  That right there is further proof of my age. 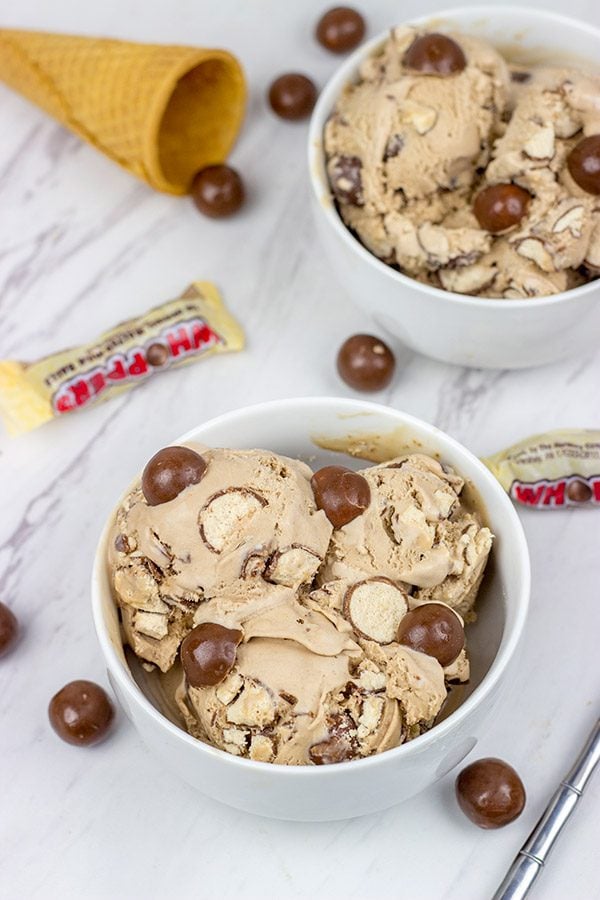 And finally?  Whoppers.  Yes, Whoppers.  Malted milk balls.  My father loves Whoppers, but I never really cared for them when I was a kid.  I preferred more sugary candy.  Like those candy cigarettes.  Do you remember those?  Am I showing my age here?  The drugstore down the street from us in Charleston, SC used to sell candy cigarettes.  They were literally sticks of sugar with a little red dye on the end so that we could pretend to “smoke.”  Seriously? 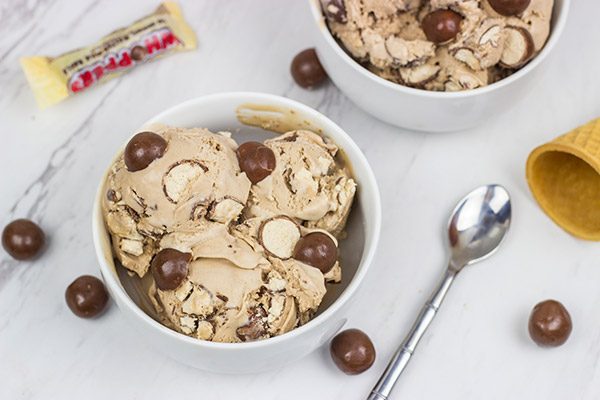 The other day, I bought a bag of mixed candy bars, and it included Whoppers.  The Whoppers got picked over and picked over until they were the only ones left.  I broke down and decided to try Whoppers.  And I kinda liked ’em!  Further proof that I’m getting old as Whoppers used to be reserved for my Dad.  I’ve been wanting to make homemade ice cream lately, so I decided to make some Malted Milk Ice Cream.  And I stirred in a bunch of chopped Whoppers.  And this Malted Milk Ice Cream was delicious! 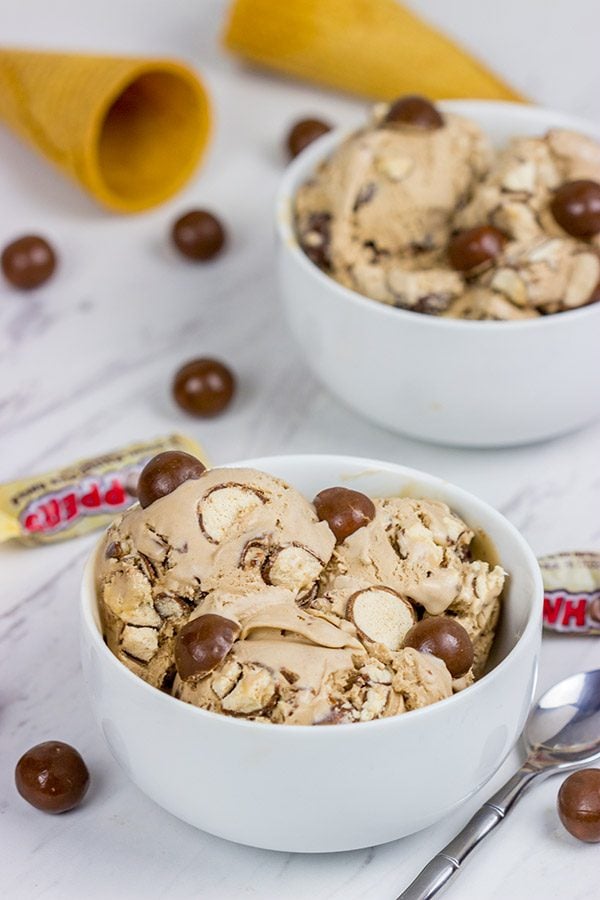 In order to make Malted Milk Ice Cream, you need to fully embrace your age when you go to the store.  Why is that?  Because you need to buy Ovaltine.  Yes, that powdered stuff that Grandma used to drink.  I actually didn’t buy Ovaltine for this Malted Milk Ice Cream because my grocery store sold a different brand.  But it’s the same thing.  Malted milk powder.  It gives the ice cream an undertone of malt, and it’s actually quite delicious.  Heck, maybe I’ll use the leftover powder to start drinking a glass of Ovaltine each morning.  And with that, my status as an old man has been solidified.  But at least I’m an old man happily eating my Malted Milk Ice Cream and Whoppers.  Enjoy, my friends!

Love ice cream?  Try some of these other tasty recipes! 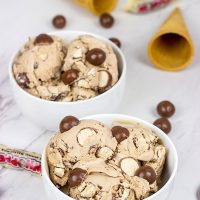