This Ham, Brie and Cranberry Crostini post has been sponsored by Tyson Foods Inc.  All thoughts and opinions are my own.

Looking for a fun way to elevate your holiday appetizers?  These Ham, Brie and Cranberry Crostini are layered with tasty flavors, and they’re a cinch to make! 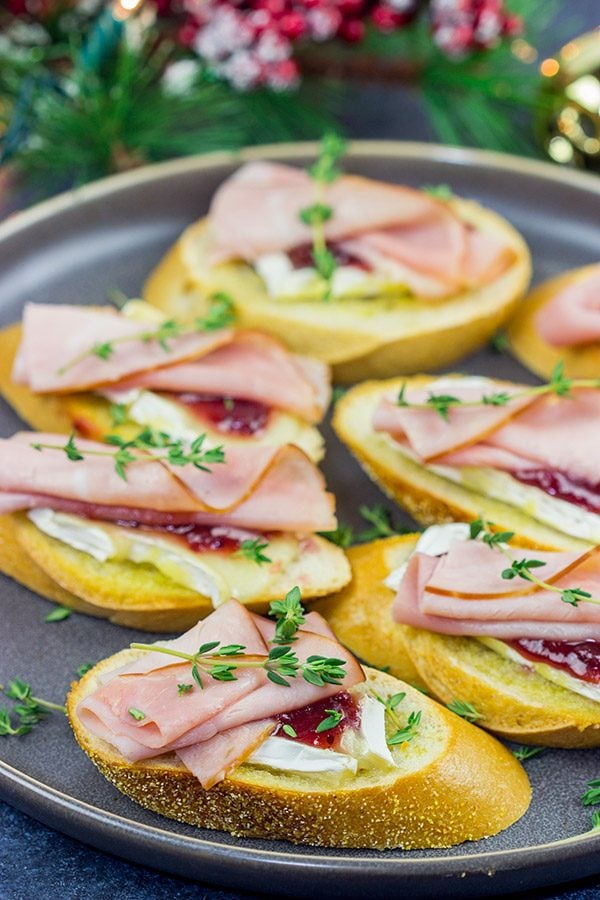 Are you a planner?  Or do you wait until the last minute?  Our local news flashed up a survey the other night that said 40% of people have started their Christmas shopping by October.  Another 40% of folks start in November.  The remaining 20% wait until December, with 3% of the total population waiting until after December 15th to start shopping.  Seriously?  After December 15th?  There is no way I could wait that long to get my Christmas shopping started!

When it comes to shopping, we pick up random gifts throughout the year when something jumps out at us.  For instance, my niece is really into ballerinas, and we found a ballerina nutcracker for her way back in March.  In general, I’d say that November is our go-to month for Christmas shopping.  We make a list (and check it twice!), and then hit the stores or the internet (avoiding those post office lines). 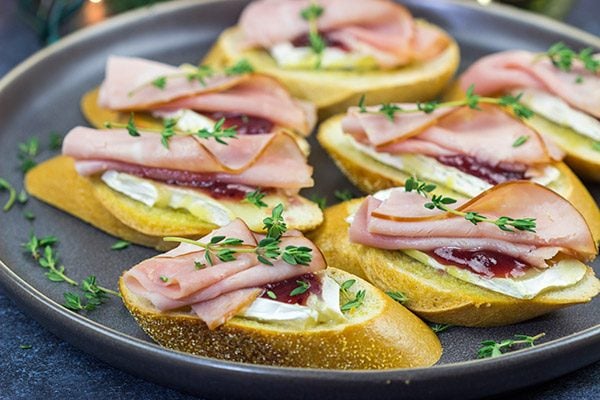 I saw a recent study that the post office will deliver approximately 16 billion pieces of mail during the holiday season.  That’s billion with a “b.”  That’s 16 followed by 9 (!) zeros.  The busiest mail day of the year is December 17 with nearly 3/4 of a billion pieces mailed on that day alone.  That puts Santa’s deliveries to shame!

As astounding as those numbers sound, they kinda make sense.  We mail out several dozen holiday photo cards in addition to a handful of packages to my family in Tennessee and Texas.  And we’re just 1 family.  Multiply that up, and I can see how you’d eventually land on 16 billion pieces of mail.  (Mental note: Make sure to thank my mail lady this year!) 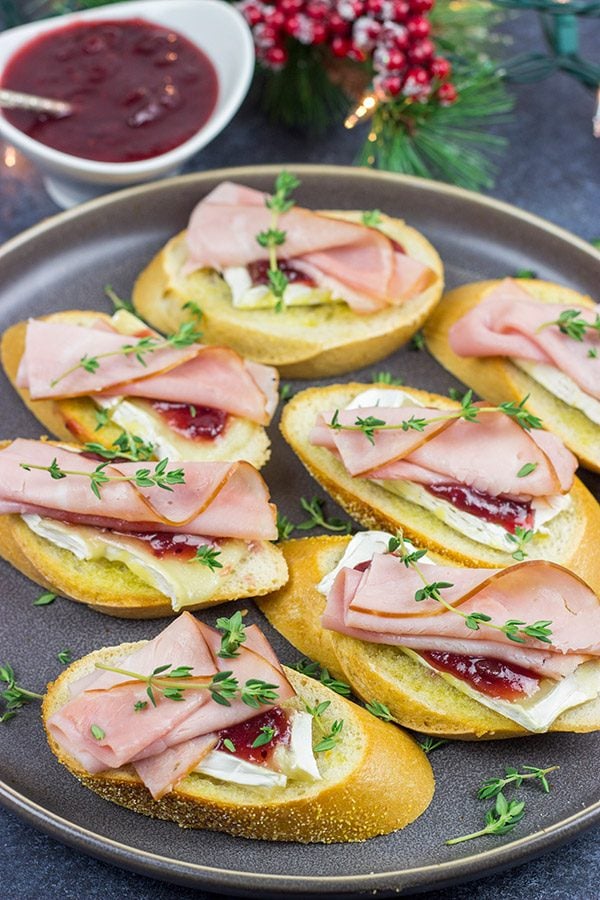 Switching gears over to the food, one of my favorite dinners during the holiday season is actually appetizers.  That’s right.  Appetizers for dinner!  After a long day shopping or standing in line at the post office, there’s nothing better than coming home to an easy meal of appetizers.  Laura and I whipped up a batch of these Ham, Brie and Cranberry Crostini the other night…woah!  There’s so many layers of flavor packed in these small bites. 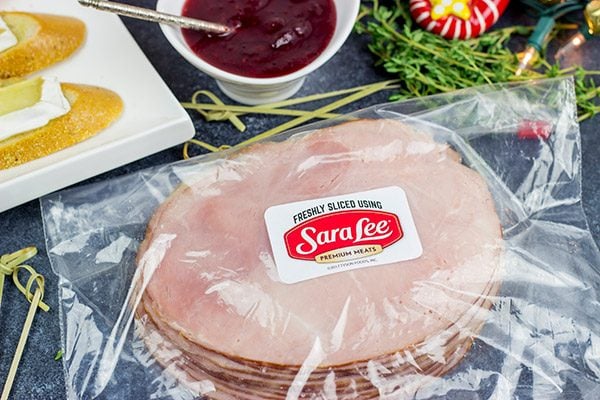 I’ve become a big fan of brie in recent years, so these crostini started with a base of slightly crispy bread and warm brie cheese.  Add a spoonful of cranberry relish and then a slice of Sara Lee® Premium Honey Ham, and you’re well on your way to deliciousness!

On my weekly grocery trips with Robbie, I typically stop by the deli counter and pick up a pound of Smoked Turkey or perhaps Chipotle-Seasoned Chicken Breast for lunch.  Sara Lee® Premium Meats are my go-to for affordable, high-quality deli meat.  Robbie has just gotten interested in sandwiches (no crust on that bread!), and I feel good about serving these high-quality deli meats to him.  Plus, I love mixing up the different flavors each week!  (Click here for a complete list of all Sara Lee® Premium Meats.) 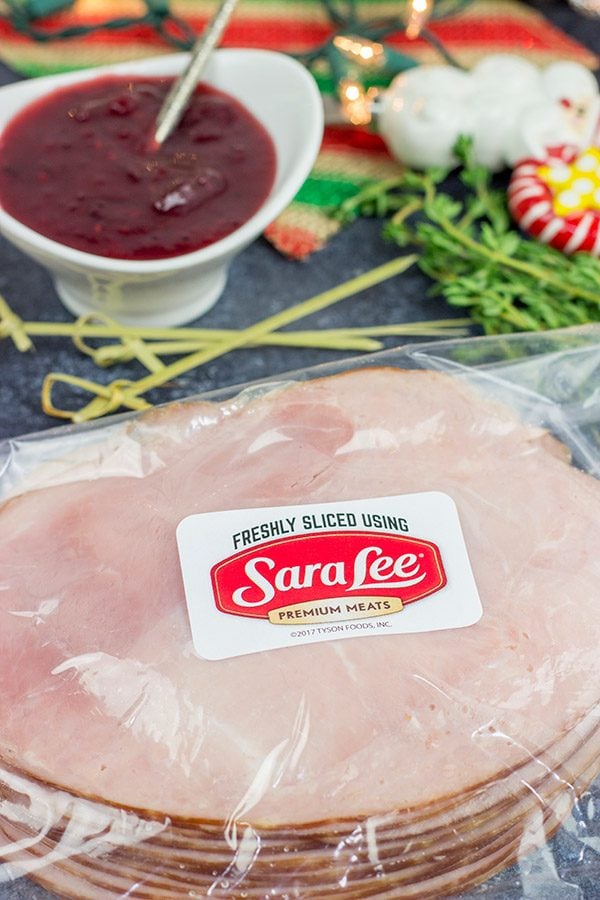 This week, I decided to grab some See Lee Honey Ham, too, as I had this idea for Ham, Brie and Cranberry Crostini floating around in my head.  These crostini came together in minutes, and they made for an excellent easy dinner.

Laura’s parents came up to visit for Thanksgiving this year, and they arrived the evening before.  Since we didn’t know exactly what time they’d arrive due to holiday traffic, we decided to keep dinner pretty easy and flexible that night.  We made another batch of these Ham, Brie and Cranberry Crostini…and I might have nibbled on a few before they pulled into the driveway! 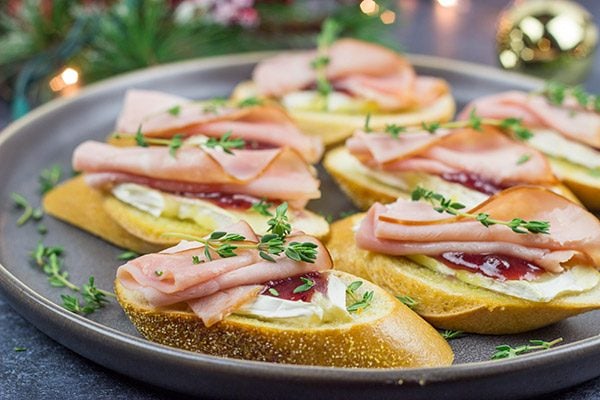 These crostini would also be a great centerpiece for a holiday cocktail party with the neighbors.  We love putting out a simple cheese board along with a couple of appetizers, and then letting folks graze for dinner.  We’ve typically got a fire roaring in the fireplace, and the opportunity to catch up with friends and neighbors over an easy appetizer dinner is always fun!

One of the best things about these crostini is you can tailor the toppings to your favorite flavors.  For instance: 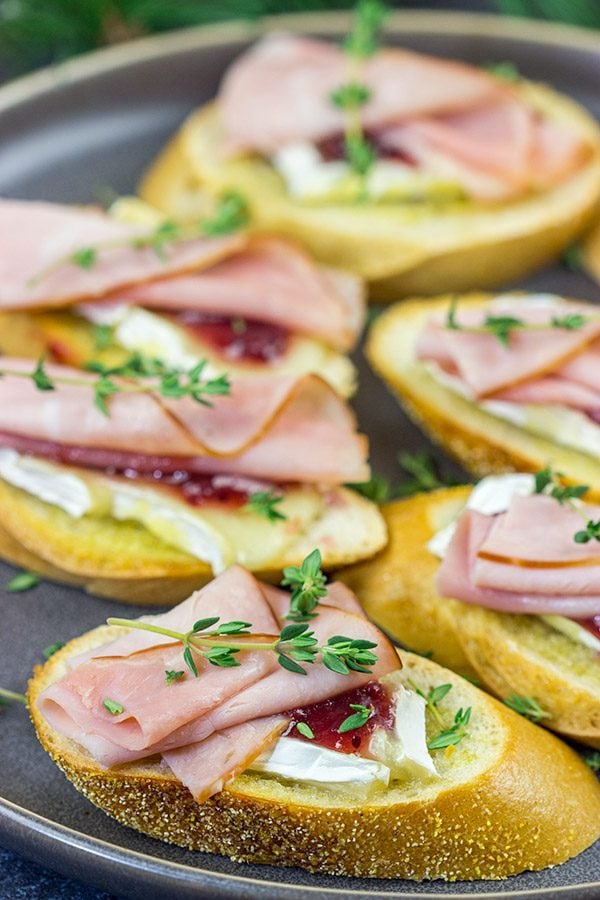 As we head into the busy part of the holiday season, make sure to take some time for yourself!  Make a batch of these Ham, Brie and Cranberry Crostini.  Build a fire in the fireplace.  And, most importantly, relax.  The holidays are one of the best times of the year, so make sure you stop and enjoy the season!  Cheers, friends! 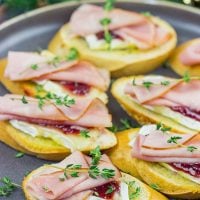 Did you make these Ham, Brie and Cranberry Crostini at home?  Leave a comment!  Or snap a photo and tag me on Instagram (@Spicedblog).

Looking for more holiday appetizer ideas?  Check out these other favorites: