Get into the March Madness spirit with this tasty Chocolate Chip Cookie Cake! 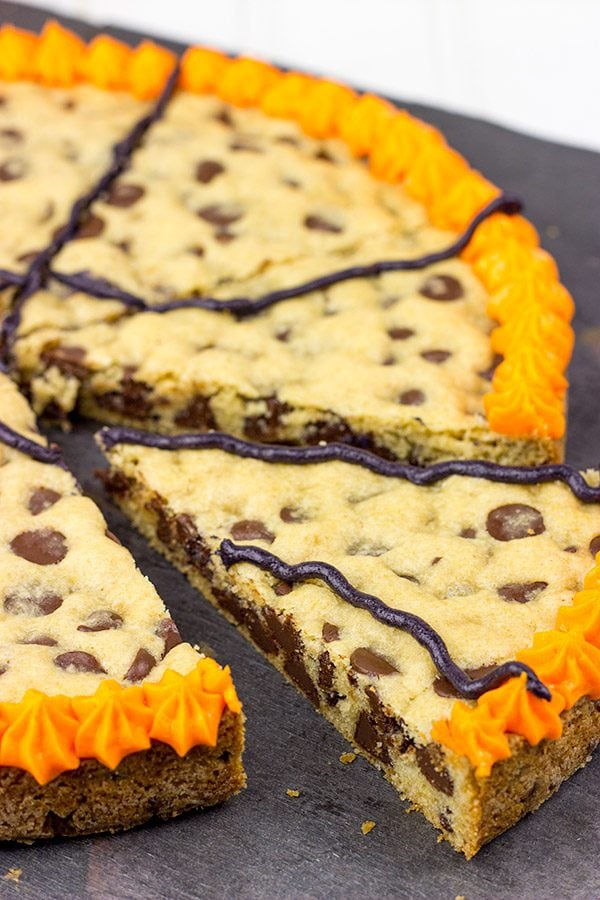 It’s almost tournament time.  The upcoming several weeks rank right up there at the top of the list for my favorite times of the sports year.  You can pretty much turn on the tv any time of the day and find a college basketball tourney game on.  And because these are tournament games, everyone is playing with extra purpose.  Lose, and you’re out.  Win, and you move on.

I fill out a tournament bracket every year.  I can usually make it through the first day or two without sustaining major injuries…but then everything usually falls apart.  The team I predicted to win the whole thing loses in the Second Round.  Or another team I predicted to make the Final Four bows out early.  There’s a reason why Warren Buffett offered $1 billion dollars to anyone who could pick a perfect bracket back in the 2014 tournament.  The odds of picking perfection were 1 in 9.2 quintillion.  In case you’re wondering, no one made it past the first 31 hours of the tournament that year.  Warren’s billion stayed safe under his mattress.  Or wherever else you hide a billion dollars. 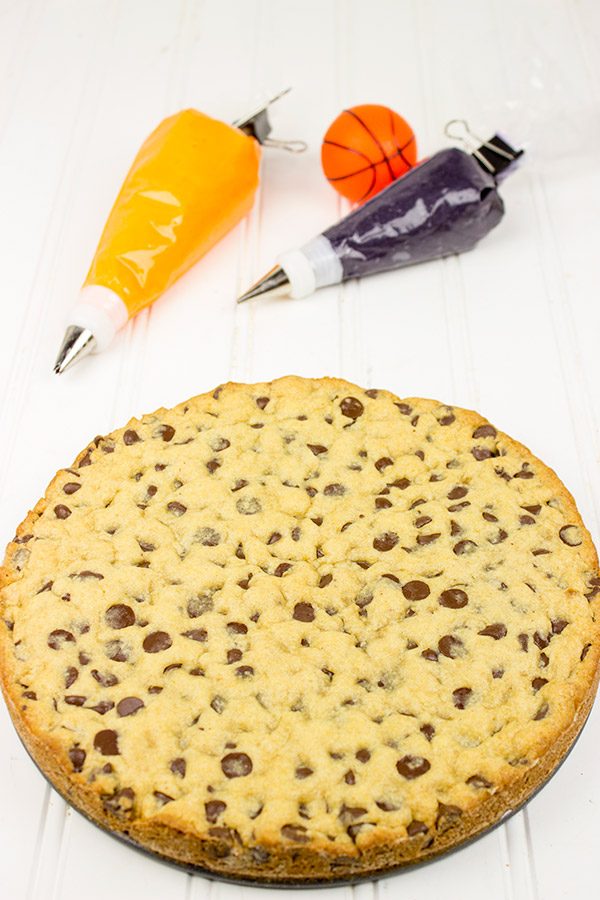 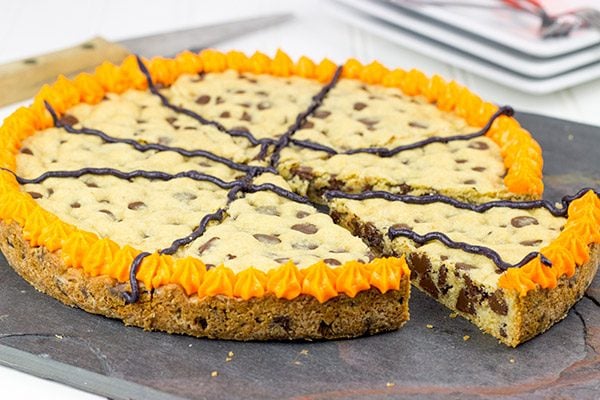 But speaking of team mascots, can we take a moment to celebrate some of the best team names in the country?  There’s the mighty Banana Slugs of UC-Santa Barbara.  And there’s the Idaho Vandals.  What exactly does a vandal do?  Does it inspire fear in their opponents by threatening to break their car windows?

Not to be outdone, there’s the Fighting Artichokes from Scottsdale (AZ) Community College.  (Since community colleges games aren’t usually televised, their athletic budgets are usually small.  But I’m guessing Scottsdale rakes in the money on t-shirt sales for the Fighting ‘Chokes.  Genius move on their part, really.)

Ok, ok, just one more and then I’ll stop.  From the ranks of minor league baseball, my favorite is the Hartford Yard Goats.  Rumor has it that there will be a petting zoo at some of Hartford’s home games this year.  Yes, you can pet a yard goat. 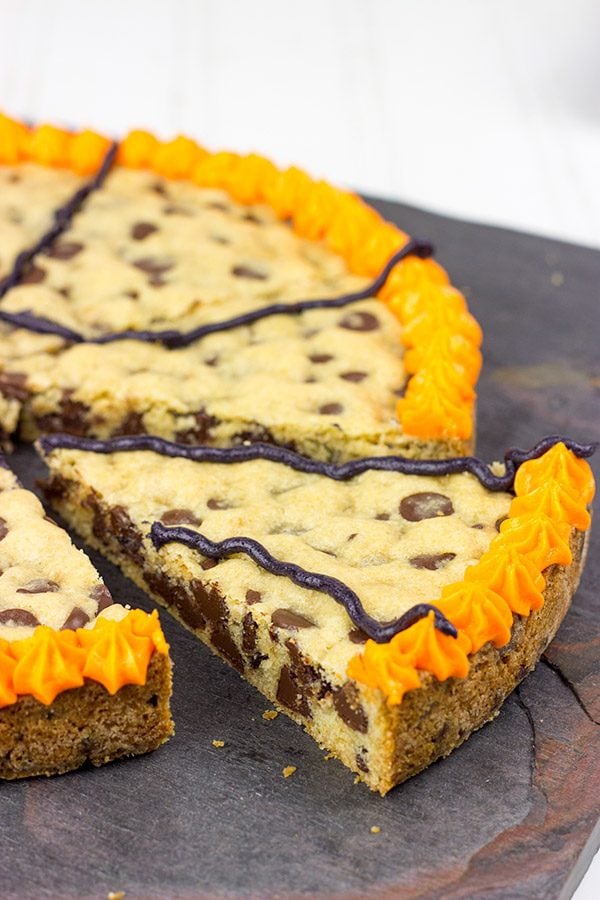 But before we wrap up this talk about college basketball, we have to talk about this Chocolate Chip Cookie Cake.  Truthfully, this cookie cake could make an appearance at all sorts of events.  Birthdays, anniversaries, Super Bowl, Mondays, etc.  But with March Madness right around the corner, I decided to go with a simple basketball decoration here.  No matter what color frosting you use, this Chocolate Chip Cookie Cake is one legit dessert!  Forget braving mall traffic to get a cookie cake…make one at home yourself.  And no matter your team, good luck in this year’s tournament!  I’m off to decide who would win the battle between a yard goat and an artichoke.  (Just kidding, we all know that a yard goat > an artichoke!)

Do you have any other favorite sports mascot names?

What is your favorite occasion for Chocolate Chip Cookie Cake?  (The correct answer is all occasions.) 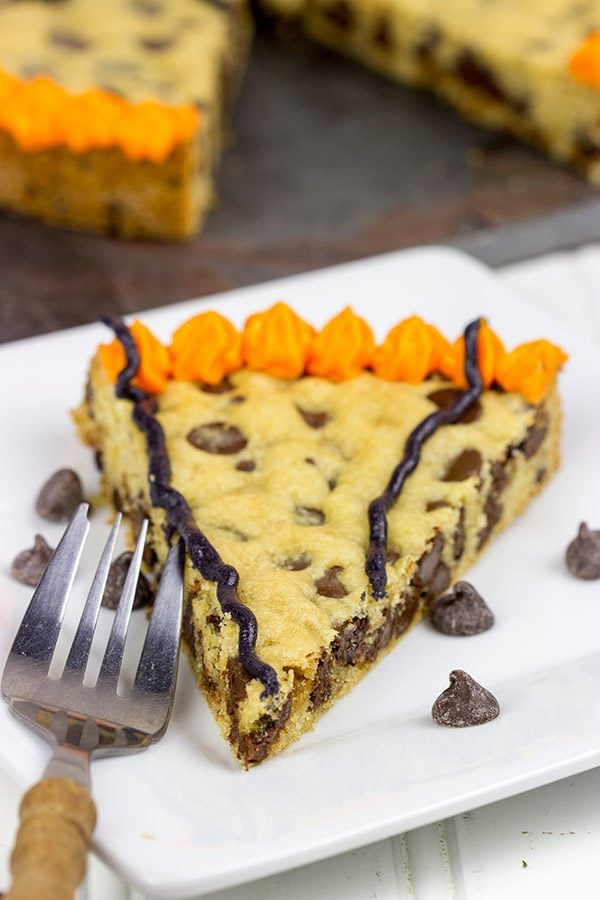 And just one more…because it’s my favorite mascot name of all time.  The mascot for The Arkansas School for the Deaf is the leopards.  Think about that one for a moment. 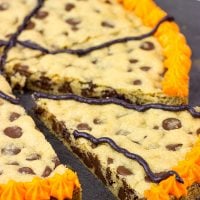