Featuring layers of chocolate cake filled with cherries and fresh whipped cream, the Black Forest Cake is a classic (and delicious) dessert! 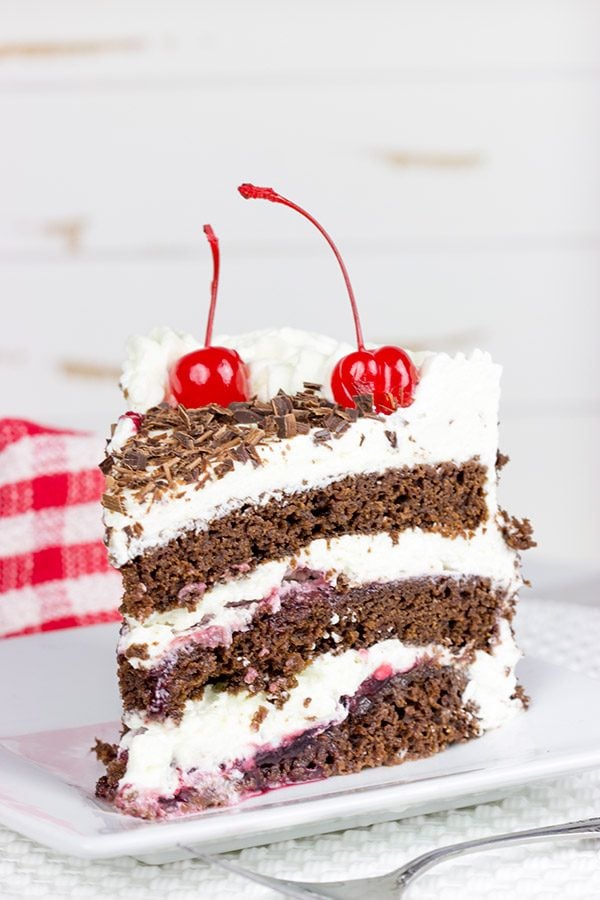 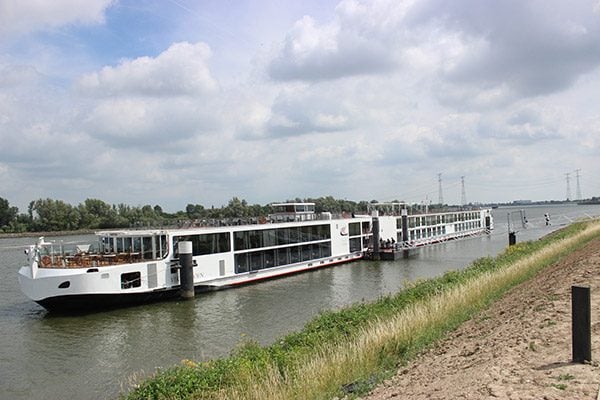 Back at the end of June, Laura and I had the chance to take a Viking River Cruise down the Rhine river.  We traveled with my mother as well as my sister and her husband.  Noticeably missing from that list: Robbie.  We left Robbie at home with Laura’s parents (my sister did the same with her daughter), and we took an adult vacation.  It was the first time we had left Robbie without one of us around, and we were certainly nervous…but he did great!  He loved spending solo time with his Grammy and Pops, and we loved the chance to relax a bit.  (We missed the little guy something fierce, but it was nice to vacation like adults!) 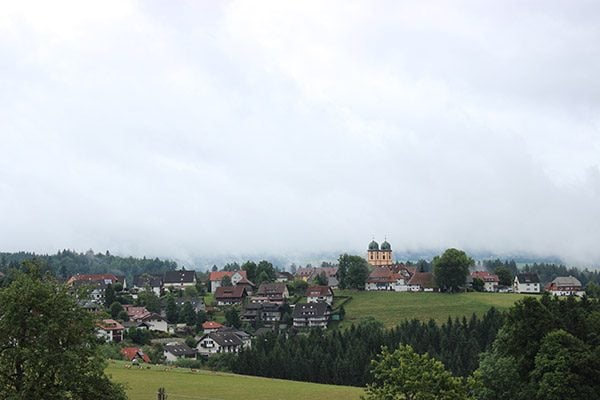 But back to our river cruise.  I’d never been on a cruise before, so I didn’t know what to expect.  Blown away doesn’t even begin to describe that experience!  We sailed from Amsterdam to Basel, Switzerland, and I seriously could take the same trip again.  This was an incredible trip, and I highly recommend it to anyone thinking of doing a river cruise.  We were blown away by the staff and service on the Viking Lofn (our boat was named after the Norse goddess of comfort), and it was great to spend time with my family as we wandered through the Rhine River valley. 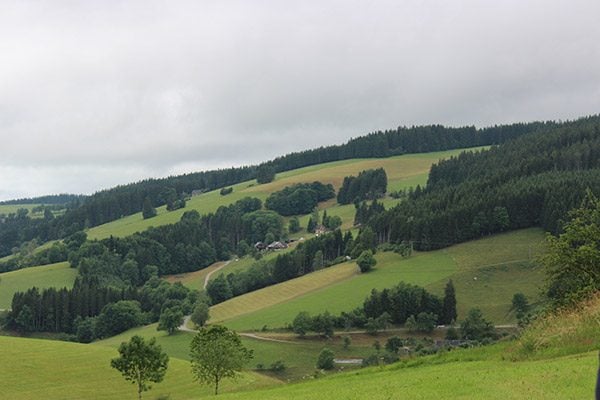 I’ve got a bunch of fun recipes lined up in the coming months featuring different stops along this vacation, and first up is the Black Forest.  (Actually, I’m doing this in backwards order as we visited the Black Forest on our last full day of vacation.  But I really wanted to try my hand at making an authentic Black Forest Cake, so this post got slipped up to the front!)  The Black Forest is a picturesque region of wooded mountains and gorgeous valleys…and it’s also home to cuckoo clocks in addition to Black Forest Cake. 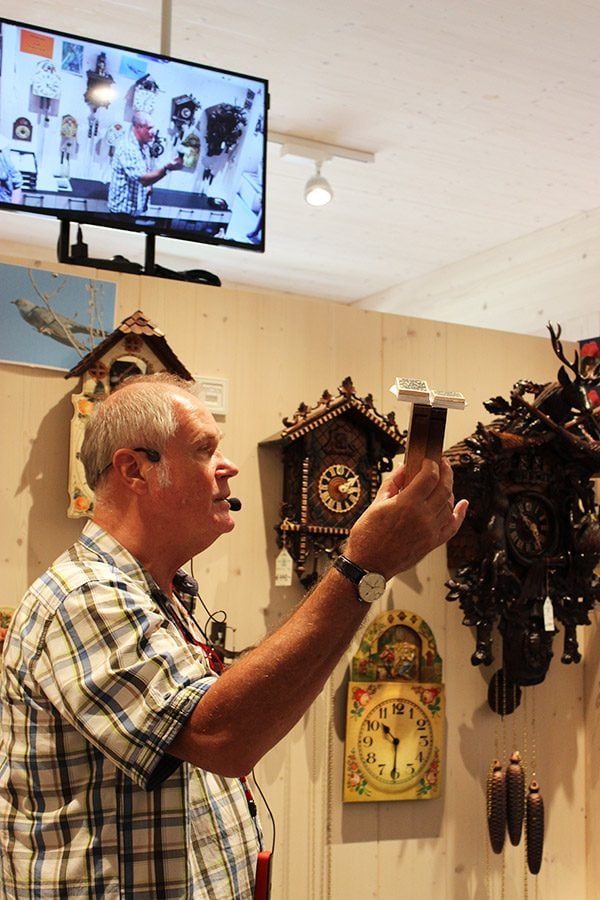 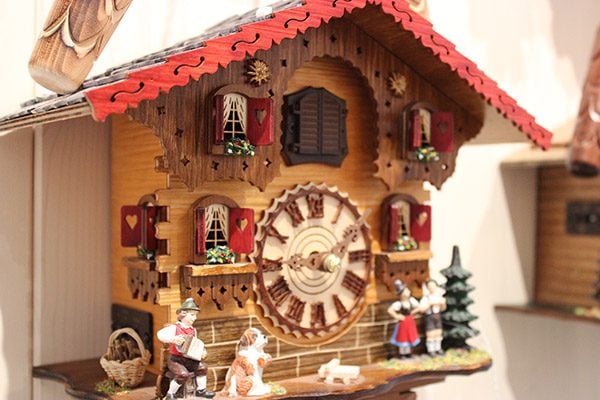 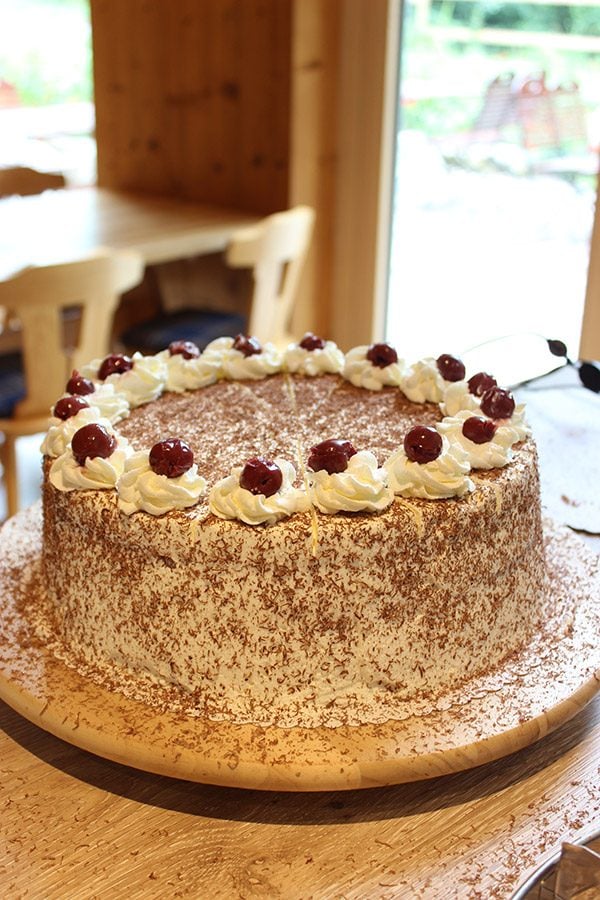 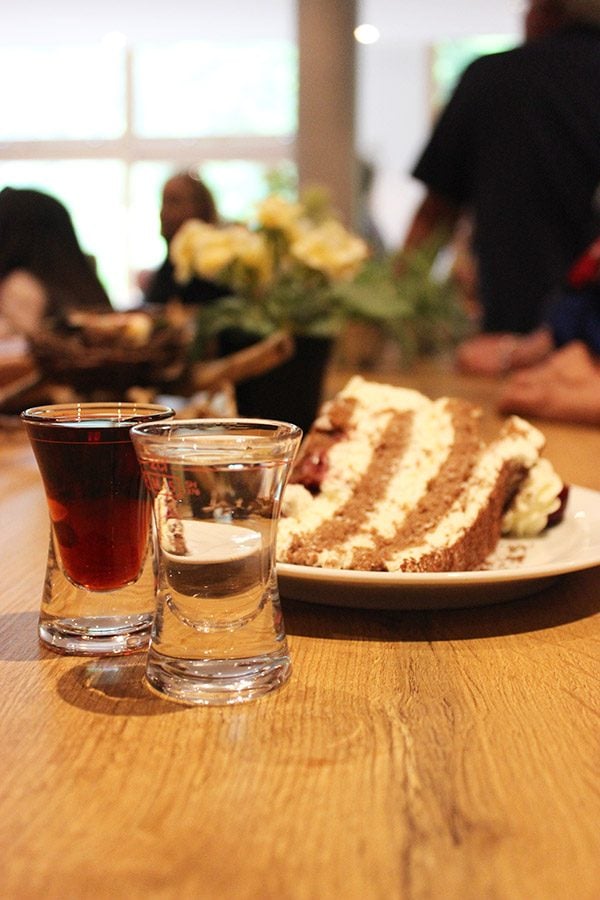 While nibbling on our slice of cake, Laura and I shared a small glass of kirsch.  What exactly is kirsch?  It’s a colorless brandy made from the Morello cherries which are common in this part of Germany.  Unlike other liqueurs, kirsch is not sweet.  In fact, the guy doing the demo of the Black Forest Cake gave us a glass of kirsch and a glass of cherry brandy.  He told us “One is for when you wake up, and the other one is for later.”  We asked which was which, and he just told us “You’ll find out.”  I’m pretty sure the sweet cherry brandy was meant to be the ‘wake-up’ one, although I’m not quite sure.  I’ve since learned that kirsch is typically served ice cold as an after-dinner digestif.  Those crazy Germans with their brandy for breakfast! 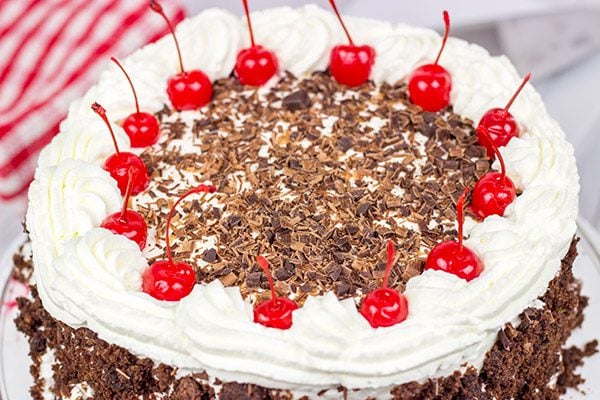 Either way, kirsch is a strong, but unique liqueur.  I’m not sure I’ll be pouring another glass of it anytime soon, but it is an essential component of an authentic Black Forest Cake…so use it!  (Side note: Kirsch, also known as kirschwasser, is fairly easy to find at large liquor stores here in the States.  I found a small bottle in the cordials/mixers section, and it wasn’t too expensive at all.)  And, yes, the tiny amount of kirsch in the cherry filling absolutely lends a noticeable flavor in the finished version of the cake.  It’s not there just for show!  (If you’re worried about the alcohol, I’m guessing it all boils out as you make the cherry filling.) 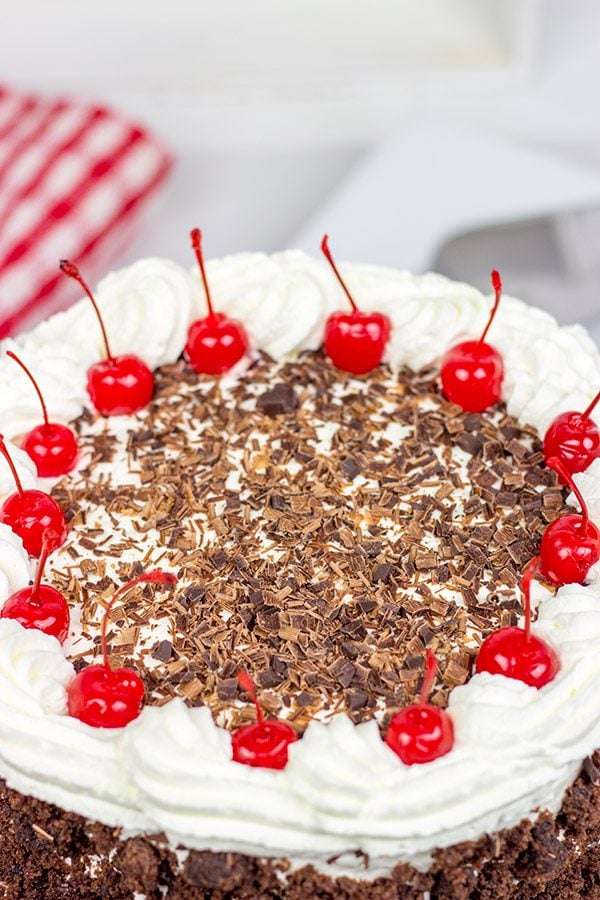 But finally, the cake itself.  Black Forest Cake features a mixture of cherries and whipped cream sandwiched between layers of chocolate cake.  The recipe below is directly from Hofgut Sternen, but I’ve included a couple of baking notes from my first attempt at making this cake here at home.  Most noticeably, most of the cherry filling should go on the bottom layer of cake.  If you put too much weight on the upper layers of cake, it will push the filling from the bottom layer out.  Then you’ll have a mess on your hands.  I speak from experience here.  (This Black Forest Cake almost became a Black Forest Trifle, but I managed to salvage it!) 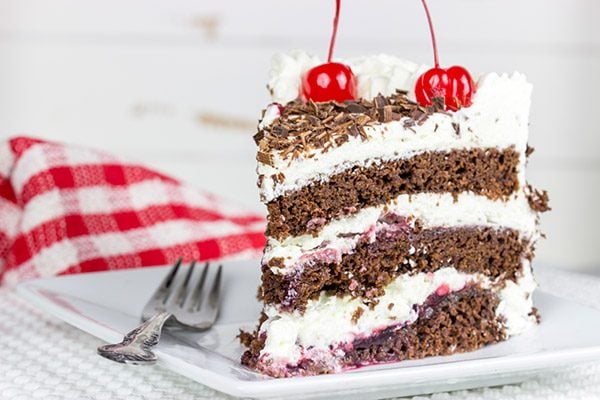 If you’re looking for a fun dessert, then this Black Forest Cake should go on your list!  It’s chocolate.  And cherries.  And whipped cream.  How can you go wrong there?  And if you ever get the chance to visit the Black Forest region in southwestern Germany, do it! 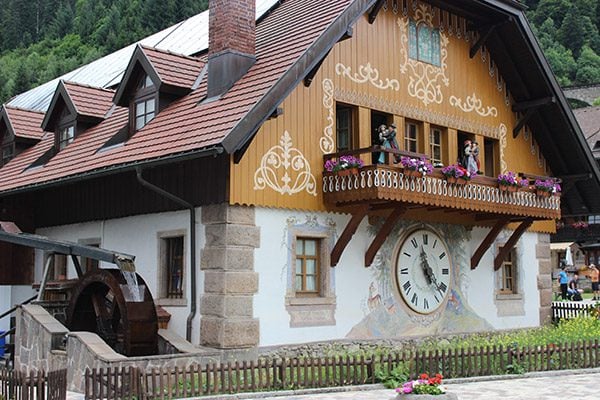 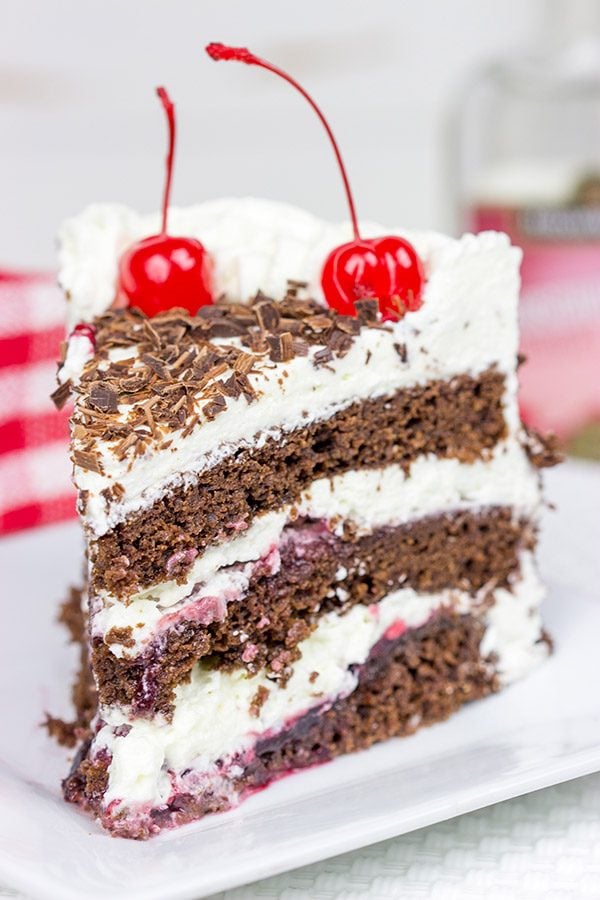 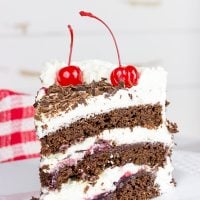 Recipe from Hofgut Sternen: the Black Forest Village. I couldn’t find canned sour cherries (only cherry pie filling which is not the same), so I used a 24-oz. bag of frozen cherries (thawed). Kirschwasser (also called kirsch) is a fruit brandy made from fermented cherries. It was originally created in the Black Forest region of Germany, and it is a key component of a traditional Black Forest Cake. I recommend only using half of the cherry filling in the cake. Using all of the cherry filling will make the cake difficult to slice. I also recommend using most of the cherry filling on top of the bottom layer of cake. The weight of the filling on the upper layers of cake will make this cake difficult to slice. (This was a tip shared directly from the baker that we talked to at Hofgut Sternen.) Use the extra filling as a topping for ice cream…or just eat it plain! In order to prevent the whipped cream from melting, ensure that both the cake and the cherry filling are totally cool. I actually placed mine in the refrigerator for about 30 minutes to make sure the cake and filling were cold.