This Black Forest Brownie Pie features a chocolate crust filled with a decadent chocolate and cherry brownie filling!  And don’t forget to serve it with a scoop of vanilla ice cream! 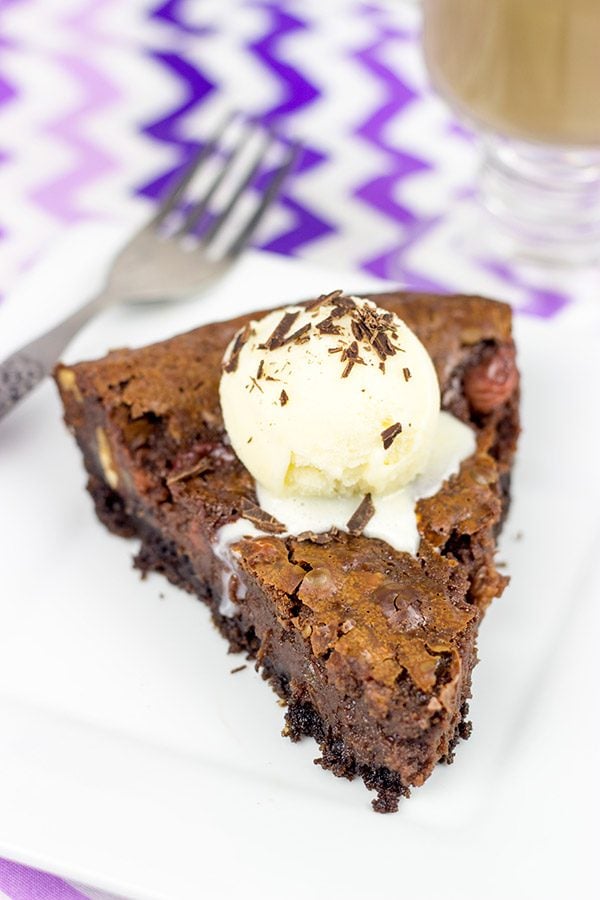 Before I met my wife, I’d never really eaten sour cherries.  I don’t recall ever seeing sour cherries in our fridge when I was a kid, and they just weren’t really on my radar.  (I did eat my share of cherry flavored candy…but that’s not quite the same.)  But now I love fresh sour cherries!  Whenever cherries show up in the market each year, I always grab a ton of them.  Truthfully, I do find them a bit of a pain to eat due to the pit…but I’ll gladly put up with that mild inconvenience since they taste so amazing. 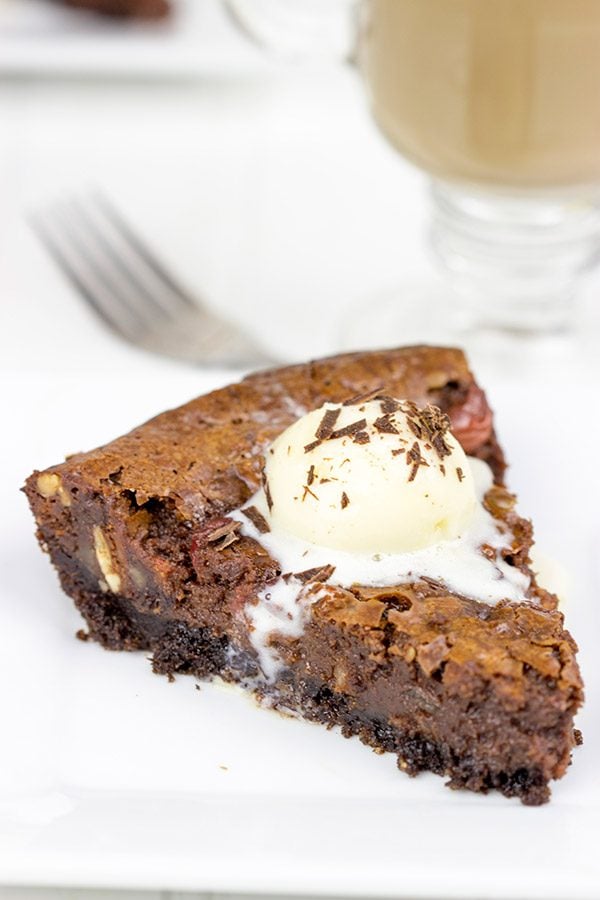 Every July 4th for the past few years, we drive down to a farm about 45 minutes south of here and pick our own cherries and blueberries.  I’m not sure why we always go on July 4th other than the fact that it’s a vacation day and we’re both off of work.  Either way, the blueberry bushes and cherry trees are loaded with fresh berries, and we seriously stock up.  I’m talking like 10+ pounds of berries.  We’ll leave some out to eat, but then we freeze the rest in quart-sized bags.  Then we have berries for the rest of the year.  In fact, I just used the final bag from last year’s cherry harvest for this Black Forest Brownie Pie. 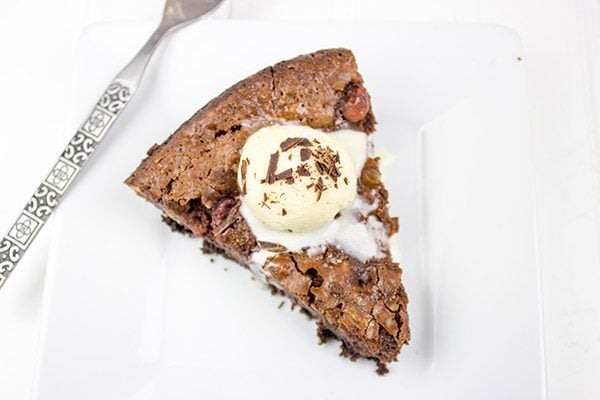 When we first moved into our house about 4 years ago, we planted several fruit trees in the backyard.  I’ve always wanted to grow my own fruit trees!  For the last several years, we’ve been picking off all of the buds when they form in the spring.  This makes the tree send its energy into growing taller and stronger rather than producing fruit.

I’m not gonna lie.  Picking off all of the buds made me cry a little bit each year.  I knew it was for a good reason, but plucking those little flowers each spring was just not fun.  Not this year, though!  The trees are big enough now that we’re letting them grow fruit.  (We did get one rogue apple last fall…and that was pretty awesome.)  I suspect the birds will eat all of the cherries before they ever ripen, but it’s still pretty cool to have a cherry tree in the backyard! 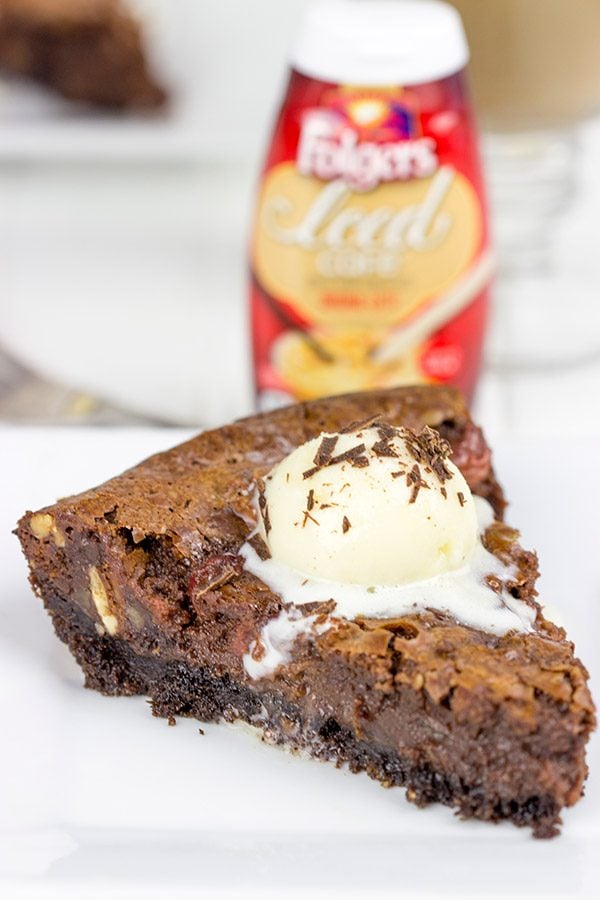 We went down to visit my aunt and uncle in Texas this past spring, and my aunt made the most amazing brownie pie ever.  (I might have scarfed down two slices because we were on vacation.  There are no rules when you’re on vacation!)  Not that the pie needed anything else, but my wife suggested adding some sour cherries.  I took it one step further and added a chocolate graham cracker crust just because I love using graham cracker crusts for pies.  The result was this Black Forest Brownie Pie.  Since we aren’t currently on vacation, I somehow managed to limit myself to one slice of this pie.  But it was a difficult challenge.

Funny enough, I actually prefer this pie cold.  I took a tiny bite of one of these slices right after I took the pictures, and it was tasty.  But our neighbors had invited us over for pizza and beers, so I just tossed the pie in the fridge before I left.  When I got back, I had another bite of cold Black Forest Brownie Pie…and it was delicious! 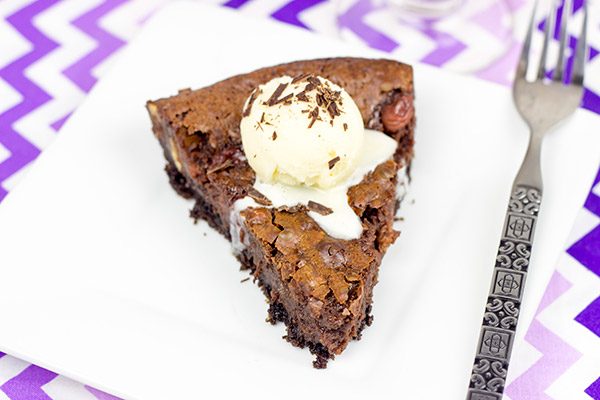 We’ll be heading out to our favorite farm in a few weeks to pick more sour cherries…and I think another Black Forest Cherry Pie will definitely be in order for the afternoon of July 4th!

Cheers, friends!  Oh, and if you make these brownies at home, come back and share your thoughts.  Or just snap a photo and tag me on Instagram (@Spicedblog).

Love brownies?  Check out some of these other favorites, too! 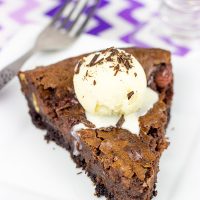 For the Chocolate Graham Cracker Crust

Note: I used a deep pie dish for this pie. If your pie dish isn't as deep, then you might have a little bit of extra brownie filling. If that happens, then just toss the extra batter in a ramekin and bake it up as a little snack for the baker. 🙂