These Angel Biscuits are so light and fluffy that you’ll swear they came from a can! 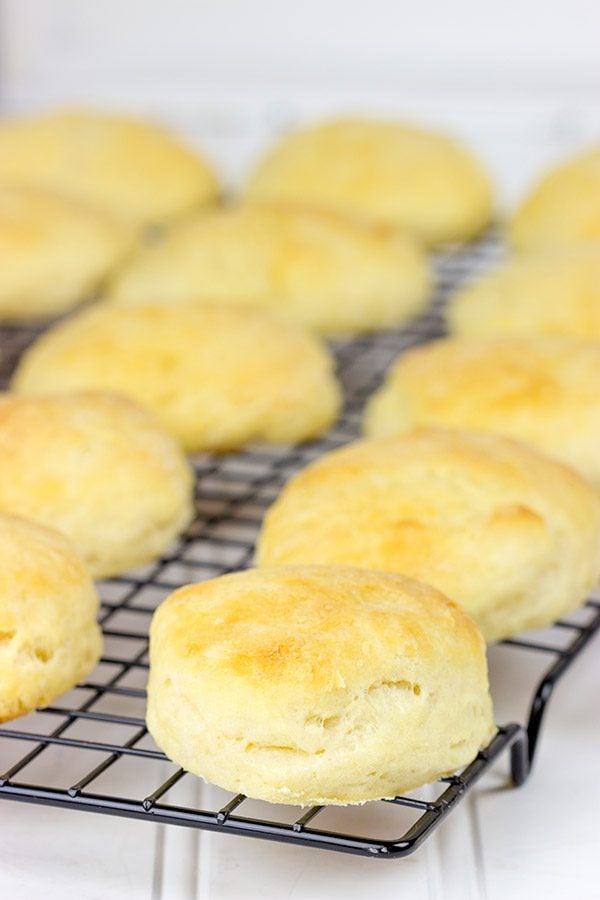 Looking back on my childhood summers, I was lucky enough to live within driving distance of one of my grandmothers.  I’ve mentioned her in the past, but I have some seriously fond memories of those road-trips from Charleston, SC up to upstate South Carolina.  (Ok, maybe the memories are more about spending time with grandma and grandpa than the actual roadtrip…but you get my point.)  They lived 4 hours away, and we would go up there at least several times a year to spend a long weekend.

When I was just 8 years old, Charleston took a direct hit from Hurricane Hugo.  We’d only lived in downtown Charleston for a couple of years, and this was our first experience with a hurricane.  I’ll tell the story some other time, but I’ll leave it at our house was flooded with 3 feet of water, mud and general swampy muck.  (We found a flounder in our bathroom.)  Two days later, my grandparents came down and picked up me, my sister and Dog Charlie.  I can only imagine how hard those times were for my parents, and they certainly didn’t need an 8-year-old and a 4-year-old getting in the way.  Instead, we piled into their old Buick, and rode back up to upstate South Carolina as “Hugo Refugees.” 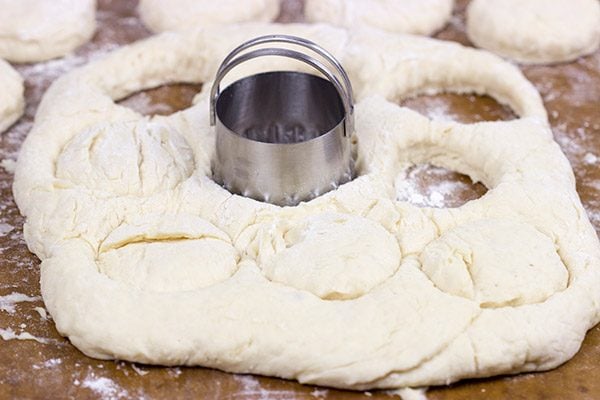 I nicknamed my grandmother “Sweet,” and the title was well-earned.  She was one heck of an accomplished baker.  Be it peach cobblers, cakes or cookies, she always had some sort of delicious treat waiting in the kitchen for us!  But one of my favorite memories was waking up early to get a headstart on all of the day’s fun activities.  I was a strange kid.  I woke up around 5am with a gusto to start playing, reading or generally causing some sort of ruckus.  (Thinking back, I have no idea how my poor parents dealt with me.  Wait.  Yes I do.  It was called Powdered Sugar Doughnuts.) 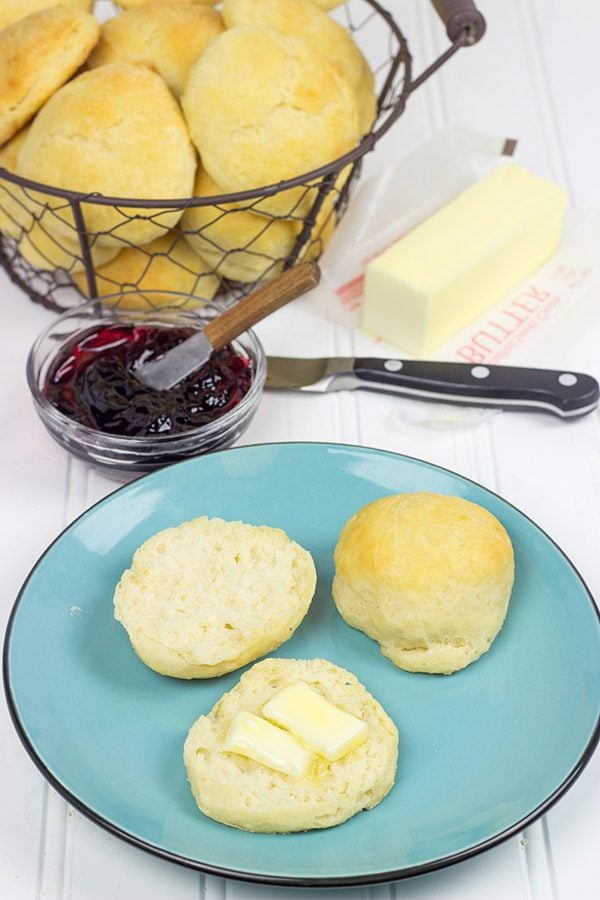 When we were at Sweet’s house, she always woke up before us.  I’d roll out of bed at 5am, and she was already in the kitchen drinking coffee and making biscuits.  At the time, I just assumed she liked to get up early.  I now suspect that she was setting her alarm and getting up early to entertain my sister and me while my parents got some much needed sleep.  Either way, I got to get up early and eat biscuits with grandma every single morning, and that totally rocked!

As any Southern baker can attest, it’s important to have a couple good biscuit recipes in your repertoire of baking skills.  I was recently looking through some of my grandmother’s old recipes, and I came across her recipe for Angel Biscuits.  I was immediately whisked back to those childhood days when I woke up early and had grandma’s full attention all to myself.  (Another plus of waking up early was that I didn’t need to split grandma time with my bratty sister!) 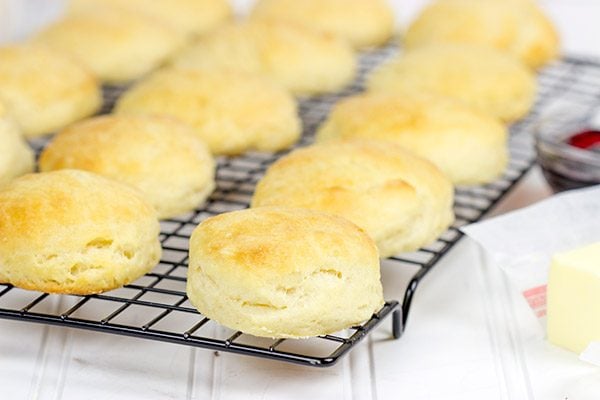 Truthfully, I don’t use vegetable shortening very often when I’m baking or cooking.  I prefer to go with butter instead.  But my grandmother always made Angel Biscuits with shortening.  (I’d like to play around with this recipe next time and try using butter or half-butter, half-shortening…but that’s for another time.)  This time, I wanted to recreate the biscuits that my grandma used to make many years ago.  I pulled out her recipe and hit the kitchen.  And I gotta say…the biscuits were just as I remembered!  I seriously think I could remember the smell of her house while I was making these biscuits…isn’t that odd?

Angel Biscuits take their name from the fact that they are light and fluffy.  They do involve yeast, but do not fear my yeast-adverse friends!  These biscuits require very little rising time.  The result is a light and fluffy biscuit that you will absolutely swear came from one of those refrigerated cans of biscuit dough.  This recipe makes ~18 biscuits, and if you aren’t careful, you could probably eat most of those while they are still warm from the oven.  Don’t say I didn’t warn you! 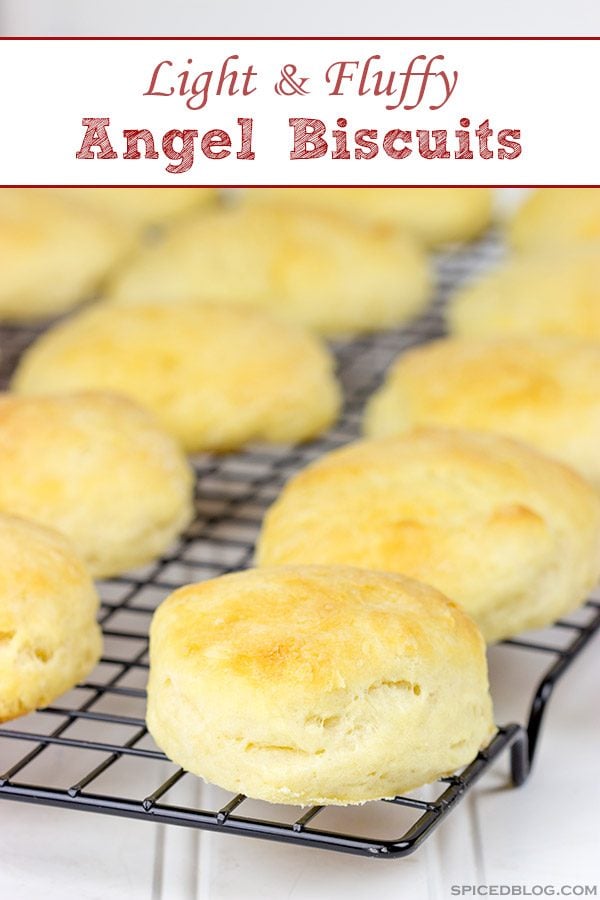 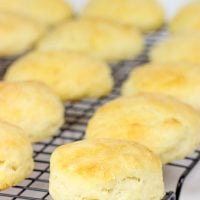