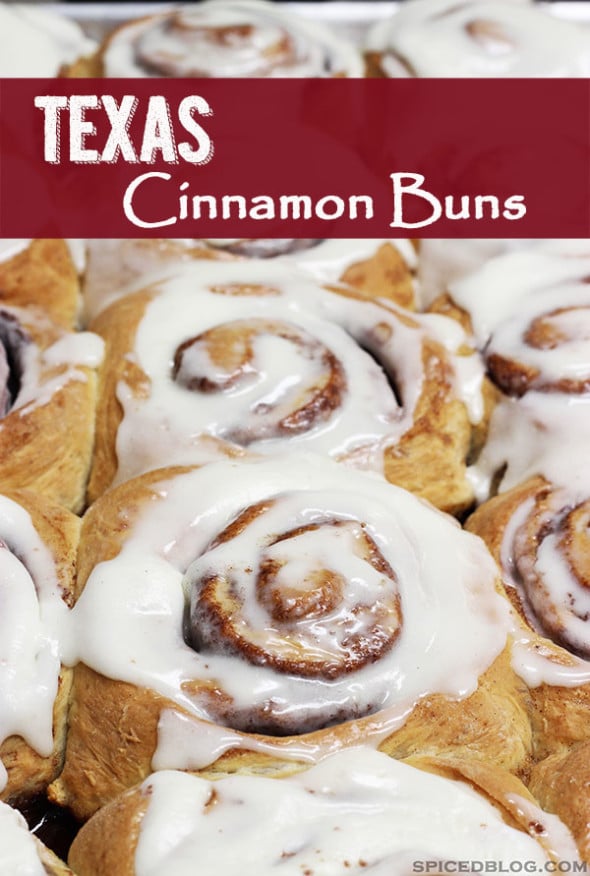 I’m a Southern boy.  I was born in Texas and grew up in the Carolinas.  Then I spent several years in both Louisiana and Georgia.  So what am I doing living in upstate New York?  Just kidding!  My wife and I have been up here for about 2.5 years now, and we’ve had a blast exploring the area.  From afternoon outings at the Saratoga Race Track to weekend adventures through Vermont, the Northeast certainly has plenty to explore. 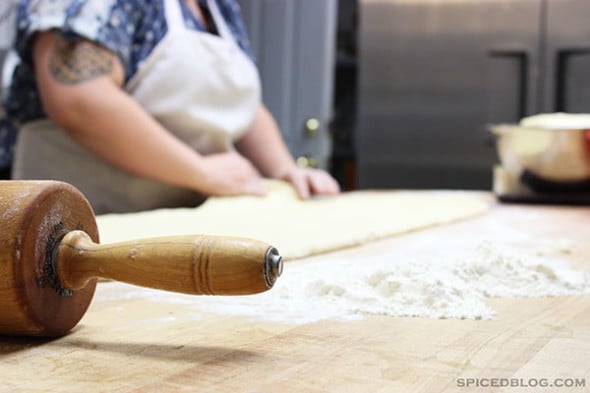 But often we get so caught up planning a vacation that we forget that some of the best things are right under our noses!  For example, a friend just recently opened a bakery in the village of Round Lake, NY.  Now I’ve been in plenty of bakeries in my time, some very good and some very bad.  Leah’s Cakery absolutely lands in the top tier of my bakery list.  (Which is good since it’s only about 5 minutes from my house!)  Round Lake Village is small.  Really small.  I’m talking like a population of 627.  As other communities grew and expanded over time, somehow this little village maintained that quintessential charm that can be found in so many small towns.  In fact, I believe Leah’s Cakery is just one of two businesses in the entire town! 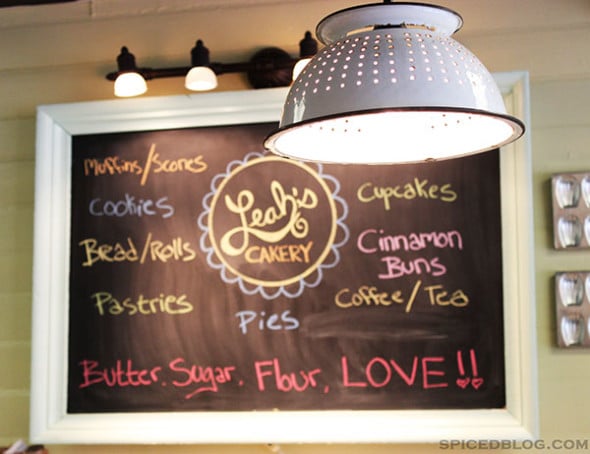 Once a general store, Leah purchased and renovated the bakery space largely by herself and with the help of friends.  And keeping with the history of the place, she decorated the space in a rustic style.  For example, she used old flour sacks in place of cupboard doors.  And she turned old metal colanders into hanging lights.  This bakery certainly has the home-town, comfortable feel…and I haven’t even gotten to her specialty baked goods, yet!  One of my absolute favorite treats from Leah’s is her cinnamon buns, which I have nicknamed Texas-sized Cinnamon Buns…mainly because they are almost the size of Texas! 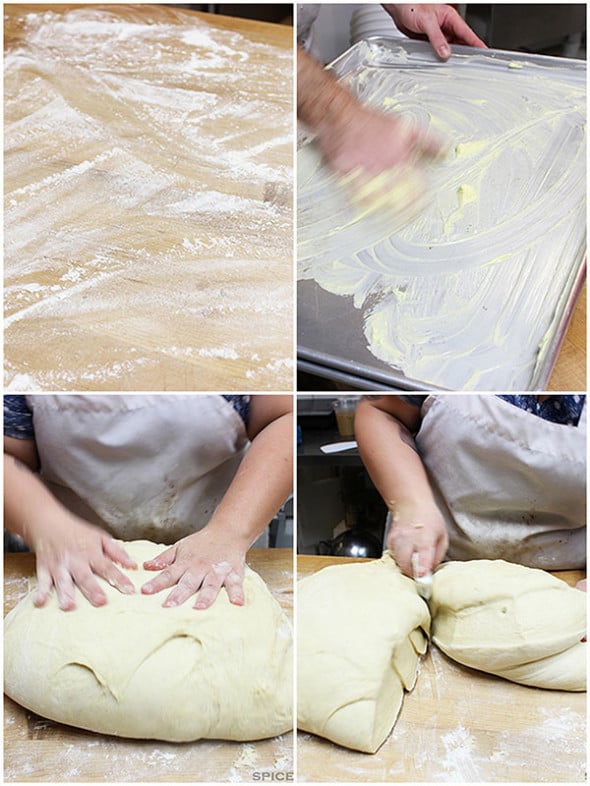 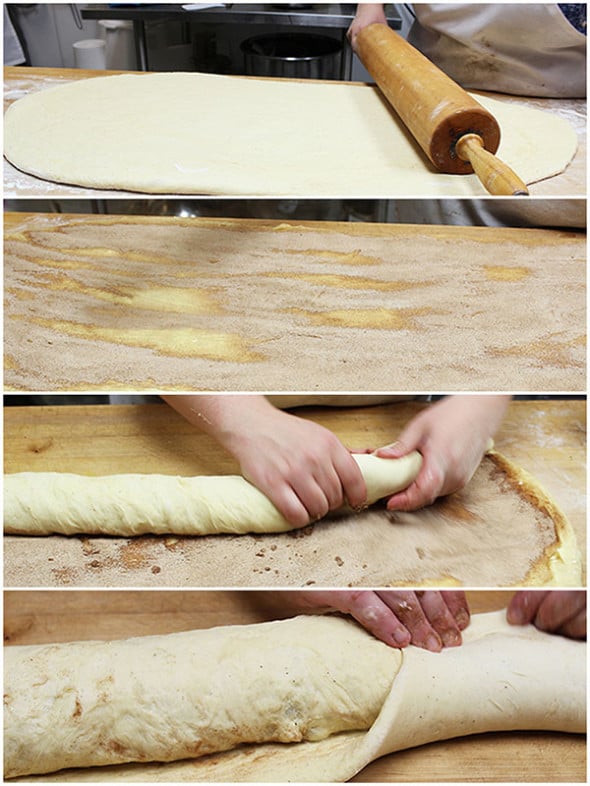 Don’t forget to fill the dough with cinnamon before rolling it!

Cinnamon buns have long been one of my favorite breakfast treats.  I think I’ve eaten enough cinnamon buns in my life to earn the title “bun-connoisseur.”  (Hah…if only that were a real title!)  These Texas-sized Cinnamon Buns from Leah’s Cakery are incredible!  In fact, I told my wife a couple of weeks ago that they might very well be the best cinnamon bun I’ve ever eaten.  They’re that good.  But it gets better!  Leah was kinda enough to invite me into her bakery to photograph the behind-the-scenes cinnamon bun magic…and she even let me share the recipe.  (Leah makes 48 of these buns every day, but this version of the recipe has been scaled back to make 6.  You don’t really want 48 Texas-sized Cinnamon Buns in your kitchen, do you?  Ok, nevermind.  Don’t answer that.  Just multiple this recipe by 8, and you’re good to go.) 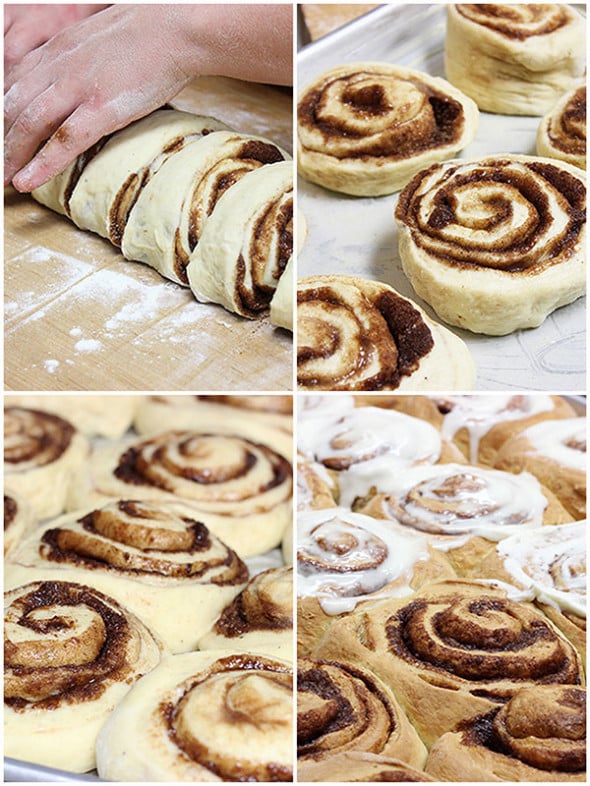 So now that Fall is right around the corner and it’s time to turn our attention to Fall baking, keep these Texas-sized Cinnamon Buns at the top of your list!  And if you happen to live near upstate New York (or if you travel near here on vacation), then put a stop at Leah’s Cakery in Round Lake, NY on your itinerary.  But don’t order the last cinnamon roll…that’s reserved for me!

Part of this recipe can be made 1 day in advance. In Step 7, after placing the buns on the pan, simply cover and refrigerate overnight. The next morning, allow the dough to rest (lightly covered) in a warm location (like an 80-85 degree oven) for about 1 hour, or until doubled in size. Proceed with Step 8.