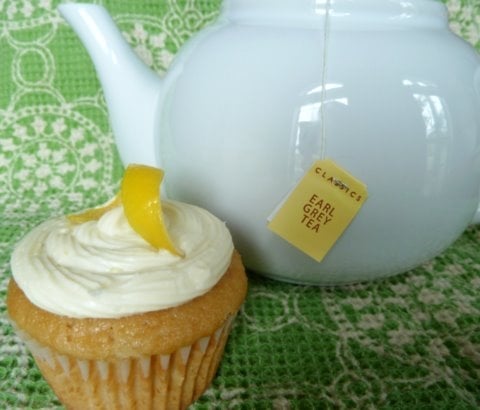 The last few days have been pretty cold. Winter finally decided to show up in mid-February. I find there is nothing better on a cold afternoon than a nice cup of Earl Grey Tea, except maybe an Earl Grey Cupcake with Honey-Lemon Cream Cheese Frosting. Yummy!

The flavor isn’t really what you expect when you bite into a cupcake. At first, you don’t really taste the tea, you just smell the wonderful flower and orange notes from the earl grey. And when you add the honey-lemon cream cheese frosting… You. Get. Pure. Heaven. I could literally drink this frosting with a straw, seriously!

And they are so easy to make. With a full-time job and 2 kids under 4, time is at a premium. I used a box cake mix, but as far as I’m concerned, you would never know it wasn’t “homemade”.

Pre-heat oven to boxes instructions. Replace water with milk according to cake box instructions (the box I used called for 1-1/4 cups water). Heat milk on stove until just under boiling, and place four tea bags in to steep. Set aside until cooled, stirring occasionally.

While milk is cooling, place cake mix into a large bowl. Add eggs and oil as indicated by cake box instructions, and pour in milk mixture. Beat on low for 1 minute, and medium speed for 2 minutes.

Fill cupcake pan with cupcake liners and pour in batter.

Bake according to directions. Mine took 20 minutes. Place cupcakes on cooling rack.

Frost your cupcakes, and voila… perfection!

And here are some of my favorite tea-infused cupcake recipes from around the web:

Some people, like Paula Deen, use a different tea-infusing method. Instead of steeping the tea in milk or water, this recipe uses tea-infused butter, which entails heating the butter with loose tea leaves, and then pouring the mixture through a fine sieve. Apparently, it creates a stronger tea flavor. I haven’t tried this technique because the milk method has worked just fine for me, but I may be giving it a try!

On a side note, When I was looking online this weekend, I came across these cute little  tea-cup shaped silicone baking cups by TeaCupCakes™. Imagine using them for a little girls “tea” party, a baby shower, or even a Sunday morning brunch. So many possibilities!