Loaded with fresh summer raspberries, this Raspberry Crumble Bread can be served for breakfast or dessert…or both! 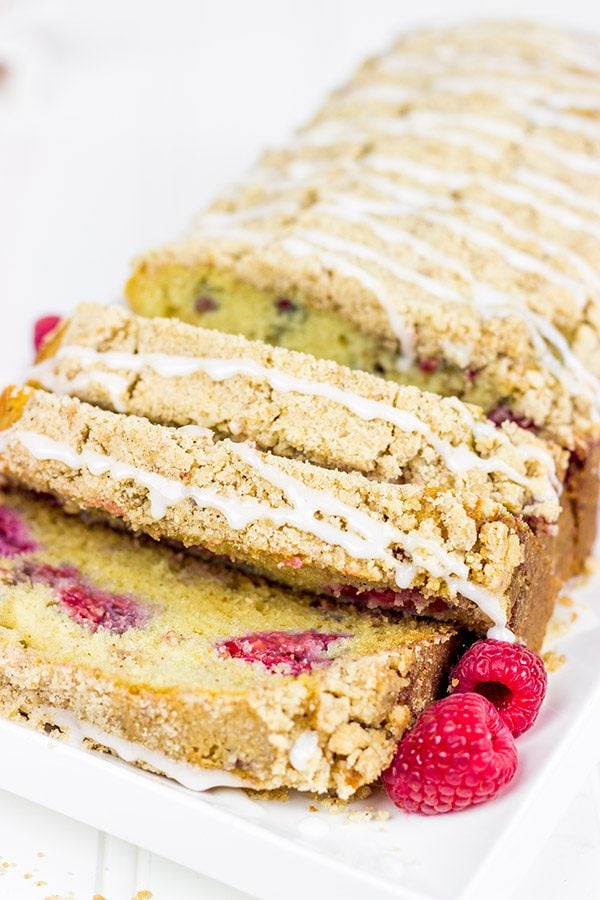 Raspberries are my wife’s favorite berry.  Hands down.  No questions asked.  She goes straight for the raspberries whenever they show up in our fridge.  So when we moved into our house several years back, one of the first things we did was plant several raspberry bushes along the back fence.  We went to a local nursery and did our proper research.  We planted one variety of raspberry that produces fruit in mid-summer and another that fruits in the Fall.  We figured that would lead to having plenty of berries during the warmer months. 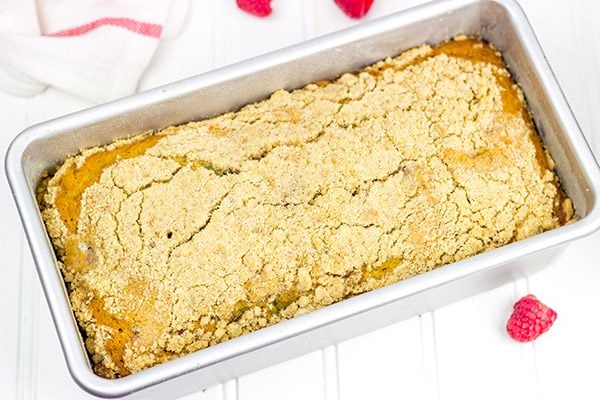 And we figured right.  I think we kinda got lucky with the sunlight and soil conditions, but man have those raspberry bushes grown!  They’ve extended all the way down the fence and out into the yard.  In fact, I was having a hard time mowing that corner of the yard for fear that I would run over the raspberries.  (I ended up putting up some wires earlier this year to keep the bushes pinned back along the fence.) 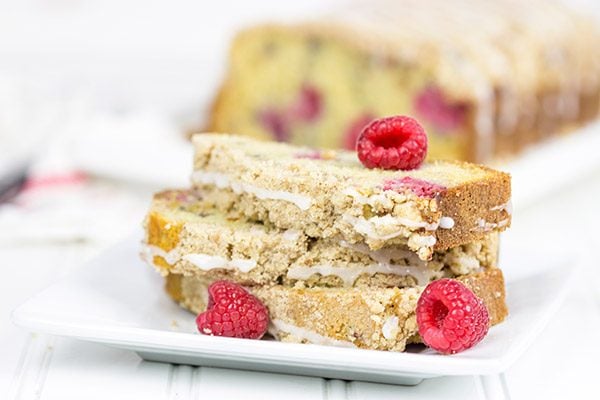 The other day, I had to go back behind our fence, and I found a whole ton of rogue raspberry bushes back there.  It appears that our plants have been busy sending off little friends.  In fact, the raspberries are starting to invade the blueberry bushes’ territory.  That, my friends, is not good.  We could have an all out fruit war in our backyard.  Blueberries vs. raspberries.  With the blackberries sitting off to the side waiting to see which side to jump in on.  Haha.  I kid.  But I am serious that our raspberry bush situation is getting a little crazy.  (We have two types of raspberries planted, and we are currently in between the two types.  Most of the early berries are long gone, but the plants are loaded with buds for the later variety.) 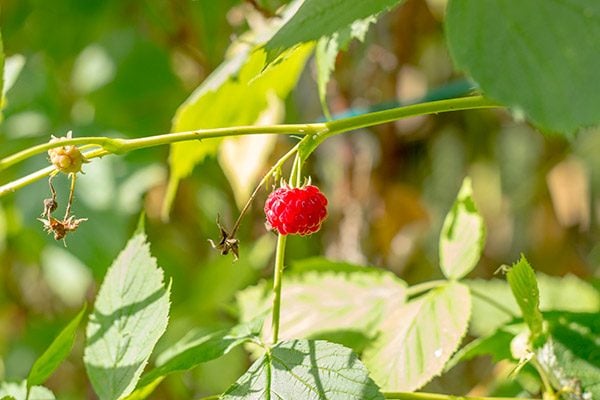 Most afternoons, we just wander out to our little garden in the corner of the yard when my wife gets home from work.  We pick whatever veggies are fresh for dinner that night, and then we head over and scarf down a bunch of raspberries right off the bushes.  But we’ve ended up with more raspberries than I know what to do with this summer.  I have plans for a batch of jam, but first I decided to do what any normal person would do when they are hit with a dumptruck load of raspberries.  I baked them into a tasty quick bread!

This Raspberry Crumble Bread is quick, easy and packed with summer flavor!  Fat Daddio’s just redesigned their bread pans, and I used one of these new bread pans for this project.  As I’ve mentioned in other posts, Fat Daddio’s professional-quality bakeware is made from anodized aluminum.  That means it heats faster and cools quicker, and it’s free from chemical coatings that could peel and flake into your food.  No one wants a slice of Raspberry Crumble Bread with chemical flakes in it, right?  (On a side note, I was excited to see that Fat Daddio’s new bread pans are temperature rated up to 550°F.  That means they’ll be perfect for baking loaves of yeasted bread this Fall.  Stay tuned…I suspect I’ll have some fun breads coming up soon!) 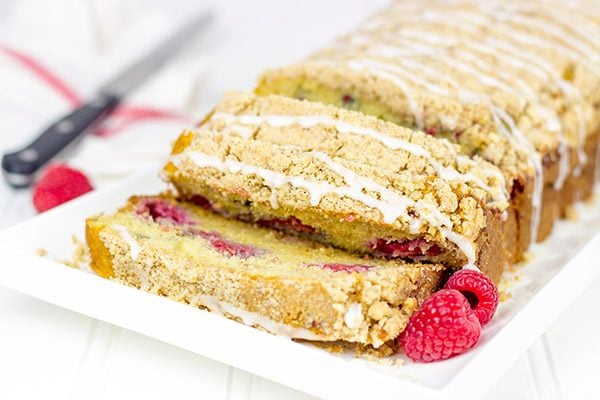 I try to avoid doing a lot of baking in the summer since the oven makes the kitchen so darned hot, but this Raspberry Crumble Bread is an exception.  Plus, what else would I do with all of those raspberries?  (If those bushes keep growing at this rate, I might just have to open a bakery out of my kitchen.  Raspberry Crumble Bread anyone?)

Did you bake a loaf of this Raspberry Crumble Bread at home?  Leave a comment.  Or snap a photo and tag me on Instagram (@Spicedblog).  Cheers

Looking for more tasty dessert breads?  Check out these other favorites: 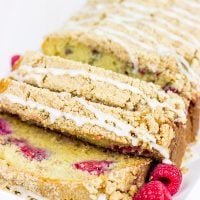 Note: Some baking powders contain aluminum compounds. In this case, you might notice that the baking powder will react with the acidity in the berries to create blue spots or streaks in your baked bread. My wife noticed it, and we googled the answer. Your bread is still totally safe to eat!