These French Dip Sliders use deli-sliced roast beef for a shortcut version of the classic.  The caramelized onions and au jus sauce are required, though! 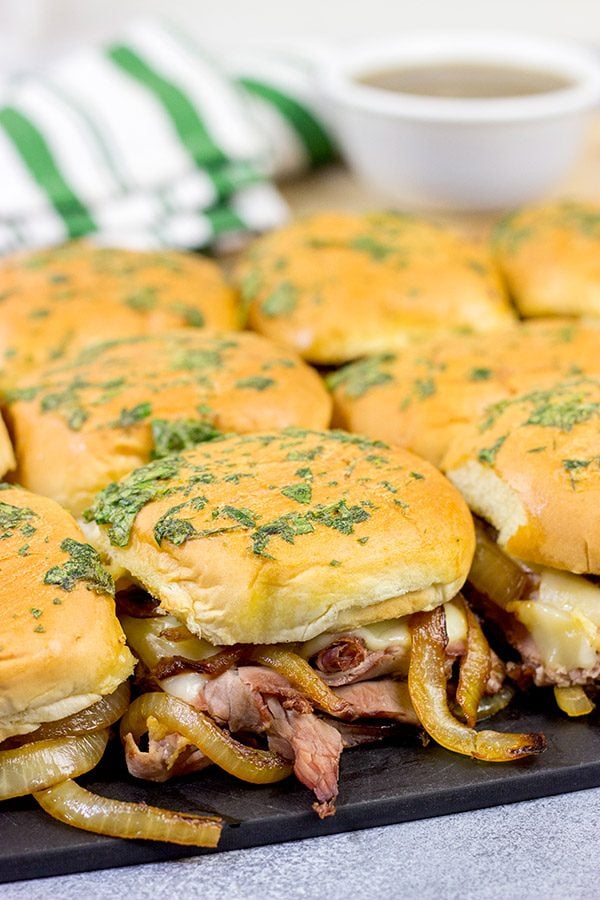 This year’s Super Bowl is right around the corner, and that got me thinking.  What sporting events are on your bucket list?  (If you’re not a sports fan, I understand.  I’m a die-hard sports fan, but some years I’m still more excited about the Super Bowl appetizer table and the commercials than the teams actually playing in the game.)  The Super Bowl is a good excuse to make tasty food and hang out with friends during what is typically a cold, dreary time of the year.  And I’m all about friends and food!

Sure, the Super Bowl gets a ton of media attention every year, but for me I put the Super Bowl as #5 on my bucket list of sporting events.  I’m a college sports guy.  I grew up in the South where nearly every car has a sticker, license plate or car flag supporting one of the local college teams.  In fact, after moving to upstate New York, I was struck at the lack of interest in college sports.  Up here, pro sports reign supreme.  We’re equal distance from NYC and Boston, so we get plenty of Yankees-Red Sox and Giants-Patriots rivalry talk.  But I’m still a college sports guy. 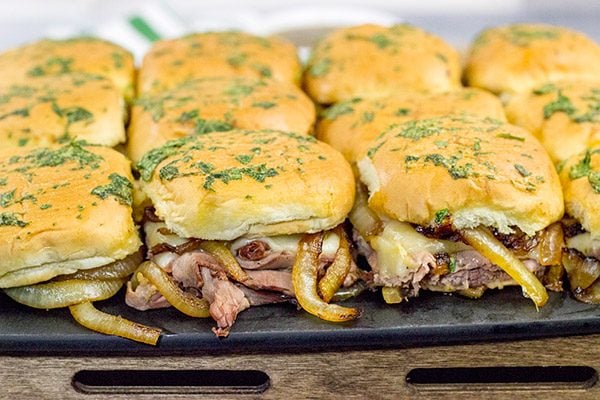 For me, the College Football Championship Game comes in at #4.  That is unless my LSU Tigers happen to be playing in the game…and then it jumps up to #1.  #3 is the NCAA Baseball Tournament.  College baseball wasn’t even on my radar until I moved to Baton Rouge, LA.  I started going to LSU baseball games as something to do outside of football season.  That’s when I realized I love college baseball.  I’m not a fan of pro baseball (too boring!), but college?  Any day of the week!  If you’ve never been to a college game, then put it on your radar for sure.

Next up at #2 is the World Cup.  I’m a huge soccer fan, and I religiously watch all of the World Cup games every 4 years.  Lucky for me, Canada/US/Mexico will co-host the 2026 World Cup, and I’ve got plans to attend one of the games.  Bonus points if one of the teams playing is the US, Italy, Belgium or the Netherlands.  Honestly, though, I’d be happy regardless of the teams. 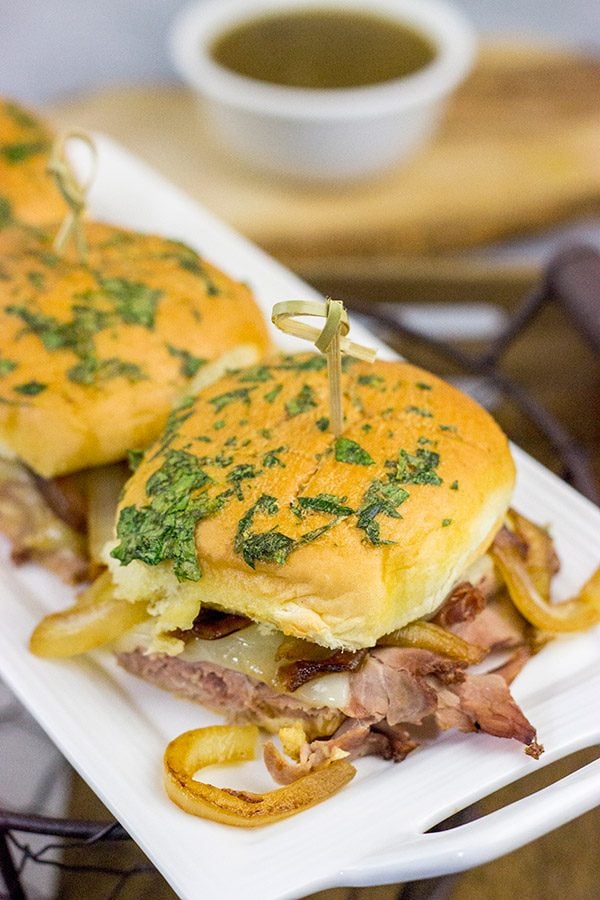 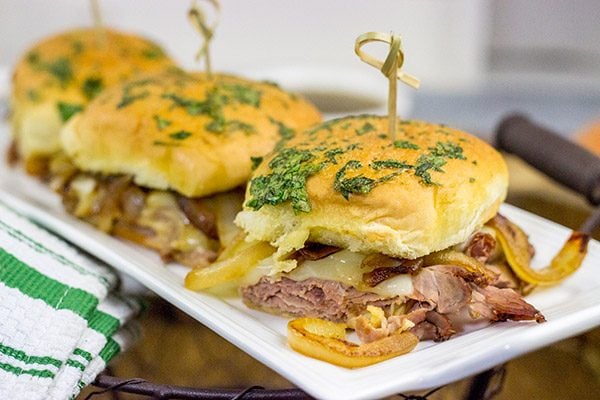 Ok, so that was a really long-winded way of saying that I love sports.  I rarely actually go to games, partly because of where we live and partly because of the cost.  But I do watch a lot of sports on tv.  And we all know that watching sports goes hand-in-hand with tasty food, right?  That’s where these French Dip Sliders come in!  Hand-held sandwiches packed with flavor?  And a dipping sauce, too?  Sign me up for a batch of these French Dip Sliders!

I posted our recipe for French Dip Sandwiches a couple of years ago.  Those sandwiches are delicious!  But a classic French Dip requires slow-cooking a beef roast.  I wanted to make something a little easier for these sliders, so I opted for deli-sliced roast beef.  (I used Certified Angus Beef ® brand roast beef.)  The caramelized onions and au jus dipping sauce are both important elements of a good French Dip, so I knew those needed to be included here! 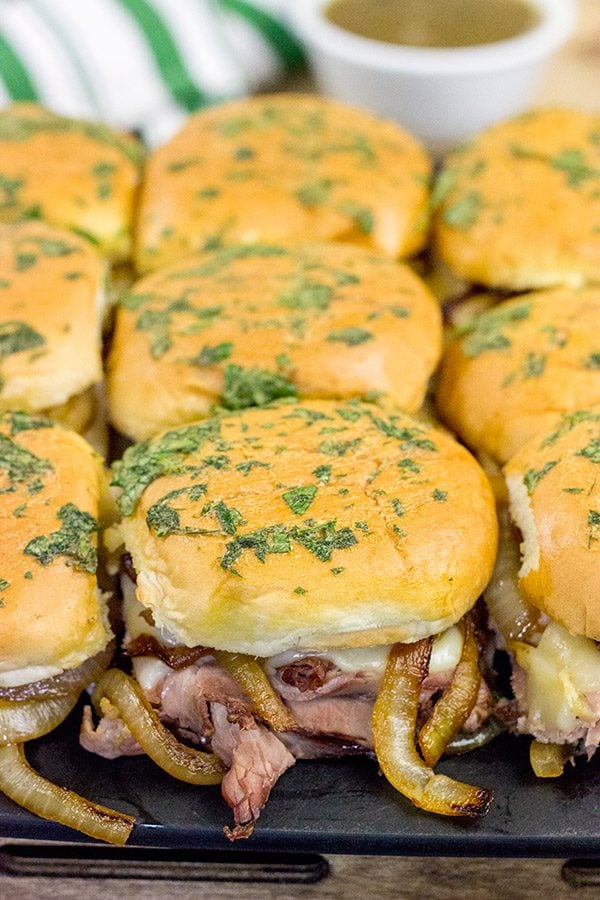 For the caramelized onions, I just sliced a couple of yellow onions and let ’em cook down while I assembled the rest of these French Dip Sliders.  Not too bad, and those onions were good enough to eat by themselves!  (I might’ve snacked on a slice or two.)  And for the au just sauce, I created a shortcut version using beef stock and some seasonings.  That sauce reduces down while the French Dip Sliders are baking.  Once everything is done, you’re left with one epic snack for watching sports…be it the Super Bowl, the Final Four or the sporting event of your choice!  Enjoy, friends!

If you make these French Dip Sliders, swing back by and leave a comment.  Or snap a photo and tag me on Instagram (@Spicedblog)!

Love Super Bowl appetizers?  Check out some of these other favorites, too: