This Classic Cheesecake features a simple graham cracker crust, and it’s good enough to serve by itself.  (Or you can top it with fresh fruit to make it an extra-special dessert!) 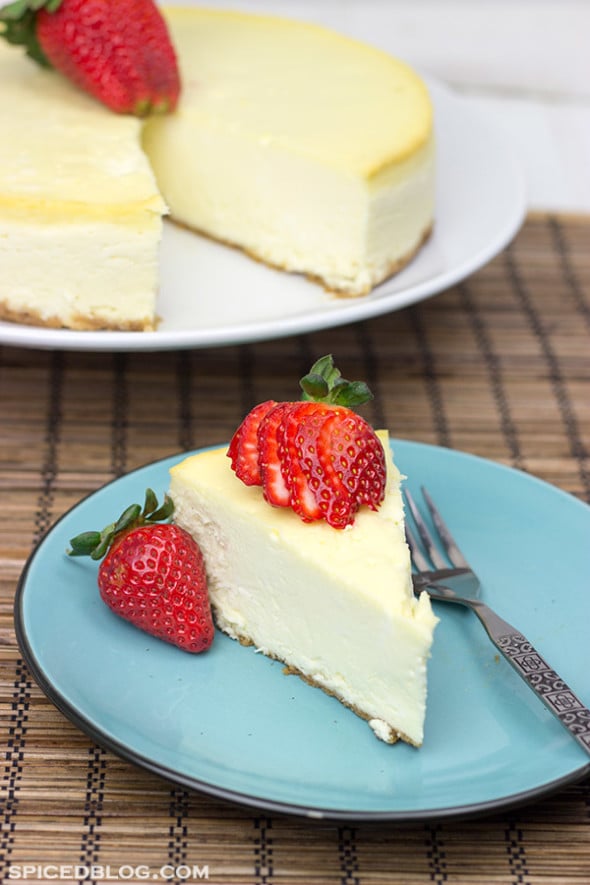 Why is cheesecake so darned good?  Cheesecake seriously might be my favorite dessert…and that says a lot because I’ve got more than one sweet tooth.  I know there are tons of cheesecake variations out there, but I almost always go back to this classic version whenever I have a cheesecake craving.  It’s plain and simple and makes a great dessert all by itself.  Or you can make it extra-special by adding some fresh sliced fruit or chocolate curls.  Or just throw caution to the wind and go all out with both fruit and chocolate.  (I’m thinking white chocolate curls with sliced strawberries would be pretty amazing!)  Either way, this is my go-to cheesecake recipe, and it makes regular appearances in my house!

While this recipe does call for sour cream, this cheesecake isn’t considered New York style because it bakes at a consistent, low temperature.  (New York style cheesecakes are baked in a very hot oven for about 10 minutes and then at a much lower temperature for another hour or so.)  I find that the method used in this recipe produces a reliable cheesecake, and I don’t have to worry about it cracking in the oven.  Yes, it does use a water bath…but that’s not nearly as hard as it might sound! 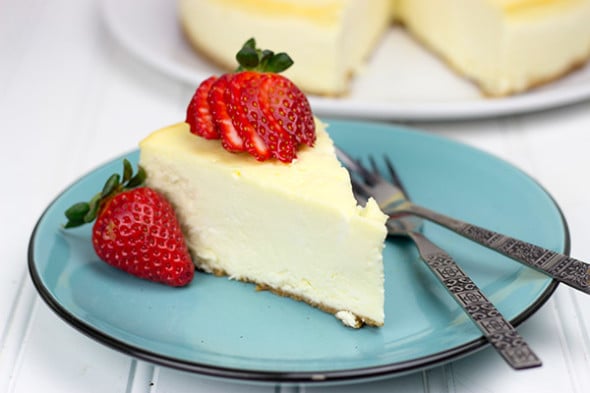 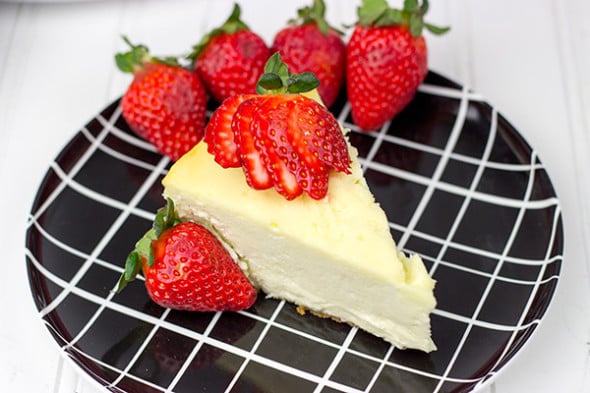 There are a couple of recipe notes that I wanted to include here.  I don’t actually like lemon in my cheesecake, so I leave it out.  (I personally find that lemon in cheesecake makes it taste too much like danish filling.)  If you like lemon in your cheesecake, then feel free to add a tsp or two of lemon juice or lemon zest.  I opted to go with the classic graham cracker crust this time, but I also frequently make this cheesecake with an Oreo crust.  (That post also shows how I used a teapot to make an easy water bath.)  And finally, the secret to baking a cheesecake that doesn’t crack is….underbake it slightly.  Yup, pull that bad boy out of the oven when there’s still about a 1″ ring of “looser” filling left in the center of the cake.  The cheesecake will continue to cook for a bit after you pull it out of the oven.  I also wrap the entire cheesecake (pan and all) with plastic wrap while it’s still slightly warm.  Then I freeze it overnight.  I’ve found that this makes it very easy to get a perfect-looking cheesecake out of the pan.

For the Graham Cracker Crust
For the Cheesecake

For the Graham Cracker Crust
For the Cheesecake