What is it about  frigid weather that makes me crave citrus fruit?  There’s probably a medical explanation for this involving Vitamin C or something…but I’m not a medical expert.  All I know is that once winter arrives, I eat oranges, pineapples, and grapefruits like they’re going out of style!  Oh, and pears…I can’t forget the pears!  The good news for me is that most of these fruits are in season during the winter…so they’re not too hard to find at the local market.  I also happen to love breakfast food, and there’s something to be said for a simple piece of toast topped with a delicious homemade jam or marmalade.  Last weekend, I got inspired and decided to combine my love for winter fruits with my love of toast…and the result was this delicious Citrus Pear Marmalade.  It’s now a new favorite in my house…and I’m fairly certain that a jar of this marmalade will have a permanent spot in my fridge during the winter months!

Marmalades typically include bits of the whole fruit suspended in the jelly, but I chose to fully puree the pears when I made this Citrus Pear Marmalade.  You could save one of the pears and chop it into 1/2″ cubes if you like having bits of fruit in your marmalade.  This marmalade does still have some bits of fruit in it because I didn’t puree the canned pineapple.  This was a personal choice, and you could certainly vary the way you make it depending on your own preferences.  No matter how you make it, this marmalade will be a great treat alongside your cup of morning coffee! 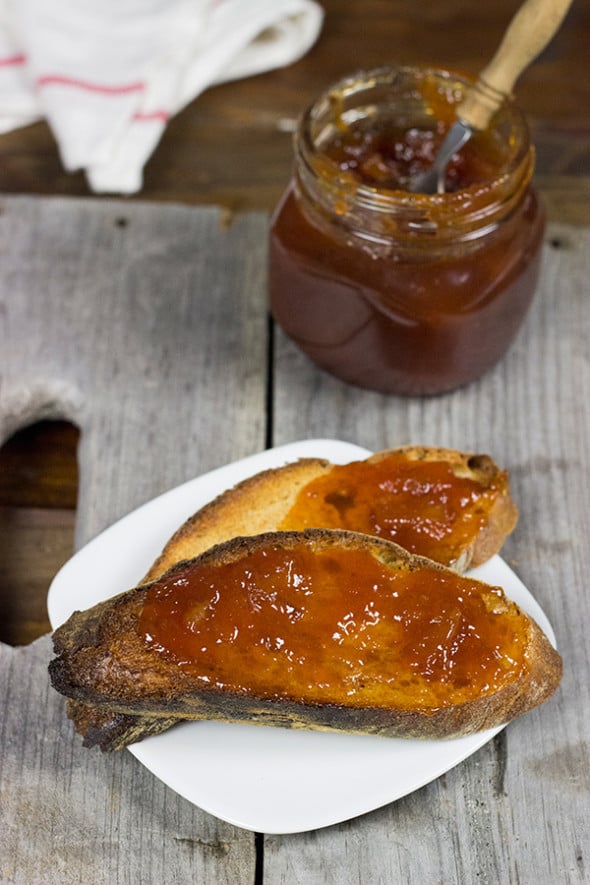 Recipe note: Making jams, jellies, and marmalades at home is a lot easier with a candy thermometer.  If you don’t own one, go get one!  For instance, this Citrus Pear Marmalade needs to heat to 220°F before it’s done.  That’ll take about an hour or so on medium-low, but it depends on your stove’s temperature settings, etc.  Sugar changes characteristics as it heats (i.e. think about caramel), so it’s important to know that you’ve reached the desired temperature.

If you’re looking for a good bread recipe to use as toast with the Citrus Pear Marmalade, then I strongly recommend this Classic White Bread or this Whole Wheat Sandwich Bread!  Aside from a topping on toast, this marmalade would also make a great addition on top of a cheesecake or (for a savory option) a grilled pork tenderloin.  Enjoy!

Tip: Use a wooden spoon to stir the marmalade frequently...especially as it thickens. The thicker it gets, the faster it will burn if you don't stir it!