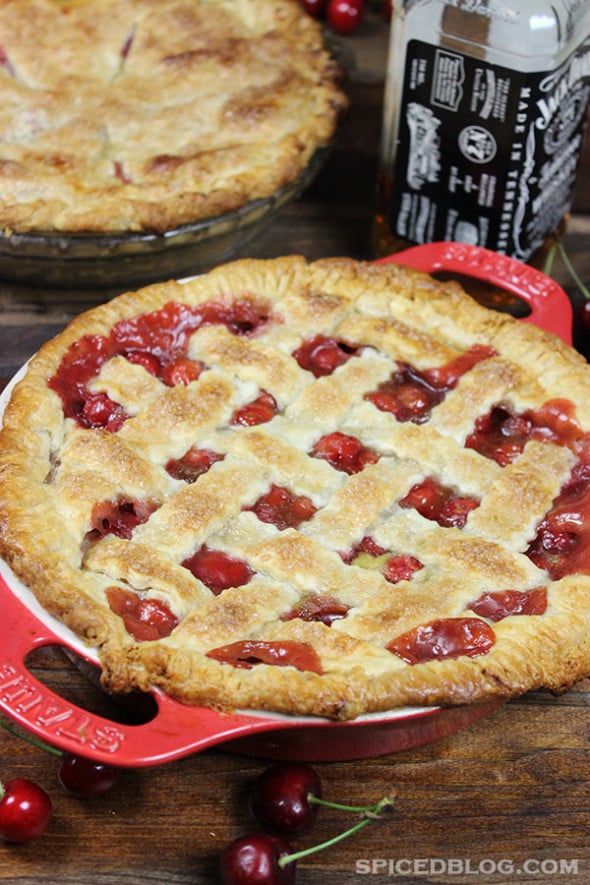 I’m a big fan of bourbon.  In fact, one of my go-to drinks is a glass of bourbon with a simple garnish of a cherry or two.  I’m also a big fan of sour cherry pie.  So the other day, I got to thinking…what if I combined these two and created a sour cherry pie using bourbon as one of the ingredients?  I hit the kitchen to do a little playing around, and a couple of hours later, I had this Bourbon Sour Cherry Pie.  Inititally, I was a little afraid that the taste of the bourbon would overwhelm the cherry filling.  (After all, you have to heat the bourbon when making the filling…and heated bourbon is a pretty potent smell!)  But once the pie came out of the oven, the bourbon had mellowed a bit and created a nice balance with the sour cherries.  Don’t get me wrong, the bourbon flavor is still there…but it doesn’t overpower the pie like I was afraid it might.  So if you have someone in your life who loves bourbon, give this pie a shot.  It’s different and unique…and quite tasty if I say so myself!

When making fruit pies, I typically just put a full crust over the top.  But this time, I decided to go in a slightly different direction.  I had a bit of extra time, so I went with a lattice top for this pie.  (If you don’t want to make the lattice top, you could certainly just use a full crust instead.)  Lattice topped pies look amazing, and honestly they don’t require that much extra time.  Just roll out the second piece of pie dough like normal, and instead of covering the pie, just cut the dough into 3/4″ to 1″ strips.  The first step is to lay out 5-6 parallel strips of dough across the pie.  Then simply fold back every other strip.  Lay a new strip of dough perpendicular to the first 5-6 strips, and then lay the previously folded strips back down.  Next, fold back the alternating parallel strips, lay down a new perpendicular strip of dough, and continue this process in both directions until the lattice-top is done.  I know this probably sounds really confusing, but it’s not!  (It’s a lot harder to write it out than to do it…trust me!)  Take a look at the collage below for a visual guide in how to make a lattice-top for your pie. 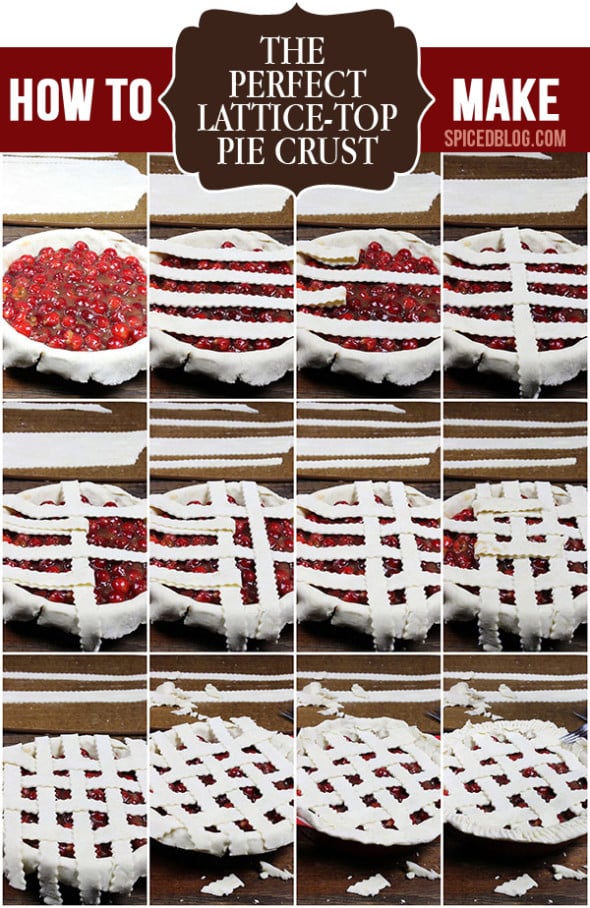 For the Pie Dough
For the Filling

For the Filling
For the Pie Dough

Note: If bourbon is not your thing, then simply replace the bourbon with 3/4 cup of water. (For added flavor, you can mix the reserved juice from the cherries with water. Just make sure that the total liquid still equals 3/4 cup!)